The Nissan e-NV200 steps up a gear

With the popularity of all-electric vans in the UK growing quickly, how does the bestselling Nissan e-NV200 keep ahead of the pack? Quite simply, it offers a big 60% boost to its range to 124 miles and offers a larger battery than its predecessor. But with its rivals entering the all-electric market with some cracking creations, is time running out for the e-NV200?

There’s no doubt that the e-NV200 has been a popular choice and helped to break down many barriers to firms taking up all-electric vehicles and while the battery-powered van is still a sound choice, the differences between it and its rivals in the conventional engine ranges, will soon apply to the all-electric sector as well.

There will be delivery firms looking at potential new regulations to limit emissions within cities so they’ll need to invest in either low or ultra low emissions vehicles sooner or later.

On top of this, all-electric vans also offer much lower running costs, usually around 2p per mile, and for those firms that install solar panels then the potential savings could be even greater. While the Nissan e-NV200 is a great van, is the 2018 model good enough to see off its rivals?

For those firms wanting a reliable van then the Nissan e-NV200 makes for a great choice. The original van has done a lot to encourage firms and van owners to enter the all-electric market and the new offering maintains its 705 kg payload and decent levels of performance. It’s a great van to operate around town where the electric motor delivers all of its power from a standing start and it is also nice and quiet to drive in heavy traffic. Problems arise when driving at speed on motorways and like many other vans it has a tendency to bounce when empty. The new 40kWh battery can be recharged in less than hour to 80% – otherwise it’s a 7.5 hours charging time.

The e-NV200 is available either as a panel van with wide opening rear doors and sliding panel doors or a five-seater with a cargo capacity of 1.9 m³. For those who need it for carrying people, then the Combi seven seater, plus all their luggage, offers an interesting choice.

If you like the Nissan e-NV200 then have a look at the new Ford Transit Connect or the VW Caddy.

One of the big attractions for running an all-electric van is to enjoy very low running costs which equate to 2p per mile. If you have solar panels installed then these costs can be made lower. Also, there’s not much downtime since there are fewer moving parts to maintain or go wrong. The new 40 kWh battery will deliver a range of up to 124 miles, that is 60% more than the predecessor offered. The real world operational equivalent should be around 100 miles, even in the depths of winter when the heater is operating and other electrical items are plugged in. Another issue worth noting is that Nissan is highlighting that the e-NV200 has a unique bidirectional charging capability to help generate extra revenue – so, when the van is charging at times when energy costs are low the difference (ie the spare charge left in the battery at the end of the day) can be sold back to the National Grid at peak times.

The Nissan e-NV200 has a five-year vehicle warranty while the battery has an eight-year capacity warranty which make it an attractive proposition.

As with the Nissan NV200, there is plenty of space in on-board the e-NV200 for two Euro pallets and a 705 kg payload. Access is easy enough into the cargo space – the capacity is up to 4.2 m³. Access to the cargo area is easy since it just 153 mm from the ground.

The Nissan e-NV200 offers an optional folding bulkhead and lots of technology. There’s an app to control remotely the charging process and everything in the cabin is ergonomically designed for comfort. The gear stick is conveniently situated and there’s a good infotainment system on board; the firm’s NissanConnect satnav plans a route effectively and there’s the option of a rear view monitor.

Van and fleet operators will be attracted to the Nissan e-NV200 because it is great for our environment and in those areas where emissions and air quality are becoming increasingly important. The van’s low running costs also highlight the performance levels which, when driven around town when fully loaded, are very impressive indeed. That’s because the power is available as soon as the driver depresses the accelerator and it’s a silent and smooth van to drive in heavy traffic. While it’s a nimble operator around town, some drivers may find issues with the van’s performance at speed on a motorway over a long distance where it lacks purpose and the steering doesn’t quite offer the feedback its rivals do. Regardless, the e-NV200 is a stable and well-made van that will offer owners a reliable vehicle with low running costs – while its rivals are quickly catching up the performance and load carrying abilities mean the e-NV200 will be around for some time yet. 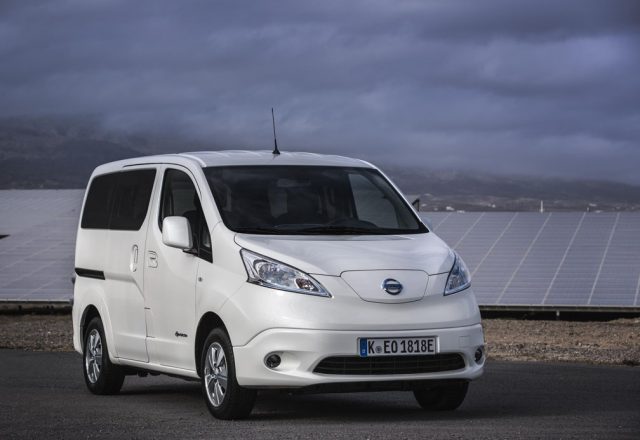 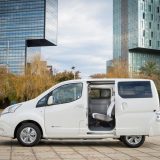 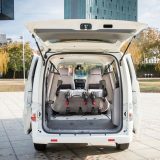 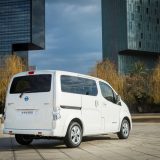 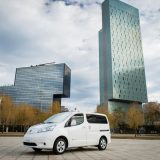 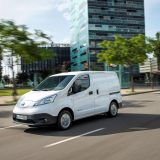 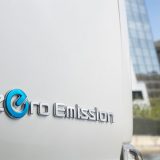 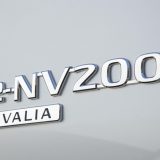 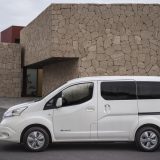 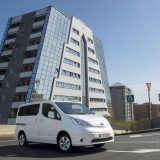 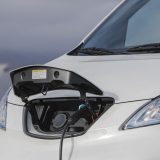