Peugeot Bipper is a practical van that’s cheap to run

The Peugeot Bipper is made in the same factory as its siblings, the Citreon Nemo and the Fiat Fiorino, but it doesn’t have the same range of models or engine choices for its line-up.

Indeed, the choice is just limited to one model fitted with a 1.3HDi turbodiesel engine.

Having said that, there are three trim levels and the engine offers decent performance and economy.

On top of that the small van also has a load space of 2.5 cubic metres and a payload capacity of 660kg which is easily accessed via the twin rear asymmetric doors which open to 180 degrees.

Around town the Bipper is an impressive van with many owners being impressed with the load space that is available.

The Bipper is a good performer on long journeys though its cabin, which is sturdy and well made, also reveals that this is an old van. Newer rivals have cabins similar to family cars, and handling to match, but the Peugeot Bipper is a solid and dependable workhorse.

The Peugeot Bipper is a decent all-round performer which is worth a closer look for anyone interested in a compact urban van.

It’s very similar to its rivals produced on the production lines alongside it but the Bipper has a better cabin and feels like a stronger performer with a full payload on board. It’s also got an impressive turning circle.

Of the three trim levels, the Professional makes for the obvious choice because it has more standard kit on board for the premium being charged and for what the extras would cost as options.

And, let’s not forget, that the Peugeot Bipper was voted as the International Van of the Year in 2009.

If you like the Peugeot Bipper then have a look at the Ford Fiesta van, the Citroen Nemo or Renaulyt Kangoo.

There’s no doubt that the Peugeot Bipper’s punchy 1.3litre HDi turbodiesel is a strong performer, especially in towns, but it should also return 63mpg while having CO2 emissions of 119g/km.

There is a more frugal version available which help boost economy in the SE trim of the Bipper which uses stop-start technology to push economy to 69mpg. CO2 emissions also drop to 109g/km for this version.

The engine itself is a renowned offering and Peugeot offer its Bipper with a 100,000 mile or three year warranty.

Service intervals for the Peugeot Bipper are set at 20,000 miles.

The Peugeot Bipper might be a compact urban van but there’s 2.5 cubic metres of space on board. The payload is 660kg and drivers will find a useful array of six tie-down hooks in the load area.

Access is easy thanks to the big rear asymmetric doors and there’s also a useful side sliding door too.

The Bipper also comes with a durable plastic floor covering in its loadspace as standard and owners will find that the cargo won’t pose a problem for the engine which has plenty of torque at low revs.

The Peugeot Bipper comes with a driver’s ladder frame protector as standard and there are options for a half-height or full height steel bulkhead which can also come with a mesh grille or glazed.

There’s also ABS and electronic stability control fitted and there’s a driver’s airbag but it’s an option for the passenger.

Opt for the ATV version of the Bipper and the firm’s Grip Control comes as standard which is a useful feature on wet or snow-covered roads when that extra bit of grip is needed. The feature uses electronic differential to assist in poor conditions.

The Peugeot Bipper might just have the one engine in the shape of the 1.3HDi turbodiesel but it will do everything the driver will need. It’s a great performer around town and its 75bhp capabilities will shift even a full load.

The only downside is that the Bipper can get noisy at speed on the motorway but it’s not too intrusive.

The power assisted steering helps deliver an enjoyable drive and despite the dimensions of the van, there is enough room on board for tall occupants. The steering itself is lighter than the Nemo, which is a surprise, but it’s very good at tackling tight corners and there’s little in the way of bodyroll.

The suspension is also a different set-up and is firmer in the Bipper which means that big pot holes will be felt in the cabin.

Among the options list is one for a multi-flex folding flat passenger seat which makes sense for the times when extra-long loads need to be carried and the seat will fold flat for this to happen. This addition will see the load volume increase to 2.8 cubic metres.

The Bipper comes with a standard manual gearbox with five speeds or the firm’s electronic gear control (EGC) which is an automated manual which is effective and doesn’t have a clutch pedal.

The Peugeot Bipper comes with a decent well-made cabin and there’s a good range of options for all of the models though the comfort pack, which includes lumbar support and armrests among its attractions is probably worth going for.

Other models have air con, Bluetooth connectivity and there’s also a radio and CD player.

The SE trim model comes with heated door mirrors, an integrated A5 clipboard and a steering wheel that has reach and rake adjustment.

Peugeot have also fitted a useful 12v socket in the cab to help power items such as a laptop.

Get a Quote on a Peugot Bipper 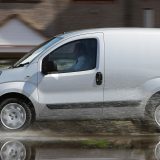 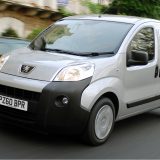