Volkswagen Caddy is practical and comfortable

Available in either long or standard wheelbase versions, both have rear door options. Most rivals also opt for the front wheel drive though there’s an excellent all-wheel drive option with the firm’s 4Motion system – an excellent choice for those who need to go off the beaten track. Overall, there’s a lot to like about the Caddy and it’s a stylish, well-made van that will meet most potential owner’s needs.

While it’s competing in a popular segment, the Volkswagen Caddy has a lot to recommend it, mainly with the solid build quality and lots of equipment, particularly for the level of safety kit. There’s also a very good infotainment system on board as well. It’s not just as a panel van that will help it attract buyers, there’s a range of other body styles as well including a comfortable five seat Combi version. Also, for those who have a storage set up in their current Caddy, the fourth-generation model has the same load area so it’s easy to transfer the fittings between the two vans. That’s a big consideration for some small firms who invest in quality shelving and the like.

If you like the Volkswagen Caddy then consider buying the Mercedes Citan, the Ford Transit Connect or the Citroen Berlingo.

A panel van that can return 61 mpg is going to be a popular choice and the Volkswagen Caddy has a range of diesel engines that are capable of doing this. Officially, the economy figures for the diesel units are between 55 mpg and 61 mpg while for the very good petrol engines, the economy figures are 47 mpg and 53 mpg. It is possible to boost economy with the BlueMotion models which have improved gear ratios and low rolling resistance tyres to help boost the figure to around 70 mpg. The engines are mated to either a five or six gear manual box or there’s the optional automatic transmission which delivers smooth changes and a faster performance. There’s a warranty for three years of 100,000 miles, though the first two years have no mileage limit. The warranty also covers the firm’s factory fitted extras.

The load volumes for the Volkswagen Caddy range from 3.2 m³ to 4.2 m³ though there’s no high roof option which means it doesn’t quite match some of its rivals for load space. The maximum payload for the range is 857 kg which is quite impressive. The wheelbase options are 2,600 mm for the standard while the maxi has a wheelbase of 3,006 mm. The load length is around 1,779 mm.

The load area is accessed by split side hinged rear doors and there’s also a sliding side door capable of taking a Euro pallet lengthways – though some rivals carry more and are easier to load. There’s also the option of having a second sliding door fitted.

To help the Volkswagen Caddy stand out from the crowd, the van has an impressive range of driver aids and safety kit. Among the systems is one that detects an imminent collision and will apply the brakes accordingly, while another system will monitor for potential obstacles and sound a warning when they are close. The van also has emergency city braking, which could prove helpful. Options include adaptive cruise control, driver alert to ensure the driver is not too tired and light assist which dips the main beams. Some drivers may find the option of a reversing camera will make the van safer a sound choice though the large door mirrors help manoeuvrability. Also, the VW Caddy is the only van in the segment that offers both passenger and driver front airbags with curtain and side airbags.

With a good range of engines and power outputs, the van offers nice levels of performance and is comfortable to drive on long journeys. Indeed, while many of van makers will promote their van as having car-like handling, the Caddy really does deliver in this respect. The van is composed and handles well around town. The lower powered engines are sound buys but the more powerful engines are where most buyers opt, particularly for the 101 bhp engine. It also delivers more power across the rev range and when the van is not loaded, it’s a lively performer. The suspension is also noticeable and deals with rough roads well. For those using the Caddy in urban areas, the tight turning circle may prove a boon and it’s also an agile performer along tight streets.

The cabin for the Volkswagen Caddy is hard to beat and the latest incarnation offers comfortable seats and hard wearing fabrics. The van’s build quality is impressive and the layout of the interior makes it a comfortable place to be with the controls close to hand. The entertainment system, particularly on the higher spec models, is easy to use and impressive. As should be expected for a small van that’s probably going to be used for urban deliveries, there’s plenty of storage areas in the cabin and a holder in the dashboard for paperwork. There’s also a large overhead shelf, a covered glovebox and useful wide door pockets. Other standard additions include a speed limiter and cruise control is fitted as standard. 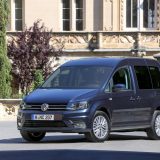 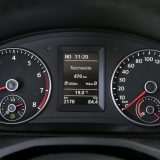 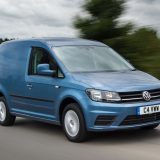 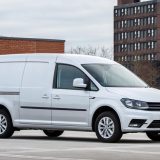 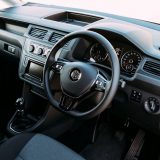 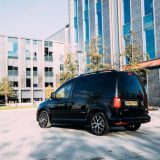 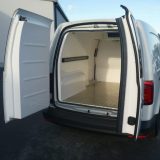