The price and specification for the new Peugeot e-Expert, a mid-size electric van, have been revealed by the manufacturer.

The starting price is just over £25,000 and there are three load lengths and two battery sizes to choose from.

Potential owners also have a choice of two body styles for a van that has a potential range of 211 miles.

New e-Expert has been developed for urban users

Peugeot says its new e-Expert has been developed with urban users in mind, so it’s for those firms doing lots of drops and mileage around town.

It’s also likely other towns and cities will follow suit with restrictions on diesel and petrol powered vehicles in their centres and there’s also the growing possibility of pollution legislation being introduced to help force firms and commuters towards using cleaner vehicles.

The new e-Expert is very similar to the diesel sibling, except for the unique grille, blue tinted badging and the front wing’s charging port.

It’s also virtually identical inside with the instrument binnacle being redesigned to show energy consumption and flow, as well as the battery level. 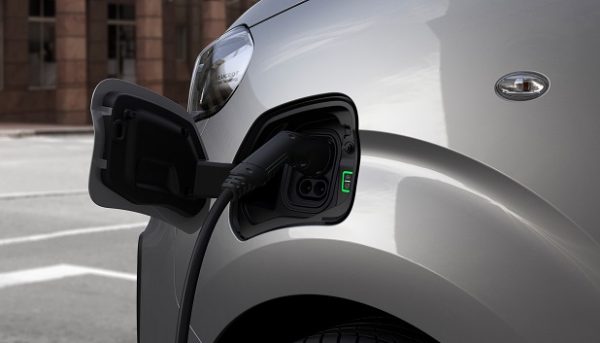 Buyers of the Peugeot e-Expert get to choose from three trim levels, the entry level S is only offered in standard wheelbase length, though there’s a choice of either a 50 kWh or a 75 kWh battery size.

Other trims include the Professional, which has a 7-inch touchscreen, DAB radio, smartphone connectivity and a coffee break alert. The van also features extra storage features and the central seat folds down to become a writing table.

The Peugeot e-Expert shares the same platform as the already revealed Citroen e-Dispatch and the Vauxhall Vivaro-e.