Citroen Berlingo is a van on a mission

The Citroen Berlingo has been hugely popular since launch with a good reputation for reliability and load-carrying abilities.

Many people will confuse it with the Multispace people carrier which is also a very good vehicle and which is based on the van.

There are two van sizes on offer in the Citroen Berlingo range which offer potential owners a wide variety of choice.

The Peugeot Partner is built at the same factory and they have several similarities but the Berlingo is a different creation though, just to confuse things, it’s actually based on the Citroen C4 platform.

By basing it on an established car, the Citroen Berlingo has a good car-like performance and offers a comfortable ride and the engines offer power and refinement – even with a full load they perform well and return decent economy figures.

The cabin itself takes a lot of design cues from other Citroen cars to help make it a pleasant and effective way to spend a lot of time behind the wheel.

There’s a decent amount of load space thanks to the two lengths available and the Citroen Berlingo also comes with an excellent range of factory fitted options including carrying racks and refrigeration options.

The vehicle also brought in the third passenger seat option, though in this set-up it’s a rather cramped affair, and there is a flap in the roof to help carry longer items such as poles which helps to make the Citroen Berlingo a versatile vehicle.

While the van is up against some very stiff competition, it’s a well-established and successful model that has a strong following, though it’s beginning to look dated against its newer competition.

However, the Citroen Berlingo is possibly one of the best handling vans in its segment and it offers a decent load space and payload abilities to make it a worthwhile and practical investment.

If you like the Citroen Berlingo, then have a look at the VW Caddy, Mercedes Citan or the Ford Transit Connect.

The Citroen Berlingo is a fairly cheap van to run, only the Renault Kangoo has better economy figures, and most owners with the Airdream diesel engine should get around 63mpg with other diesels returning around 50mpg to 55mpg.

Costs can be even lower should owners opt for the electric version of the Berlingo but the range is limited to 100 miles but that will cost around £2 to charge the battery.

Service intervals are set at 12,500 miles or 24 months, whichever is first, and insurance costs are low since the Berlingo has been placed in the 1E to 3E insurance group.

The length of the load space on the Citroen Berlingo is 1,800mm which is a useful space to utilise but it can be extended to 3,000mm for long loads by removing part of the bulkhead and/or passenger seat.

On the standard panel van, load space is 4.1 cubic metres which means there’s enough load space on board to fit a standard Europallet between the wheel arches and some models can carry two pallets easily.

However, the side door on some models isn’t wide enough for a pallet to fit through but these can be loaded from the rear.

The rear doors open wide for easy access and there’s the option of a roof flap to accommodate things like ladders when needed.

The standard bulkhead for the Citroen Berlingo is a ladder-type one rather than a full steel bulkhead though this is an option. There’s also the option of a half-height steel bulkhead which has removable panels and a steel mesh upper part.

Surprisingly, electronic stability control isn’t fitted as standard across the range and is only fitted to some models.

A driver’s airbag is fitted as standard and some get the passenger airbag also but it’s an option on other models.

There’s not much choice when it comes to engines for the Citroen Berlingo with just a 1.6 litre petrol unit with 95PS on offer and a 1.6 litre diesel variant with 75PS and 90PS power outputs.

The diesel engine has an economy of 55mpg though there’s also the Airdream 625 LX e-HDi 90 unit available which has a stated fuel economy of 63mpg. Its CO2 emissions are 118g/km.

There’s also the option of an electric version of the Citroen Berlingo which has a range of 100 miles.

Of the engines, the hybrid 1.6 litre Airdream diesel is perhaps the best all-rounder while the petrol unit is probably best suited for town driving – it has plenty of pull at low speeds.

The Citroen Berlingo itself is easy to drive and comfortable on long distances with light steering that’s accurate and engaging. There’s also little in the way of bodyroll on tight corners too.

There’s the option of XTR+ being fitted to the van which is electronic stability control though a sophisticated system that helps to provide improved grip on difficult conditions by adjusting braking power to the van’s wheels via a limited slip differential. It’s a good performer on snow, for instance, with its raised suspension and winter tyres.

For those vans without the full steel bulkhead, the road noise can be an issue especially at speed and on long journeys.

The suspension for the Citroen Berlingo is very good and with, or without, a full load it is a comfortable ride that irons out bumpy roads. This is mainly due to fact is based on the Citroen C4 platform.

Among the choices for the Citroen Berlingo is to have the rear seat that combines a sliding bulkhead in the crew van which is a clever creation which means the seats can be used for passengers or folded flat to extend the load space. The bulkhead is immovable and leg space is limited for the passengers.

The cabin space in the Berlingo itself is well-designed and comfortable and though the van was the first to bring in double passenger seats, the central seat is cramped. The gear stick is mounted low on the dashboard so the legs of a passenger in the middle seat may get in the way of it.

But there’s also plenty of storage space on board and standard kit includes central locking, power steering, electric windows and a trip computer. Other models also get cruise control, speed limiter and a folding passenger seat.

Get a Quote on a Citroen Berlingo 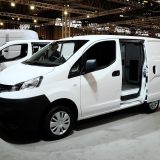