The Citroen e-Berlingo electric van will prove to be a top seller and sits alongside its siblings, the Peugeot e-Partner and the Vauxhall Combo-e to bring an impressive small van to the market. For most businesses, the e-Berlingo will have the edge when it comes to capabilities and performance when compared with the Combo-e and the e-Partner. There are a lot of similarities with the diesel-powered alternatives and with a better range, the e-Berlingo should really be road-tested by firms to ensure it meets their needs.

The Citroen e-Berlingo electric van has a 100kW electric motor and battery power for a range of 171 miles. The payload is 800 kg which should meet the needs of most businesses looking for a stylish and reliable electric van to drive around town. The diesel-powered version is an award winner and expectations are high for the new battery-powered offering. The diesel version also carries more than 1,000 kg (in some models) which may be an issue with the 800 kg of the electric version.

The Citroen e-Berlingo van is a fully electric version of the multi award-winning Berlingo van, providing business users with a zero emissions vehicle that doesn’t compromise in terms of its capabilities.

With a range of up to 171 miles, load capacity of up to 4.4 m³ and a maximum payload of up to 800kg, the new e-Berlingo van meets the needs of fleets and SME users alike. Featuring a 50kWh battery and a 100kw (136hp) electric motor, the e-Berlingo supports up to 100kW rapid charging, with an 80% charge taking just 30 minutes.

“With the e-Berlingo van, many business customers will find the ideal partner to accomplish their daily tasks in unrivalled comfort, and with lower running costs, without any compromise in terms of loads and volumes.

“After the e-Dispatch, which was recently voted International Van of the Year, and the forthcoming e-Relay, the e-Berlingo van is an important link in our electric vehicle offensive and a tangible response to the new mobility challenges for all vehicle users.”

As a small van, the Citroen e-Berlingo really does deliver on just about every need for firms wanting a comfortable and stylish small van. The e-Berlingo builds on its qualities to deliver emissions free driving which is becoming increasingly popular – particularly with growing numbers of cities introducing low emission zones, for example, London’s ultra-low emission zone (ULEZ). It should also be a cheaper van to run than its diesel counterpart, with running costs of a few pence per mile – and less if you get a cheap electricity deal. The only downside is the price tag, but the van should return years of sound service.

If you like the Citroen e-Berlingo, then consider the Vauxhall Combo-e or the Renault Kangoo ZE.

One of the big attractions for businesses to switch to electric vans like the Citroen e-Berlingo is down to the lower running costs. The average cost per mile will be 2-3p and with regenerative braking technology onboard, means the battery is being recharged regularly to alleviate range anxiety. Using a wall box, the battery can be recharged in five hours, or using the rapid charger will replenish 80% of the battery’s charge in just 30 minutes.

It’s also possible to use an app with a charging functionality feature so businesses can take advantage of the potential of off-peak electricity tariffs to deliver those important low running costs.

Don’t forget too that there’s no congestion charge or fees to pay when entering ultra-low emission zones. And the maintenance of an electric van should also be lower too with fewer parts to go wrong.

The Citroen e-Berlingo comes in two sizes. The M is 4.4m long, while the XL is slightly longer at 4.75m. It’s also available as a crew van which uses the XL model to seat up to five people.

The maximum load length can be extended with the passenger seat folding flat to 3.09m in the M model, and in the XL version, this extends to 3.44m.

The width between the wheel arches is 1.23m so the e-Berlingo van can carry two Euro pallets – one behind the other.

Citroen has managed to retain the same load volumes as the diesel-powered alternatives because the batteries are located under the seats. The load volume for the M model is 3.3 m³, and the XL version has 4.4 m³.

The new Citroen e-Berlingo offers a range of assisted driving and safety systems, and there are 16 for drivers to enjoy. For example, drivers get a colour head-up display – a rare feature in the small van market, as well as keyless entry and start. Safety features include rear and front parking sensors, an automatic electric parking brake, hill start assist and a reversing camera that has surround-view rear vision.

Another new feature for the segment is an overload indicator which many firms will appreciate, plus there’s a cruise control function with a programmable speed limiter.

And since the e-Berlingo offers car-like handling, the interior resembles a car rather than a van. There are several connected services including Connect Nav with a three-year subscription that offers real-time traffic updates. The service also brings the location of car parks and service station prices, plus weather information.

The infotainment system is smartphone compatible and there’s a Connect Assist that offers an SOS system that will contact the emergency services should it detect the van has been involved in an accident.

The Citroen e-Berlingo retains the same handling and grip of the diesel sibling and it’s a rewarding van to drive though rough roads can be felt in the cabin when the load bay is empty. It’s also a very quiet van to drive with the 50kW battery being mated to the 100kWh electric motor producing 136 HP to deliver good performance around town.

The battery has a warranty for 100,000 miles or eight years, or the equivalent of 70% of its capacity.

There’s no gear stick – just a switch for Drive, Neutral, Park and Reverse, so driving the e-Berlingo is simple. On the road, there is body roll (like the diesel version), but it always feels secure. Progress to the top speed of 84mph is swift and there are three driving modes to use. Normal will meet every day driving conditions but limits the power and torque, while Eco limits the power even further by reducing the demand on the battery from the air-conditioning and heating.

Performance mode will deliver the full battery power for great performance even when fully loaded.

The driver’s seat is high, and it is easy to get comfortable. The suspension is supple with a full load bay and the steering gives precise feedback. The turning circle is 10.8 metres.

There’s a lot of heavy-duty plastic used in the cabin – which has a lot of storage and cubby holes – and the 8.0-inch inch touchscreen looks great but can be fiddly to use while on the move. It does though give information about the state of the battery and how much range is left. 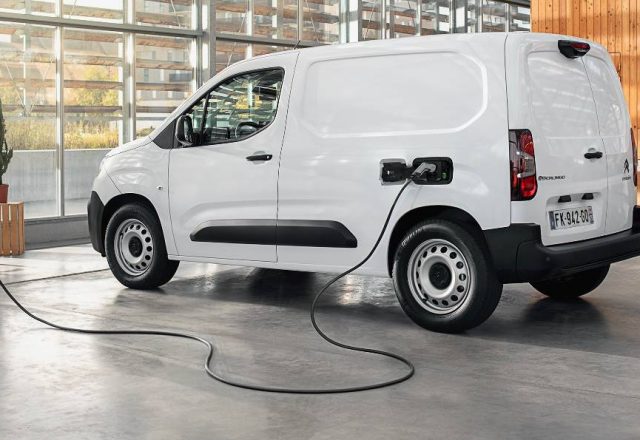 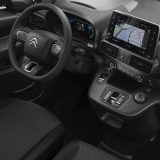 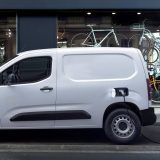 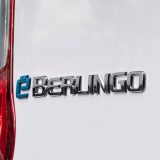 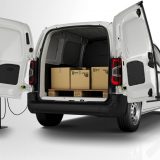 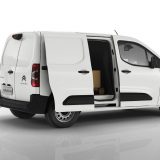 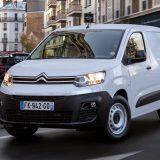