Hop to it with the DFSK Loadhopper

OK, so not many people have heard of the DFSK Loadhopper but that’s not to say it isn’t a decent van – it is but it’s also quirky, has a wide range of body styles and it’s also much cheaper than its competitors.

The DFSK Loadhopper is really a minivan but it has a load space to match its rivals but on a smaller chassis.

The big selling point is that the Loadhopper is reliable and will do just about everything owners are looking for from a budget van.

There’s a wide range of bodystyles including a panel van, double and single cab pickups and tippers as well as a minibus.

The van is a throwback to when operators had a choice of the Bedford Rascal, the Suzuki Carry and the Daihatsu Hijet and until the Loadhopper turned up in 2012 there hadn’t been a small van for the UK market for five years.

DFSK have a stated aim of building up a market and they have ambitious plans to deliver that bid – the result is a van that’s well made but basic, much cheaper than competitors and which is a fairly decent drive to boot.

Leaving aside the low price tag, there’s a lot going for this China-built van.

The microvan market used to have several makers competing in it but that’s not the case today so it’s more of a niche market but it also means that anyone looking for a small vehicle only has a few choices.

The DFSK Loadhopper might be up against the likes of the Citroen Berlingo but it’s smaller while having similar cargo capabilities.

Considering how popular microvans were at one point there might just be a revival set to take place – if so the DFSK Loadhopper is at the front of it.

Indeed, there are still a lot of minivans on the road, around 40,000, which means that owners looking for a replacement won’t have far to look.

The obvious market is for bakers, florists and gardeners and also councils and food delivery firms though with its quirky looks and manoeuvrability, it has a wider field of potential customers to choose from.

If you like the DFSK Loadhopper, then have a look at the Fiat Doblo, the Renault Kangoo and the Citroen Berlingo.

All of the DFSK Loadhopper models come with either a 1.0litre or a 1.3litre petrol engine – there’s no diesel option.

Official figures put the van’s economy at between 36mpg and 38mpg – obviously many of its rivals are cheaper to run but cost a lot more to buy – potential buyers should really sit down with a calculator and work out exactly how much they will save with this van.

In addition, the DFSK Loadhopper’s CO2 emissions are higher at 184g/km for the larger engine.

All DFSK Loadhoppers come with a three year warranty – the first two years are unlimited – and the third year is to provide cover for up to 60,000 miles.

Included in the delivery charge is a 1,000 mile service, or at two months whichever is first, and the firm also offers a three year care plan to cover labour costs and standard service items for a reasonable £399 plus VAT – roadside assistance is also included in the price.

The load space of the DFSK Loadhopper range is quite impressive – the load area for the pickup and tipper is 2,240mm for instance, for the van it’s 2,000mm and for the double cab pickup its 1,570mm.

This means the payload capability is also quite impressive: the pickup can carry 930kg, the tipper 630kg and the van 590kg.

However, despite being just 3,795mm long the DFSK Loadhopper van has an impressive load capacity of 3 cubic metres.

Of the other vans, the DFSK Loadhopper dropside has removable side panels and tailgate which offers a range of uses – especially to builders and gardeners.

Let’s be honest here: this is a Chinese-built van which is very popular abroad but it doesn’t come with all the mod cons some drivers now expect from their vans.

While it is basic and the safety kit is wanting – a driver airbag is an option, for instance, and a passenger airbag is simply unavailable, the Loadhopper is a van that feels well-built and sturdy. The van is cheap and those savings come from somewhere.

However, the driver is protected from shifting loads by the full-height steel grille bulkhead.

ABS brakes are also not fitted as standard but are available as part of an option pack.

The 1.3litre petrol engine is the one to choose for the DFSK Loadhopper as it has 77bhp and is a decent performer. It may not be as frugal as its rivals with a combined fuel cycle of 36mpg but that’s still a fairly respectable figure.

Also, the van is slimmer and taller than its rivals so there’s no current like-for-like rival out there. It’s a nippy van to run around in and the twin sliding doors are a bonus to help access.

The DFSK Loadhopper tipper model is quite impressive as it comes with three-way tipping: rear and both sides so it could find a market with builders and gardeners.

Reports so far suggest the DFSK Loadhopper is a reliable vehicle to own.

Power steering is also not fitted, it’s available as an option, but the van does have a very tight turning circle and it’s agile enough for urban deliveries in tight spots.

The only downside is that the engine does strain when there’s a full load on board but otherwise it’s a good performer.

The basic feel and approach for the DFSK Loadhopper extends to the spec for the kit as well. The interior is uninspired but it’s made of sturdy materials which should take a lot of punishment.

The seats feel firm and (very) tall drivers may have an issue with the roof height. Some models also feel tight for legroom in the rear seat.

Get a Quote on a DFSK Loadhopper 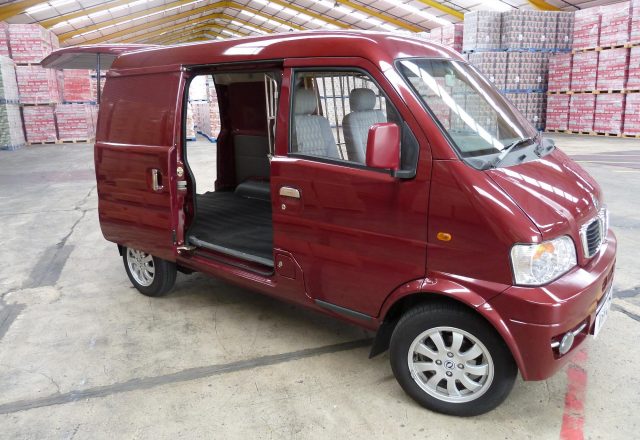 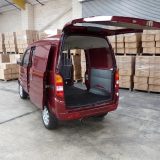 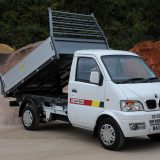 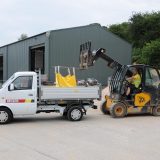 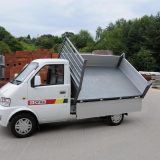 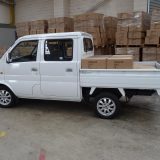 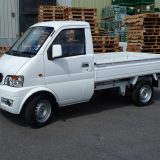