As some people say, great things come in small packages and that is so true of the Fiat Fiorino which manages to have a lot of space for such a small vehicle.

It’s made in the same factory that also produces the Peugeot Bipper and the Citroen Nemo and while all three vans share a lot of parts and design, the Fiat Fiorino has the best engine of them all.

In addition, the Fiat Fiorino is a cracking performer around town with lots of ability and it’s also a cheap van to run – most users should get around 66mpg from the diesel engines though economy is lower for the petrol version.

However, not having electronic stability control fitted as standard across the entire range may be problematic to some though it is an option and many buyers will find that the equipment specification is quite generous and the overall package is quite striking.

The Fiat Fiorino is a small van that provides a lot of options in terms of space and payload and it is certainly a good performer.

While it’s great around town with its abilities, the Fiorino isn’t quite so comfortable over long distances though it’s still a creditable performer at high speeds on short journeys.

Along with its excellent handling, the van also has a decent amount of kit on board, particularly for the models at the top end of the range.

In addition, it’s a very cheaper van to run but perhaps its greatest attraction is that its payload will easily match some of its competitors in the next segment up which will make it an attractive purchase for many who get a very well made van capable of carrying payloads off 660kg.

The Fiat Fiorino is powered by the firm’s 1.3 litre MultiJet diesel engine, which is a great performer, and unlike the Nemo or the Bipper, the Fiorino has the 95bhp version of the excellent engine all to itself.

The Fiorino also comes with a 75bhp output version of the 1.3 litre MultiJet and should return around 66mpg on the combined cycle and have CO2 emissions of 113g/km. This engine can be ordered with stop-start technology which is fitted as standard to the 95bhp engine.

In addition, there’s also a 1.4 litre petrol engine which has 73bhp should return around 44 mpg.

The Fiat Fiorino comes with a three-year, or 120,000 miles, warranty and oil change intervals are 21,000 miles. Fiat also point out that repair costs are low.

It is hard to believe that a vehicle that is just 3.8 metres long can offer 2.5 cubic metres of load space though this can be extended by folding the passenger seat to 2.8 cubic metres.

Opt for the Fiat Fiorino Combi and buyers have the choice of a second row of seats that can be easily folded flat to create extra load space and in the Cargo model the passenger seat can also be folded to create more space.

On some models a sliding side door is fitted as standard which makes access easier and loading is easy since the ground to floor height is 530mm. There’s also an option to fit a second sliding door on board.

The Fiat Fiorino will carry a payload of 660kg which will match the cargo carrying abilities for vans in the next sector up such as the Renault Kangoo.

There are two versions of the van; the M1 is effectively a car-like specification and offers 175kg payload capacity but will seat five people while the N1 version will see for and carry 293kg.

A ladder bulkhead is fitted as standard on the Fiat Fiorino though there’s the option to have a glazed bulkhead and a full panel version.

Safety features include a driver’s airbag, and while electronic stability control is a standard feature on some models it’s an option for others.

There’s also ABS brakes with electronic brake force to distribution which should help in an emergency while other safety options include rear parking sensors and extra airbags for the passenger and side impact.

Fiat also provide the van with its Traction+ as an option which helps to provide extra grip for journeys over slippery conditions such as muddy lanes or work sites.

The first thing to notice is that the Fiat Fiorino is a nippy and agile performer; it’s excellent in urban environments with busy streets and the engines perform well even with a full payload.

So while the Fiorino is an excellent performer in towns it is a rather lacklustre out on the motorways at speed and over long distances.

Having said that Fiat haven’t designed it for that purpose though still quite good at high speeds on shorter journeys.

Whether the van is full or empty, the vehicle grips the road really well and the suspension deals with rough roads admirably.

The Fiat Fiorino is a comfortable car to drive, even for tall drivers, as there is plenty of space in the cabin. However, the cabin itself is rather basic though the driver’s seat provides plenty of support.

There’s also lumbar adjustment in the driver’s seat which is also height adjustable and the steering wheel is also adjustable to help find the most comfortable seating position.

Other models include electric windows, remote central locking while others get roof bars, electronic stability control and bigger wheels.

This was the top model but Fiat have added the Fiorino Sportivo which comes with alloy wheels and the 95bhp engine. There’s also parking sensors and Bluetooth connectivity to help make it one of the best value vans in the segment.

Get a Quote on a Fiat Fiorino 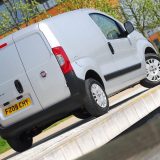