Ford Fiesta Van is the king

The best-selling small car-derived van in the UK is the Ford Fiesta Van with buyers queuing up to enjoy the stylish good looks and great performance.

Based on the bestselling Ford Fiesta, the chassis lends itself to dynamic performance and the excellent range of engines helps to propel this to the top of the bestseller list.

One of the biggest attractions is that all of the diesel variants now have CO2 emissions of less than 100g/km which is a huge plus for companies keen to polish their green credentials.

And with an average economy figure of 76mpg there’s a lot going for the Ford Fiesta Van.

In addition, the firm has also introduced a system which encourages safer driving and is aimed at limiting the time a driver spends behind the wheel.

On top of this, Ford has also added its emergency assistance system which will connect the driver to the emergency services when there has been an accident.

The overall package of the Ford Fiesta Van is excellent which will help to underline its dominant position as the bestselling small van for years to come.

Undoubtedly, for anyone needing a small van to work hard in towns and cities then the Ford Fiesta Van makes the perfect choice with its low running costs and excellent levels of performance.

However, loading is an issue which will restrict what the van can be used for but it would be an excellent choice for anyone with multi-drop runs involving small packages, for instance. Access to the back of the loading space is also difficult because it means having to lean in – though, unlike many rivals, the door lifts quite high so the person doing the unloading will not be hitting their head on the door.

Alongside its rivals, the Ford Fiesta Van is best for performance, handling and economy and its load space is of a similar size so many people may decide it’s the better looking option too.

If you like the Ford Fiesta Van, then have a look at the Vauxhall Corsavan, the Peugeot Bipper or the Fiat Punto Van.

There’s no doubt that the Ford Fiesta Van is a cheap van to run thanks to its excellent range of engines.

For instance, the Econetic version of the firm’s 1.5litre Duratorq TDCi will return an incredible 86mpg while having CO2 emissions of just 87g/km. This is the best figure of any small van on the market.

Perhaps the only drawback to the running costs, is that the Ford Fiesta Van has service intervals of 12,500 miles or 12 months, which is among the shortest of any of its rivals, but it does have a very low insurance group rating to ensure it is cheap to insure.

Despite its size, the Ford Fiesta Van has a one cubic metre of load space but like most car-derived vans the rear sill is still in place which makes it difficult to load heavy items which means the van is probably best suited to a light load, for example small parcels.

The gross payload is 508kg and there are four hooks in the load space for holding the cargo along with a rubber format which is designed to take a lot of punishment.

The sidewalls aren’t flat but the load space should take large box items if necessary.

The Ford Fiesta Van is a bestseller for many reasons but its safety credentials cannot be disputed.

Not only has the Blue Oval added its emergency assistance system which will call emergency services should the van be involved in an accident but it’s also brought in its Mykey service which not only limits the time a driver spends behind wheel but also encourages safer driving. (It also provides information for the fleet manager).

On top of this there is also active city stop which is a collision avoidance system along with hill start assist, rear view camera and Easy Fuel – which is Ford’s way of preventing the wrong fuel being added.

Electronic stability control is not standard across the range but passenger and driver airbags are and the Ford Fiesta Van has a steel bulkhead fitted as standard.

The Ford Fiesta is renowned for being a fun car to drive with agility and dynamic performance and these elements have been passed across to the van version.

The ride and handling are second to none and there’s an impressive level of comfort to enjoy the advanced performance in.

The diesel engines are excellent and while the 1.25 litre petrol variant is a decent performer around town it’s not the best performer on motorways at speed, particularly with a full load.

Opt for the Ford Fiesta Van Sport trim and owners will find that the suspension has been lowered which will make the response sharper and improve handling.

Whichever model is chosen, the Fiesta is like its car sibling and is a great performer on winding country roads, it’s stable in corners and it’s at home in the urban environment too in busy traffic.

Because it’s based on the Ford Fiesta, it has a very similar cabin which means that the controls are well-designed and close to hand and the overall layout is needed.

Get a Quote on a Ford Fiesta Van 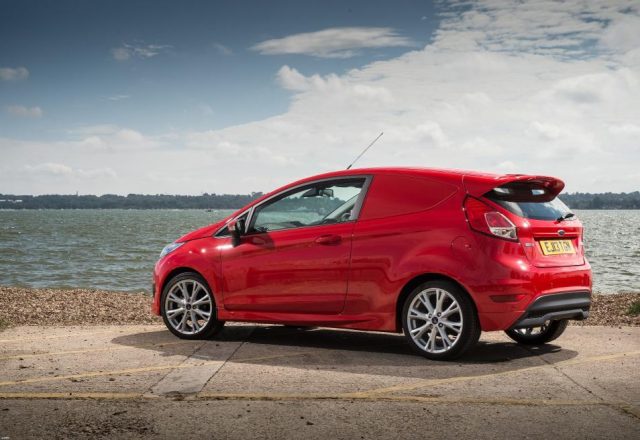 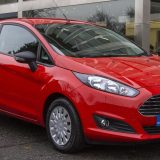