Ford Ranger is a practical choice

The sheer range of models in the Ford Ranger line-up impresses and there’s something for everyone from double and single cabs as well as the option of two- or four-wheel drive.

The Ranger is a practical pick-up that has been priced to make an impact on the market and it’s a vehicle that’s safe and comfortable to drive.

It’s safe because of the safety kit that’s fitted and comfortable because this pick-up has comfy seats and a nice driver’s position. In some models the electrically driver’s seat helps to make finding just the right spot a breeze!

However, the ride itself isn’t that comfortable, mainly down to the state of the UK’s roads and many rivals are better in this department. Indeed, the refinement levels are better too in other marques but the Ranger has a lot to offer.

The Ford Ranger is also not that cheap to run and its warranty is lacking but most of those who need a pick-up for business will find a vehicle that’s a good performer and a great family car at weekends.

First impressions of the Ford Ranger is that it’s a pick-up that has been created for the lifestyle market but there’s no doubt that it’s also suitable for many firms looking for a decent workhorse.

There’s a wide range of trim and spec levels and the standard equipment is very good, particularly for safety systems and driver aids.

The Ford Ranger is also very pleasant place to be in on long journeys; the cab is comfortable and spacious but its economy lets it down.

Also, the Ranger does bounce on rough roads but the steering is accurate and responsive. The 4×4 versions are very good off-road and the pick-up is undoubtedly a good performer when off the tarmac.

Owners will get used to the noise of the engine as the van accelerates and, surprisingly, the pick-up is quiet at speed when cruising. The popular choice of fitting an automatic seven speed gearbox also pays dividends to help improve the Ranger’s appeal.

As for reasons to buy? It’s a tricky one since the Ford Ranger won’t be at the top of many shopping lists which is a shame because the positives outweigh the negatives and the Ranger has a lot going for it – especially when it comes to performance and comfort levels.

If you like the Ford Ranger, then have a look at the Mitsubishi L200, the VW Amarok and the Isuzu D-Max.

All of the engines are strong performers and help deliver an enjoyable performance but their economy figures aren’t the best in class. Owners should expect around 38mpg with CO2 emissions of 192g/km for the lower powered diesel engine in the single cab model and for the 150bhp engine coupled to the double cab Ranger, economy will drop to 36mpg. It falls even further in the automatic gearbox to 30mpg.

Figures for the 3.2 litre diesel are 29mpg with a manual gearbox and 28mpg for the automatic transmission.

Ford only offers its Ranger with a three years or 60,000 miles warranty, which doesn’t compare very well with many of its rivals, and service intervals for the van are set at one year or 20,000 miles.

The Ford Ranger comes in a wide range of models with the single cab versions of the van having a maximum load length of 2,317mm. In the double cab version this drops to 1,549mm and the load bed measures 1,520mm.

One of the strengths for the Ranger is the range of payloads it is capable of carrying from 1,340kg in the single cab 4×4 model to 1,104kg for the double cab versions.

The Ford Ranger van also scores on its towing capabilities and every model can tow a 3.5tonne trailer.

All Ford Rangers come with electronic stability control, traction control as well as hill start assist to prevent the van from rolling before pulling away (also a big boon when fully loaded).

There’s also hill descent control with a rollover mitigation system with both tools controlling off-road speeds and preventing the vehicle from rolling over. There’s also a trailer control to stop it weaving out of control.

There are also airbags for the driver and front passenger as well as side curtain and side impact airbags as well as a driver’s knee airbag.

However, the Ford Ranger is also one of the few commercial vehicles that have managed to score five stars under the Euro NCAP crash testing.

The Ford Ranger is a comfortable car to drive and its suspension deals with the worst roads and even when unladen there’s little in the way of bounce and body roll on corners.

Many buyers are also opting for the automatic transmission which has seven speeds and which offers smooth gear changes and very little drop in the van’s performance.

The Ford Ranger also tows more than its rivals (particularly the VW Amarok) with a 3.5tonne towing capacity and owners should be aware that in real world use, especially those with double-cab models, they are unlikely to achieve more than 30mpg.

However, the Ranger also has a really good electronic drive selection to switch between two or four-wheel-drive while on the move.

Even the basic level of the Ford Ranger is very well equipped with heated mirrors and windows, courtesy lights that dim and two 12V power points in the cabin which prove useful.

The Limited trim for the Ford Ranger is more for those wanting a pick-up for ‘lifestyle’ reasons (but may well suit many business users!) and includes things like a centre console coolbox, privacy glass, 17 inch alloy wheels, dual zone climate control, electrically adjustable driver’s seat, rear parking sensors and door mirrors that have puddle lights at night.

And while there’s plenty of standard equipment, Ford has also added an extensive options list for owners.

Get a Quote on a Ford Ranger 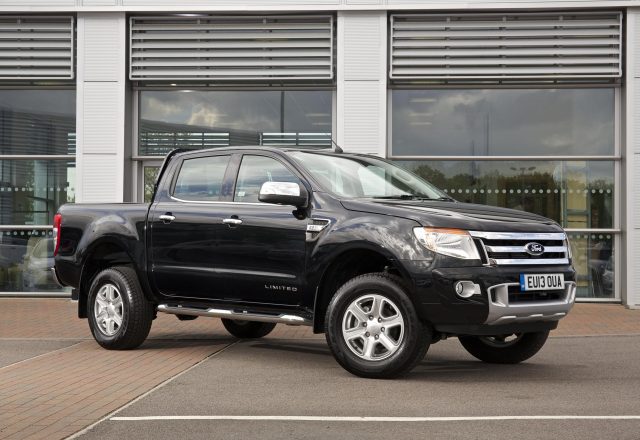