Despite their best efforts, the Ford Tourneo Custom is undoubtedly a van but the conversion into a top-class people mover is impressive. There are two versions available, there’s the Zetec and Titanium and both have a lot to recommend them. Indeed both are great to drive – this is mainly down to the firm meeting the needs of family MPV buyers who want to enjoy lots of space but with car-like handling and manoeuvrability. Ford says that the ability of these people carriers with six separate rear seat means they can be arranged individually – and it is the only van-based carrier to do so. The new model has delivered an improved cabin and while the build quality has been improved, there’s no doubt that Ford is pitching its vehicle as an upmarket challenger to the likes of the Mercedes Vito – for the money is definitely worth considering.

For those firms, and indeed families, who are in the market to buy a nine seater that offers value for money and great handling as well agility, then the Ford Tourneo Custom is for you. There’s plenty of space on board, even with every seat in place the luggage space is 1,323 litres. The seats are easy to move as well as so the Tourneo Custom offers practicality for those who are looking for this and the ability to move nine people easily. Also, for those who are tempted by the VW Caravelle, need to appreciate that the Ford Tourneo Custom is not only cheaper to buy but cheaper to run as well; the fuel economy a slightly better and the handling has the edge. The 2018 model year for the Ford Tourneo Custom sees various styling tweaks and the addition of daytime running lights along with an improved air con system and better build quality.

The interior is completely new and offers a premium and improved refinement. Ford says the Tourneo Custom is aimed at the executive shuttle market as well as for lifestyle customers and will be available from early 2018. The revamp also saw a completely new front end being designed and better quality trim materials being used. Also the noise levels have been reduced and comfort levels boosted.

If you like the Ford Tourneo Custom then consider the Volkswagen Caravelle and the Renault Trafic SpaceClass.

The Ford Tourneo Custom is powered by a new 2.0 litre EcoBlue diesel engine which replaces the noisy 2.2 litre diesel unit. The engine produces a choice of 150 PS, 130 PS and 170 PS. Ford says fuel efficiency has been improved by 13% and torque performance by 20%. Emissions for the new engine are 162g/km and the engines are coupled to either a six speed manual box or Ford’s six speed SelectShift automatic transmission. There’s no doubt that this is a big vehicle and when fully loaded owners will see economy of around 30 mpg though with the Econetic tweaks this can be increased slightly thanks to a speed limiter and stop-start.

The one thing that the Ford Tourneo Custom has plenty of is load space. With all nine seats in place, owners will find they have 1,323 litres of luggage space available and with the rear seats removed, which is done is easily, the load space is 5,520 litres – with the second and third row of seats removed, owners have a huge 6,000 litres available. The suspension will carry up to 859 kg. The Tourneo Custom offers flexibility for those firms who need it.

One of the most impressive aspects for the Ford Tourneo Custom is the fact that this is not only a great vehicle to drive but it’s a comfortable one for the driver as well. The driver’s seat is heated and there is cruise control and a DAB radio. The interior is made with robust materials to withstand lots of use. Other features include a power socket on the floor in the cabin, plenty of storage areas and plenty of power from the engine so it’s a good performer around town and particularly comfortable for long motorway journeys.

The gearing and the steering are set up to deliver a surprisingly agile experience and there’s good grip when cornering with no unexpected body roll at speed. The driver’s seat is also high which gives a good view of the road ahead and all of the Tourneo Custom’s controls were within easy reach. 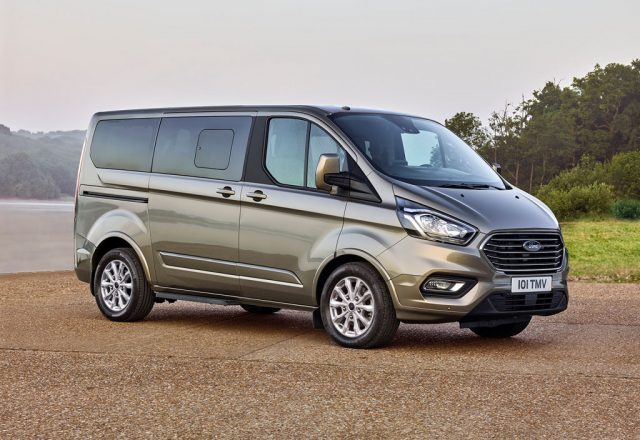 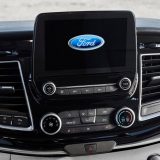 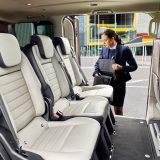 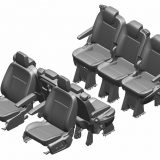