There’s no doubt that Ford has high hopes for its new Transit which is the stalwart of the UK’s panel van fleet.

The Transit has been the country’s leading van since 1965 with around 2.2 million of them being sold and, incredibly, there is still 700,000 on the road.

Just to underline the dominance and popularity of the Ford Transit, one in every four vans in the UK is a Transit.

Indeed, the Transit is the firm’s third bestselling vehicle, so it’s a vital tool in the Ford cabinet.

Reasons to buy the Ford Transit

The all-new Ford Transit is an excellent vehicle for anyone wanting a reliable and cheap van to run and because the range is so vast it offers something for everyone. With its build quality and renowned reliability, the Transit looks like it will be dominating the UK panel van scene for years to come.

The Transit makes perfect sense for a fleet operator because the running costs have been substantially reduced.

However, others offer more space (especially the VW Crafter) and it does give the latest version of the Mercedes Sprinter a run for its money – in many ways the new Transit edges the competition but the Sprinter offers a better ride.

Overall, we would give the new Ford Transit five out five stars because it is an excellent offering and though it doesn’t haven’t the largest payload area it does have character, style, kit and performance. That’s not a bad combination in a fiercely-fought sector.

If the Ford Transit is not for you then have a look at the Vauxhall Movano, the Mercedes Benz Sprinter or the VW Crafter.

Anyone interested in the Ford Transit will find the range has been extended and there’s now the Transit Courier, the Connect which is a compact van and the mid-sized Custom van.

Few manufacturers can ever hope to compete with the sheer scale of the Ford Transit offering; there are more than 400 variants stretching from minibuses to panel vans, so in among that lot is a van designed for everyone.

Not only has Ford cut the time it takes to carry out a regular maintenance check, but the service intervals are now at 30,000 miles or two years which will undoubtedly be popular for anyone owning one.

Vans are not the cheapest vehicles to run economy-wise but the Ford Transit as had a few tweaks to make things easier on the wallet. Most of the engines are now more economical with the ECOnetic versions of the 2.2 litre Duratorq diesel returning around 44 mpg with CO2 emissions of 169g/km.

And because this is a ‘world’ vehicle – 118 countries will sell the same versions including North America – means that the maintenance times have also been substantially cut. This means repair bills be lower – for instance the rear brakes replacement time has been halved.

Ford is insistent that the new Transit is much better than what has been produced before.

That’s because Ford has had to up its game now that the likes of the Citroen Relay, the Mercedes Sprinter and even the Vauxhall Morvana are nipping at its heels.

To meet the competition, the all new Ford Transit is bigger and will carry around 10% more payload than before, it’s also easier to drive and has a new technology added to it.

And because the range is so large, there is a load space to suit every need. With a choice of drop side trucks, chassis vans, panel vans and minibuses, the Ford Transit will come in Gross Vehicle Weights ranging from 2.9 tonnes to 4.7 tonnes.

The load volume ranges from 15.1 cubic metres, which isn’t quite as spacious as some rivals, and smallest volume in the range is 9.6 cubic metres.

It’s interesting too that Ford have introduced things like plastic load floor covers which will take a lot of punishment and which extend along part of the van wall as well as LED lighting.

Entry to the load space is easy, as you would expect from a Transit, since the doors open wide and can be opened fully to 180 degrees to make loading even easier.

Designers have been at work on the Ford Transit and have introduced all-round body protection, higher mounted lights and a multi piece rear bumper which have been designed to minimise any damage and reduce the amount of repair costs.

Ford has also added its electronic stability control system to the Transit and there are a variety of options including a curve control technology which will see individual wheels being braked to help keep the vehicle under control should a corner be taken too quickly.

There’s also a trailer sway control if a trailer is being towed to help keep it under control too and Ford have also brought in ‘load adaptive roll stability control’ which will help keep the van under control should a heavy payload destabilise the van.

Owners should be reassured too that among the many tests carried out by Ford was one that saw the Transit hit a kerb at 30mph – and handle it well.

The Ford Transit has been extensively tested in real-world conditions by actual customers and, in addition, hundreds of thousands of miles have been driven in a rigorous programme of testing to ensure that this all-new Transit is as good as it can be. It should certainly be reliable.

The result is a choice of just the one 2.2 litre Duratorq diesel engine with three power outputs; all of which deliver decent levels of torque.

Be aware though that the ECOnetic model has its speed limited to 62mph.

Of the engines, the most suitable for everyday needs would probably be the 123hp output though with particularly heavy loads, the engine will need to be revved quite hard to get any performance.

Also, the turning circle is a fairly tight 11.9metres which is aided with an electrically assisted rack and pinion set-up with good visibility from the driver’s seat.

It goes without saying that the Transit is not going to set any speed records but there is enough torque in the engines to help propel the vehicle to a reasonable performance – and the curve control is a useful addition should the driver go too quickly into a motorway slip-road, for instance. 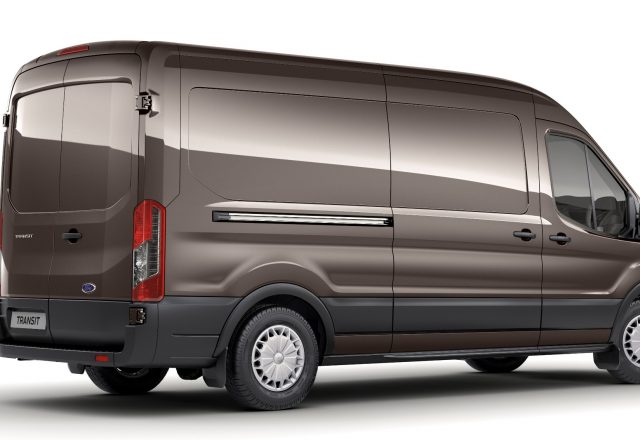