The award-winning Ford Transit Connect is a much better product that the van it replaced and reflects the amount of time and effort Ford put in for analysing what owners in this segment really wanted.

The result is a practical and reliable van that is not only tough but which has lots of load space and cargo that offer best in class.

Based on the firm’s C-Max platform, the Connect offers a car-like ride and the suspension deals with potholes and rough roads easily.

Handling is very good, there’s plenty of grip and there’s no body roll on corners.

All of the engines are cheap to run, even the 1.0litre eco-boost is a decent performer around towns though its steering is lighter than others.

Most buyers will opt for the 1.6 litre diesel engine with the 95PS output because it offers the best in economy and refinement terms. It’s a great performer on winding country roads and on the motorways for long journeys. It also has excellent levels of torque.

The Connect is also available either as a van, Kombi or double-cab-in-cab-van and it’s a very quiet vehicle in any guise.

The Ford Transit Connect has wowed award panels and customers alike with the quality of its offering.

This is an unbeatable van that deserves to do well. It’s also well-built and there are some really clever design ideas on board to make the owner’s life as easy as possible.

Throw in the impressive economy – the class-leading figures for the Econetic engine – and the Ford Transit Connect is hard to beat.

It’s also important to remember too that the all-new Transit Connect is nothing like the van it replaced which was showing its age and was outsmarted by most of its rivals.

However, now the tables have been turned and it’s the Connect that is impressing and setting the standard which means that the owners have a van they can rely on for several years to come.

The Connect is a polished product that offers a lot for the money and it should be a long serving workhorse that really does deliver on many levels.

If you like the Ford Transit Connect, then have a look at the Vauxhall Combo, the VW Caddy or the Mercedes Citan.

There’s a good range of diesel and petrol engines available for the Ford Transit Connect which use either five or six speed manual gearboxes but they also have lots of torque to help shift a heavy load.

More impressively, the Connect also offers incredible fuel efficiency for this sector and owners can get fuel economy of 71 mpg with CO2 emissions of 105g/km in the Econetic engine. Few rivals can match that kind of performance though this frugal engine has a speed limiter (set at 62mph).

In addition, the van is designed to be more aerodynamic for fuel efficiency and the component parts have been designed for easy servicing and cheap replacement to help lower running costs.

Service intervals have been set at 20,000 miles or one year.

Despite its size, the Ford Transit Connect offers an impressive 2.9 cubic metres of load space in the short wheelbase version and 3.6 cubic metres in the long wheelbase.

The Connect can also carry up to 1,000kg of cargo.

Like many other van makers, the Ford Transit Connect has a bulkhead with a flap to allow long loads such as ladders up to 3metres long in a short wheelbase and 3.4metres long in the long wheelbase to be stowed safely.

The front passenger seat can also be folded flat if needed and the sliding door in the long wheelbase version is wide enough for a Europallet to be loaded.

Ford has fitted electronic stability control as standard along with traction control to help prevent the van from spinning out of control. There’s also a useful load adaptive control which will automatically adjust ESC to take into account the payload in the van before implementing any safety measures.

A full bulkhead is fitted as standard with a choice of either glazed or unglazed units and there’s also hill start assist which is a big help when the Connect is fully loaded and on a hill.

Ford is also offering its Active City Stop as an option which will brake the van automatically when it detects an imminent collision.

The Ford Transit Connect also comes with tyre pressure monitoring and a system that monitors a towed trailer and helps to keep it under control, if the towbar is factory fitted.

The designers of the Ford Transit Connect have paid a lot of attention to the safety and durability of the vehicle and have carried out extensive testing – and it shows.

The van is very comfortable to drive over long distances and it is ideal for those who spend a lot of time behind the wheel with everything well designed and switches are close to hand.

And because of its size, the Ford Transit Connect has car-like abilities and comfort levels which make it an ideal choice for use in towns.

Ford have also provided it’s excellent 1.0litre EcoBoost engine for the line-up which is a great performer around town, even with a full load.

The steering is light and the chassis and suspension help provide a stable and rewarding drive. The van handles better than most of its rivals and its good on corners without body roll and it’s a strong performer on motorways.

Alongside the firm’s three cylinder EcoBoost unit is the impressive Ford 1.6litre Duratorq TDCi unit which has four power outputs. All of them are very good for daily use and high mileage users.

Both the petrol and diesel units offer plenty of torque which makes moving a full load at low speeds a breeze.

The Ford Transit Connect comes with a dual passenger seats which means three people can be carried comfortably (on short trips at least) while the Kombi version will allow seven people to get on board.

The standard list of kit is quite impressive and includes Ford’s SYNC system which uses Bluetooth connectivity for its infotainment system. It can even read out incoming text messages.

More importantly, it will automatically call the emergency services in an accident.

The Connect also has rear parking sensors and rearview camera and lights that come on automatically at dusk.

There’s also an impressive trick that when the indicators are turned on at night, the fog lights on the turning side come on to illuminate the road into the turn.

Get a Quote on a Ford Transit Connect 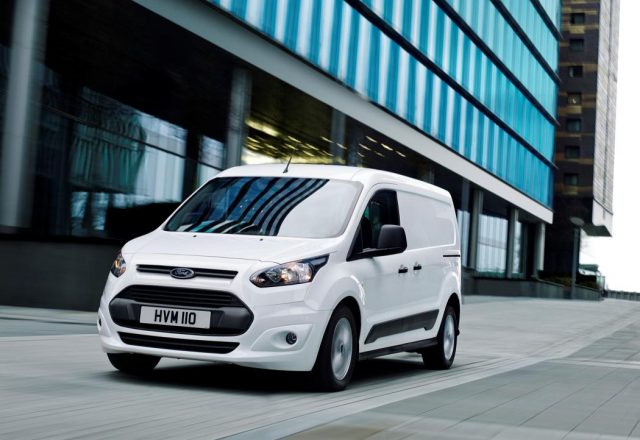 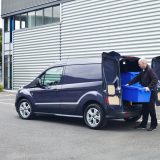 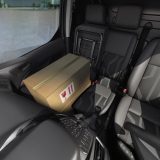 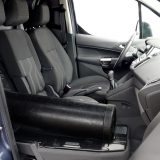 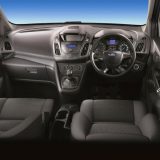