Isuzu D-Max is a legend for a reason

In the keenly fought pick-up market, the Isuzu D-Max has managed to achieve legendary status for a wide range of reasons. The second generation is available as a double or single cab or extended cab which offers plenty space. There’s also good on- and off-road performance and the D-Max will deliver what most owners are looking for. However, for those looking for a ‘lifestyle pick-up’ or a work vehicle that is comfortable and refined, then the Isuzu D-Max’s failings will become apparent. The firm tried to address these in 2016 with a makeover and while many issues were dealt with the D-Max still falls behind most of its competitors for refinement – particularly the VW Amarok and the Ford Ranger. Despite this, the D-Max is still one of the best pick-ups for off-roading or for use on work sites with slippery surfaces and its reputation for offering plenty of grip and great performance when towing heavy loads over rough ground is well-earned and still valid today.

The Isuzu D-Max underwent a revamp in 2016 with some impressive additions and upgrades; among the special editions were better tyres and suspension to boost its off-road performance. There were also changes to the cab with the basic Utility model offering hard wearing surfaces and some equipment but great workhorse potential while the other models were improved with more equipment and better seats to help meet growing demand for ‘lifestyle pick-ups’. The D-Max’s extended cab is also one of the best for those who need easy access and for getting in and out of the cabin easily. Isuzu offers the range with three body styles and five specifications along with special editions aimed at various audiences, particularly younger buyers and those who want the D-Max as their family vehicle.

If you like the Isuzu D-Max then take a look at the Ford Ranger, Volkswagen Amarok and the Toyota Hilux.

While the Isuzu D-Max has the choice of just one 2.5 litre twin turbocharged diesel engine, it does offer reasonable economy. Opt for the manual six-speed gearbox and it should return 39 mpg with emissions of 194g/km. In the five-speed automatic gearbox version, the engine will return 34 mpg while emissions increase to 220g/km. If economy is a major factor in the choice of a new pickup, then some rivals offer better figures, particularly the Nissan Navara. It should also be appreciated that some of the special editions have equipment, such as larger tyres, which will be expensive to replace.

However, one of the most attractive reasons for taking on the Isuzu D-Max is the excellent five years or 125,000 miles’ warranty being offered which is better than most of its rivals. The service intervals are every two years or 12,000 miles.

The Isuzu D-Max has a decent range of combinations from single and double cabs to extended cabs – all offer lots of comfort. For those opting for the single cab, the load bay will carry a payload of 1,128 kg with the load bed measuring 2,300 mm x 1,570 mm. The extended cab will carry 1,085 kg with a smaller load bed. The D-Max also has a choice of all-wheel drive or 4×2 with the former offering a towing weight of 3,500 kg while the two-wheel drive model will tow 2,500 kg. There’s also the option of a load bed extender for longer loads.

To compete effectively in the market, the Isuzu D-Max comes with a wide range of technology and safety features. Among them is electronic stability and traction control and ABS brakes. Even the basic model, the Utility, has plenty of airbags while the all-wheel drive versions have the option of selecting 4×4 while on the move to boost security should the road surface become slippery.

Under the bonnet, the Isuzu D-Max has just one 2.5 litre twin turbocharged diesel engine available which produces 163 bhp and torque of 400Nm – which makes it a great choice for those who need to tow up to 3,500 kg. The engine is coupled to either a five-speed automatic transmission or a six-speed manual box, both are good performers. Out on the road, the D-Max offers a comfortable driving experience but doesn’t compare as favourably with most of its newer arrivals. Having said that it is a better choice for those wanting a workhorse and the D-Max is still one of the toughest pick-ups available that can take plenty of punishment.

Another reason for opting for the Isuzu D-Max is for the range of hard top backs and load covers which include those designed for use with the double cab and extended cab models. There’s also a tow bar with electrics available plus cargo rails and roof bars. The basic model has a decent list of basic kit including electric front windows and air conditioning. The interior is rather basic though the materials are hard wearing and easy to clean which makes the Utility model a sound choice for businesses. Other models in the range come with manual air conditioning, Bluetooth connectivity, reading lights while the top models come with an upgraded audio system as well as a touchscreen infotainment and satnav system. 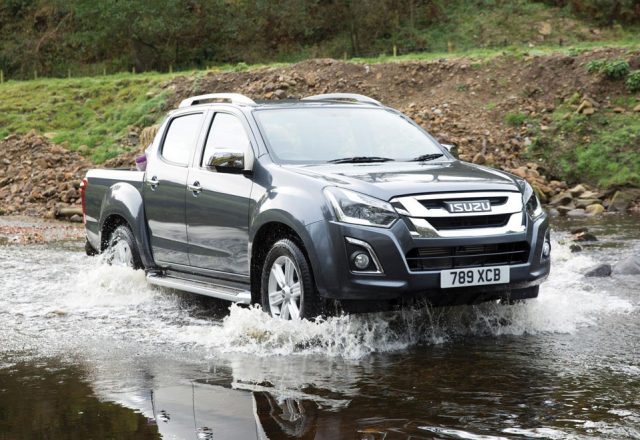 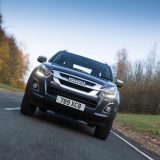 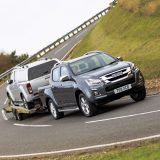 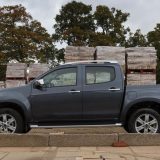 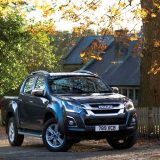 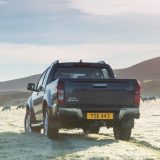