The latest 2014 version of the Iveco Daily is an all-round impressive van which is designed to counter the increasingly exciting offerings from the likes of Ford and Renault.

The redesign has seen 80% of the parts being brand new and there’s no doubt that the robust design and its class-leading carrying ability makes it a popular choice among UK buyers.

The engines are resilient and well made though they aren’t as frugal as the latest offerings from its rivals and the small dealer network will be a cause of concern for some. The dealers are, however, dedicated to business users which is also an important consideration in an age when a van needs to be out working every day.

Iveco is better known for its trucks but they have carried over their knowledge and expertise into creating the impressive Daily.

Indeed, the firm genuinely sees the Daily as a small truck rather than a van and with its impressive cargo carrying qualities, you can see why.

The Iveco Daily is different from its competitors with a rugged ladder-frame chassis which helps make it a popular choice among buyers – it’s also a popular base for conversion specialists who appreciate the robust charms the van has to offer.

With a variety of roof heights and van lengths, the Iveco Daily is available in a variety of guises including chassis cabs, crew cabs and panel vans. It also comes as a minibus and camper van guises.

The Iveco Daily has been something of a global success for the firm, they have sold more than 2.6 million vehicles around the world, in 110 countries, and there’s nothing to suggest that this new van will not be just as successful.

For load carrying abilities and robust designs, there’s little on the market to match it.

If you like the Iveco Daily, then have a look at the Ford Transit, the VW Crafter or the Mercedes Sprinter.

Under the bonnet is a choice of a 2.3litre of 3.0litre diesel unit that have nine power output options from 105bhp to 202bhp.

The engines are shared with the Fiat Ducato and owners can also opt for a gas-powered version too which has decent performance and should be cheaper to run.

Though despite the strength of the diesel engines and the various eco additions such as start-stop and a smart alternator to capture kinetic energy, the Iveco Daily lags behind its rivals with economy of around 34mpg on the combined cycle. That compares with the 40mpg average from many competitors have as a standard.

Owners can opt for an eco pack to help boost fuel economy by a few mpg but many rivals still perform better.

However the latest Iveco Daily is still more fuel efficient than the previous model and its rugged design will help keep repair costs down.

Owners looking for the largest load space available in a van today will look no further than the Iveco Daily which has up to 19.6 cubic metres available.

The space starts at 7.3 cubic metres and with three roof heights and five van lengths; there’s a load space for every need.

In addition the Iveco Daily has a class-leading gross vehicle weight ranging from 2.3tonnes up to 7tonnes and a payload of up to 4,700kg. The van also has a towing capacity of 3,500kg.

There’s no doubt that the Daily is one of the best load-luggers on the market today and few rivals can match its offering in this department. The option of having air suspension is also a boon since owners can lower the van for easier loading.

There’s enough space on board for a Europallet which also fits in via the side door as well as the rear ones.

And while there’s a bewildering list of versions available, around 8,000, Iveco says most buyers will opt for its Daily with 10.8 cubic metres of load space because it offers the best space and efficiency.

Safety equipment has been enhanced for the new Iveco Daily with electronic stability control fitted as standard as are seatbelt pretensioners.

The engines for the Iveco Daily are good performers both at speed on motorways and on winding country roads.

The suspension has been improved, it’s now a Quad-Leaf double wishbone set-up, which helps to deliver a sharper and more comfortable ride. It’s certainly more comfortable than the previous model.

The suspension also helps to control body roll on tight corners and at speed the Iveco Daily is a stable and comfortable van to drive.

There’s an excellent turning circle for the van which makes it a good vehicle for towns and cities and it’s a good performer at low speeds.

Obviously, the lower powered engines can strain with a full load but the 3.0litre unit with 202bhp is excellent and it barely breaks sweat with a full load travelling at speed. The torque levels are also very good for all of the units.

Previously, the Iveco Daily had a rear overhang but this is been shortened for the new model which does improve handling and ride quality.

In recent times all van manufacturers have been praising their car-like design for the interior and Iveco is doing the same for its Daily.

So while it looks less like a truck in the cabin it’s not quite the car-like comfort levels that are seen in vans such as the Ford Transit or the Mercedes Sprinter. The materials used are durable and designed to be punished though some of the trim levels are found to be wanting.

There’s lots storage space inside the cabin, the controls are within easy reach and the touchscreen satnav is one of the best around. The dashboard itself is a completely new design.

Get a Quote on a Iveco Daily 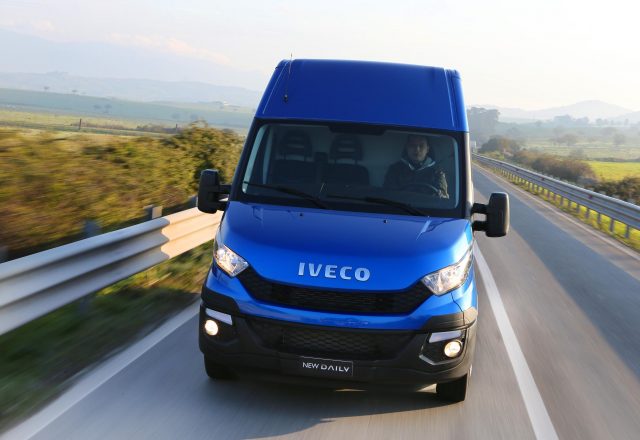