Mercedes Sprinter is still the van to beat

When Mercedes announced its ‘new’ Sprinter many in the industry were expecting more from the company because the van was the best available but the revamp only added to its prestige.

Essentially the Mercedes Sprinter underwent a facelift but in the process it became a much more comfortable ride, fuel economy was improved as was the drive itself.

There’s no doubt that the sprinter is the best van for driving lots of motorway miles and it’s also a quieter vehicle too with improved sound insulation. The engines are also more economical and the handling has been improved because the chassis has been lowered.

With nine body styles to choose from, there is a Mercedes Sprinter to suit just about every job.

With its excellent build quality and handling abilities, the Sprinter is an all-round impressive package that never fails to impress. In addition, the safety equipment alone makes this vehicle a great investment for any business.

Above all though, this is one of the most comfortable vans to drive over long distances; from its comfortable seats to excellent handling, the Mercedes Sprinter is an assured performer that will take a lot of punishment from demanding owners.

Perhaps the Sprinter’s biggest attraction is the badge; for many business owners the Sprinter will represent professionalism and its reliability also makes it a popular choice.

If you like the Mercedes Sprinter, then have a look at the VW Crafter and the Ford Transit.

Apart from being very reliable, the Mercedes Sprinter is also cheap to run and its service intervals have been increased to 37,000 miles.

The new engines also mean that the sprinter should return around 44 mpg and it’s a real world equivalent should be something close to that, especially with those vehicles fitted with BlueEfficiency fuel saving additions.

In addition, now that the Sprinter has had its chassis lowered, the van’s economy has also improved and there’s now a change gear indicator to help the van improve its economy.

Mercedes barely altered the load space in the revamp and it will take a maximum load that is 4.7 metres long and 2.14 metres high. This means the van can carry up to 17 cubic metres of cargo and its payload maximum ranges from 734kg up to 2,515 kg.

A sliding door is fitted as standard and dual doors are available as an option as is electric opening and closing.

The rear doors will open to 180° though there’s an option to have them open fully to lock onto the side of the van.

The Mercedes Sprinter also comes with a range of bulkhead options including sliding door and a glazed panels.

There are nine body styles sitting on three wheelbases along with a choice of four body lengths and three roof heights. This combination means that many potential uses are available to owners.

With this being a Mercedes, the Sprinter has some impressive safety equipment fitted and the facelift brought in five new systems too. Among them is the cross wind assistance system, fitted as standard to the vehicle, which will help the vehicle to brake and prevent it from running out of control. It’s an incredible and useful idea that works.

It should also be noted that rear wheel drive is fitted as standard which sometimes makes for an interesting drive in very wet conditions though Mercedes has also fitted its electronic stability system to help keep the van under control.

There’s also brake assist and electronic trailer stabilisation fitted as standard and a useful acceleration skid control too. Other safety kit includes tyre pressure monitoring and automatic hazard lights that come on in the event of hard braking.

Don’t make the mistake of thinking that the lowest powered engine is feeble because it is surprisingly nippy though the choice of them all would be the 130 PS which has great performance and is frugal to run.

Mercedes have also added the option of their BlueEfficiency models which improve fuel economy by using things like start/stop and reduced rolling resistance tyres. Fuel economy should be 44mpg and CO2 emissions will be 165g/km.

In addition to the van being revamped, the engines were also tweaked to be more frugal and quieter. Coupled to the excellent six speed manual gearbox, the Mercedes Sprinter offers great performance and handling abilities.

There’s also a very good 7G-Tronic automatic gearbox available too which is quite impressive when driving around town with a full load.

For many people, the Mercedes Sprinter is the best handling van available and in its latest incarnation, the firm lowered the chassis to help improve handling. It’s also made the van easier to load and unload and the improved handling is noticeable on corners, especially with a full load.

It’s not good enough to have a van that handles really well and looks stylish, it must also be impressive in the cabin and this is where the Mercedes Sprinter really does make its mark.

The seats are not only comfortable, they’ve been redesigned to be more supportive, but they are also easily adjusted for rake to find the perfect position. The material now used to cover the seats is harder wearing.

Even the base model has a good list of standard kit including Bluetooth connectivity and the firm’s Becker Map Pilot satnav system.

Indeed, the cabin is well laid out and a comfortable place to be; as one would expect for a vehicle designed for long motorway journeys.

Get a Quote on a Mercedes Sprinter 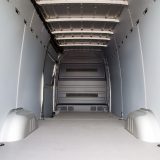