For many van owners, the Mercedes Vito will tick so many boxes: it’s cheap to run, it’s a great van to drive and it makes a great first impression for any business.

Everything about this van oozes class – from the design and solid build to the premium-like cabin. This is a great product from a van maker that knows what it is doing.

It’s also the only van in the 1 tonne segment that has rear wheel drive and that will undoubtedly put people off.

However, everything else about the Vito is good but it’s for its driving experience and the fact it’s a comfortable vehicle to drive on long journeys which will help to make this a good choice for many owners.

The Mercedes Vito has been a popular van for many years now and its revamp in 2011 helped to maintain its position though more recently launched rivals are giving it a run for the money.

However, it’s for the badge at the front that will be the biggest attraction for buying the Mercedes Vito as it projects an image that will impress clients.

The van itself is built to the high standards, it really is a solid production, and powered by some excellent engines, it offers decent economy and performance.

Another major reason for opting to buy the Vito is that it is sold through the firm’s truck division which means that servicing can be carried out 24/7 if necessary to help keep the van on the road.

Essentially, the Mercedes Vito is a polished product designed to deliver in a market this van-maker knows and understands well. Few can compete effectively with it but some may decide cheaper rivals offer more.

If you like the Mercedes Vito then have a look at the Vauxhall Vivaro, the Citroen Dispatch or the Ford Transit Custom.

There’s an excellent 2.2 litre four-cylinder diesel engine on offer with three power outputs along with a 3.0 litre V6 unit. They are all coupled to either a six speed manual or automatic gearbox.

All of the engines can be specified as the firm’s BlueEFFICIENCY variants to help improve economy and for most owners this would be a worthwhile investment.

It may not sound a lot but the BlueEFFICIENCY Vito is around 2mpg more economical than the standard van which means that the models using the 2.2litre engine should return around 38mpg – 40mpg. The 3.0litre version is also capable of 34 mpg. These are savings that will add up over the course of ownership.

Another big attraction for using the Mercedes Vito is that the van doesn’t have set service intervals, instead the vehicle calculates when it needs to be serviced according to how it has been driven.

The Mercedes Vito comes in three lengths, Compact, Long and Extra Long, and there’s also the option of a high roof.

Access to the load space is easy thanks to the large rear doors, though a tailgate can be an option. There’s also a sliding door to help access too.

Among the packages offered by Mercedes is a ‘Cargo’ option which includes tie down rings that can be moved and rails fitted into the wooden floor.

In the base model, a Europallet will fit sideways while in the extra long version, three pallets can be fitted. Even in the crew van version there’s room for two pallets.

On top of the standard panel van there’s also a crew van, the Mercedes Vito Dualiner, and a people carrier in the shape of the Traveliner.

A full width bulkhead is fitted as standard and standard safety equipment also includes electronic stability control which is adaptive in that it calculates the cargo on-board should it need to activate the van’s anti-lock braking system.

Opt to have the towbar as a factory fit and it will come with trailer stability assist which will use the Vito’s brakes to help prevent the trailer from swinging out of control.

The van also comes with a system that automatically switches on the hazard warning lights should the brakes be pressed hard.

A driver’s airbags fitted is standard though it’s an option for the passenger.

Mercedes have also fitted disc brakes to the van to improve its stopping capabilities.

All of the engines in the Mercedes Vito range are excellent performers around town, on winding country roads and out on the motorway with a full load. They are all responsive and strong.

The cabin is a comfortable place to be for long journeys with everything well designed and close to hand and despite the height of the vehicle there’s little in the way of body roll on tight corners at speed.

Some potential owners may worry about the fact the Mercedes Vito has rear wheel drive but in most circumstances no-one will notice the difference except, perhaps, on snow. Otherwise the Vito behaves well and is a great van to drive.

This is greatly helped by a new suspension system which helps provide more grip and improves performance. There’s also the option of air suspension to help make the ride even smoother.

The standard kit for the Mercedes Vito is quite impressive, when compared with its rivals, and includes things like cruise control and Bluetooth connectivity as well as a multifunction steering wheel.

For the vans with manual gearboxes, there’s also a ‘start-off assist’ to help the fully loaded van get going.

Be aware though, like most Mercedes, there’s a long list of options which may be tempting but will add considerably to the price.

Get a Quote on a Mercedes Vito 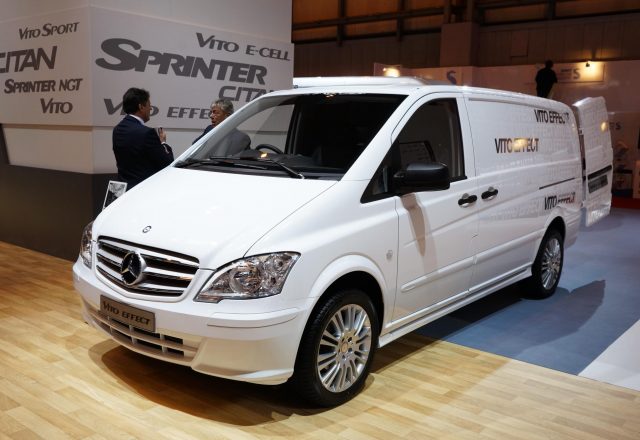 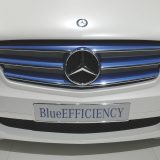 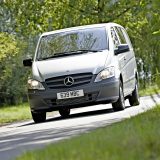 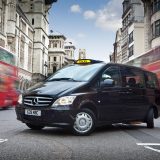