Nissan e-NV200 is a van for the future

Nissan has put a lot of thought into its e-NV200 by building on a van that is already a great product and adding batteries.

It has a range of 106 miles and a number of firms with big fleets have already put it through its paces so it’s already geared up for everyday work.

Designed for use in busy city streets, it’s one of the best electric vehicles currently available today and it’s the only large electric van on sale.

Indeed, with just the single speed gearbox on board, the van is easier to drive than its diesel stablemate as well as being much cheaper to run.

For anyone who is worried about its ability, the electric motor is responsive and it will travel comfortably at 70 mph.

The Nissan e-NV200 stands apart from its diesel equivalent thanks to its redesigned front end and it’s also slightly longer and wider as well.

The charging point for the van is under the nose and there’s improved pedestrian safety too – there needs to be because this van is almost silent and pedestrians will not hear the van coming.

Because it has zero emissions, is not eligible for the London congestion charge and increasing numbers will be used as taxis in the capital which means that we will begin to see more of this incredible van on our streets sooner rather than later.

For any van owner who is covering less than 100 miles a day, the Nissan e-NV200 is a great choice and will be a faithful workhorse that is incredibly cheap to run.

It’s a very good-looking van and Nissan have worked hard at ensuring it has lots of real world experience before it was launched which means that the batteries are going to be reliable.

The theoretical range of the van is 106 miles which means, according to Nissan, that a third of buyers may well enjoy its potential.

There are a couple of drawbacks that go against Nissan e-NV200: it takes eight hours to fully charge which means it will be out of action and not earning.

Obviously this can be done overnight but a rapid charge will take 30 minutes which helps to counter that argument.

However, when compared with a new rival such as the Ford Transit Connect, the economic argument becomes more obvious since the diesel rival has great economy and a much further range.

The bottom line is that the Nissan e-NV200 is a no-brainer for any business looking to enhance its green credentials and it is, with doubt, a great van to own and drive.

If you like the Nissan e-NV200, then have a look at the Nissan NV200, the Fiat Doblo or the Ford Transit Connect.

The Nissan e-NV200 has the same load space as its diesel stablemate; there’s 4.2 cubic metres available. The load bay itself measures just over 2metres in length and with the passenger seat folded down this will extend to 2.8metres.

Access is easy into the load space thanks to the double doors and a sliding door on each side. There’s the option also of a lifting tailgate.

Nissan have also fitted six lashing points to the floor to ensure the load remains stable.

The Nissan e-NV200 has the same load space as its diesel stablemate; there’s 4.2 cubic metres available. The load bay itself measures just over 2metres in length and with the passenger seat folded down this will extend to 2.8metres.

Access is easy into the load space thanks to the double doors and a sliding door on each side. There’s the option also of a lifting tailgate.

Nissan have also fitted six lashing points to the floor to ensure the load remains stable.

The Nissan e-NV200 comes with a variety of bulkheads including a full steel and glazed version and also a tubular bulkhead.

The van is also pedestrian safe because it has to be since they will not hear the van approaching and because of the batteries the side panels have had to be strengthened.

The first thing to notice about the Nissan e-NV200 is its excellent handling; it’s a great van to drive with exceptional manoeuvring and the silent operation means it’s also an unusual drive when compared to a diesel van.

Indeed, there’s no lag of any sort and there’s plenty of torque – 245Nm – so the van is a nimble operator around town. The motor does feel strained at speed though.

The Nissan e-NV200’s top speed is 76mph but this will drop to 60mph to help preserve the life of the batteries when necessary.

There’s also plenty of space on board with lots of headroom, even for very tall drivers.

The cabin of the Nissan e-NV200 is a nice place in which to spend the day working in and it has a car-like look and feel.

Indeed, a big part the dashboard has been taken from the Nissan Leaf which has the controls for the air con, radio and satnav. Nissan have also taken the Leaf’s instrument display and steering wheel.

Owners can also use a smartphone app which will allow them to monitor battery levels, start and stop the battery charge and also start-up the air con before they get in the van itself. 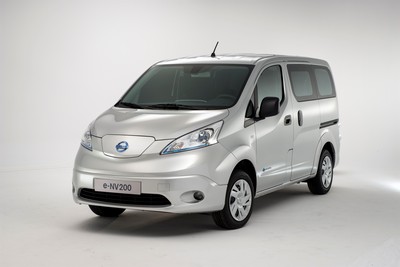 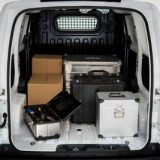 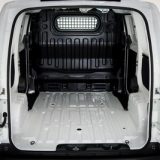 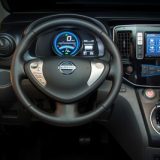 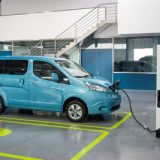