Choosing a great small van for hard work in towns and cities is made easier by the performance and abilities of the excellent Nissan NV200.

The NV200 is the sole work of Nissan and not a joint collaboration as with their bestselling larger vans and it manages to impress for lots of reasons.

The NV200 is ideal for working in towns, especially for anyone making lots of drops, since it has a tight turning circle and the light steering ensures the van is easy to drive.

The Nissan NV200 is popular around the world because its compact body is easy to manoeuvre and it has a large load space.

The diesel engine is frugal and responsive and many will be tempted by the green credentials of the firm’s excellent e-NV200 which is starting to grow in popularity (especially with green-minded firms).

In a crowded market, the van is really good at what it does though its suspension and dimensions let it down on the motorway but it’s a tough act to beat in towns and cities.

There’s a lot going for the Nissan NV200, particularly its strong performance and economy in towns.

The engines are refined and strong with plenty of torque at low speeds to make the NV200 a nippy and agile performer.

One of the drawbacks for the Nissan NV200 is that it only comes in a panel van though there are conversions available as refrigerated vans and Combi vans but these are built on the same chassis so the footprint is the same.

Also, the Nissan NV200 is becoming increasingly popular as a taxi in various cities and it’s likely we will begin seeing more of them on the UK’s streets cabs too – though the electric version of the van (the e-NV200) deserves closer attention because it has impressive performance and low running costs.

Ultimately, this is a popular van in lots of markets and for good reason – for firms looking at a strong performer in urban areas with lots of space and a decent payload then the Nissan NV200 makes for a suitable choice.

If you like the Nissan NV200, and have a look at the Mercedes Citan, the VW Caddy or the Ford Transit Connect.

The Nissan NV200 comes with just one engine and two power outputs. However, it is the excellent 1.5 litre dCi turbodiesel which is sourced from the firm’s partner Renault, and the power outputs are 89bhp and 110bhp.

Choose the 89bhp version and owners should see around 55mpg as fuel economy with CO2 emissions of 135g/km. The larger output engine has slightly lower economy of 53mpg and 139g/km of CO2 emissions.

Fuel economy is improved in the Nissan NV200 by opting for the firm’s n-tech package which includes a speed limiter and cruise control though every NV200 comes with a gearshift indicator to help improve economy.

The service intervals are at a respectable 18,000 miles or two years which should help to keep running costs low and there’s a three-year or 100,000 mile warranty.

The Nissan e-NV200 is also growing in popularity with its low running costs thanks to its hybrid engine.

There’s plenty of space on board the Nissan NV200 with a cargo area that is 2.04mtres long. At its narrowest point, the floor is 1.22metres wide – all helpful dimensions.

However, one of the big attractions for buying the NV200 is that the loading height is really low; it’s just 524mm from the ground.

In addition, there’s also an option for a folding passenger seat and folding mesh bulkhead which will allow for longer loads to be carried in the van.

This means there’s an impressive 4.2 cubic metres of space in the van which is capable of carrying a 739kg payload. This is equivalent for two Europallets.

Depending on which model is chosen, the Nissan NV200 comes with either a tubular or full steel bulkhead. There’s also the option to have a glazed bulkhead too.

There is the option of a ‘safety pack’ which will have electronic stability control and extra airbags as well as air con, fog lights, heated door mirrors and four more anchor points on the van walls.

The van is known to be reliable though it didn’t fair too well in the Euro NCAP crash tests, scoring only three stars.

There’s an impressive 1.5 litre dCi turbodiesel engine underneath the bonnet which is coupled to a five-speed manual gearbox and which develops 85 PS.

The engine is refined with plenty of torque, there’s 200Nm available at 2000 revs. For anyone needing more power there’s a version of the same engine with a 110 PS output that is coupled to a six speed transmission.

The van itself is quite slim and it runs on what appear to be very small tyres but this helps its manoeuvrability and it’s great to drive around town though it can bounce around a bit on winding country roads.

The van isn’t the best to drive on long journeys, especially on motorways, since the lower powered engine does struggle somewhat at speed and with a full load.

The cab itself is fairly bland though it has plenty of space; tall drivers will find there is plenty of headroom despite what looks like a small van from the outside.

There’s also a trip computer and a useful underseat storage included as standard.

Other models also get a rearview camera and electric mirrors and windows. The top spec model comes with cruise control, satnav and a speed limiter. 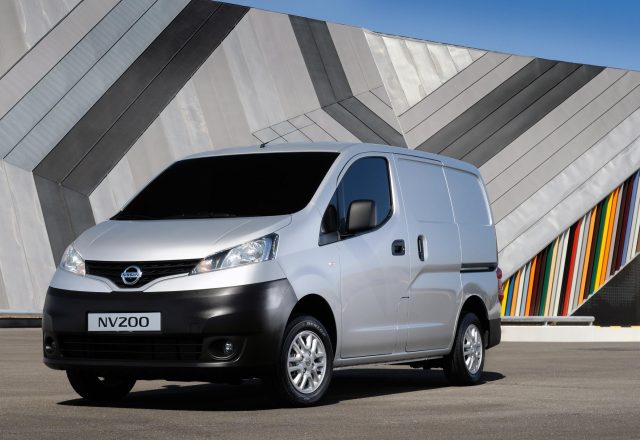