While the Nissan NV300 may be mechanically similar to several of its rivals there is enough here to attract potential buyers; it has one of the best warranties available. That is a five-year peace of mind guarantee and an extensive dealer network to help fix things when they go wrong. The construction is solid and while the interior is a straight rip-off of the Renault Trafic, it is a sturdy and sound construction and designed to take lots of punishment. Nissan is also aiming for the NV300 to become something of a mobile office and it’s a comfortable place to spend time and cover long distances in. While the NV300 isn’t a stand-out offering, there’s a lot to recommend it over the many rivals.

The Nissan NV300 has entered the medium sized van segment after the Primastar was brought to an end in 2014. For many, the NV300 offers an attractive and versatile van that fits in well to the firm’s commercial vehicle range. Despite this, there’s no mistaking the fact that it is a rebadged Renault Trafic – even the cab is a straight lift – but it does offer something more contemporary and has nice levels of handling. While this is a new offering from Nissan, everything on board the NV300 has been tried and tested and the impressive five-year warranty should ensure it ends up on lots of shortlist for potential buyers. The extensive network of Nissan dealers, particularly those with specific business service functions, will also help boost its attractiveness.

If you like the Nissan NV300 then take a look at the Renault Trafic, Ford Transit Custom and the Peugeot Expert.

The power for the Nissan NV300 is delivered by a 1.6 litre DCI diesel engine which has power outputs of 95 HP, 120 HP, 125 HP and 145 HP; the engines are mated to a six-speed manual box. The more powerful engine variants have twin turbochargers and also any eco-mode switch and stop-start to help fuel economy. The engines also have a 20-litre AdBlue tank fitted. The most popular unit with UK buyers is likely to be the twin turbocharged 125 HP engine which is also the most efficient; economy for the range is between 43mpg and 50 mpg with emissions as low as 145g/km. Running costs are also kept low with service interval set at 25,000 miles or every two years – it’s the only van in the segment to offer this. Nissan also offers five-year roadside assistance.

There are four sizes of the Nissan NV300 available including a L1H1 with 5.2 m³ of load area, the L1H2 has 7.2 m³ while the L2H1 has 6 m³ and the L2H2 has 6.6 m³. The van’s gross payload capacity ranges from 1,075 kg to 1,270 kg. Owners also have the choice of buying the Nissan NV300 as a nine seat Combi with two lengths, a six seat crew van and a platform cab. There’s basically a van for every type of need and with plenty of lashing points and easy loading, the NV300 is a practical van.

One of the plus points for the Nissan NV300 is the firm’s intention to help owners turn this into a mobile office so there’s a laptop storage area and cradles for tablets and smartphones. There’s even a removable clipboard holder and the centre of the rear seats can be changed into various positions and become a desk when necessary. There’s also plenty of safety equipment on board including air bags and a tyre pressure monitoring system as well as anti-whiplash headrests. Among the options are anti-rollover protection and an extended grip system – which is similar to the system on the Trafic which delivers more traction to the front wheels when needed for road surfaces and extreme driving conditions. There’s also the option of trailer sway control which will also control the trailer should it begin to sway out of control.

Despite its size, the Nissan NV300 doesn’t drive like many of its van rivals, it’s more akin to an MPV and its car-like interior helps underline this experience. The driving position is comfortable, and there is plenty of adjustment in the steering wheel and driver’s seat. All of the engines deliver smooth performance and help with the refined experience, it’s particularly good when driven at high speed with the more powerful engines delivering plenty of power when necessary for overtaking, for example. Around town, the van is a capable and solid performer, the suspension is nicely weighted to deal with rough roads and the steering offers accuracy.

Along with four body guises, there are three levels of trim with a basic Visia model coming with a full height steel bulkhead, electric heated door mirrors and electric windows. The next level up, the Acenta, has air conditioning and rear parking sensors. The rear seats also sees the middle portion folding down into a desk and there’s a load through facility for extra-long items. Owners wanting more equipment should look at the Tekna which features a 7-inch multimedia touchscreen which features sat nav and there’s also a speed limiter, cruise cultural and some models have 17-inch alloy wheels. The NV300 has plenty of cubby holes in the cabin and there’s a useful tray area on top of the dashboard. 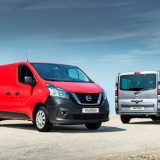 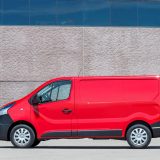 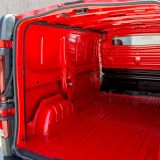 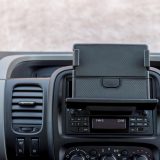