The Nissan Primastar isn’t just a rebadged version of the Renault Trafic or the Vauxhall Vivaro and has enough to differentiate it between its siblings to make it a decent choice for many.

With six body styles to choose from, the Primastar also comes with high or low roof options and there are two very good crew van options too.

The van also has one of the largest load spaces for its class and there’s a decent level of kit fitted, especially in the cabin.

Though there’s only one choice of engine to choose from, it’s a refined and impressive performer which returns a decent fuel economy.

Alongside the panel vans and crew buses, the Primastar is also available in freezer and chiller versions.

A revamp in 2010 saw the cabin being improved so it’s more car-like in appearance and functions though for many it’s still a great commercial van which will deliver results.

The Nissan Primastar range comes with a lot of versatility because there are so many body shapes to choose from. Some of the conversions are very popular and the crew bus option is also a good seller for the firm.

In addition, the handling for the Primastar is actually quite good and even with a full payload the van is responsive and a strong performer.

However, when pitched alongside the likes of its newer rivals, especially the excellent Ford Transit Custom, the Primastar is looking dated but it still manages to do a good job.

In its crew bus guise the Nissan Primastar is a functional and useful addition for many firms by offering a comfortable cabin for long journeys and a decent amount of load space in the rear that matches many vans.

In a competitive sector, the Nissan Primastar is still a popular choice which underlines its offering and its continued success.

If you like the Nissan Primastar then have a look at the Ford Transit Custom, Mercedes Sprinter and the VW Crafter.

With just the one engine under the bonnet – a 1.5litre dCi unit which produces 115bhp and has plenty of torque for great performance.

Depending on the body, the Primastar’s economy ranges between 36mpg and 42mpg with CO2 emission being between 178g/km and 207g/km. These are fairly respectable figures for the sector and the engine itself is renowned for being reliable and hard working.

The warranty is for 100,000 miles or three years. Nissan also says the van is designed for easy repair to keep running costs and insurance bills low.

The Nissan Primastar has one of the best load spaces in its class. Depending on body style, the amount of space ranges from 5 cubic metres to 8.4 cubic metres.

On most models there is a full steel bulkhead fitted though at the lower end this is switched for a ladder bulkhead which sits behind the driver’s seat.

Opt for a crew van and there’s space on board for six with a full height bulkhead which leaves enough cargo space to match a small van.

Even this size of load space should still fit a Europallet between the wheel arches and in the larger vehicles there’s a possible space for three Europallets.

There are also plenty of anchorage points around the cargo area and access is easy with the wide-opening rear doors. The sliding door is also a helpful addition and is wide enough to load a Europallet too from the side.

The Nissan Primastar is up against some stiff competition so it’s surprising that not all models come with electronic stability control, where most rivals now have it as standard.

The van does have ABS and disc brakes are an option as are a passenger airbag and fog lights.

In addition to the useful six-speed manual gearbox there’s also the option for a semi-automatic six speed transmission.

The Primastar also comes with brake force distribution which is helpful in applying braking pressure where it is needed most to avoid an accident and emergency brake assist. Nissan says the Primastar has one of the shortest stopping distances in its class.

The van also comes with an alarm and an immobiliser.

There’s only one choice of engine for the Nissan Primastar – an effective 2.0litre dCi diesel with 115bhp. The Trafic and Vivaro versions have this and the 90bhp variant though this is the better unit of the two.

Interestingly, Nissan doesn’t label its models with ‘Eco’ or ‘ecoFLEX’ as Renault and Vauxhall do but the models have similar economy figures.

Depending on the body, the Primastar’s economy ranges between 36mpg and 42mpg with CO2 emission being between 178g/km and 207g/km.

The engine itself is a good performer with a full load with 300Nm of torque proving useful. The six speed gearbox really comes into its own on a motorway and it’s a fairly quiet and refined performer at speed.

Though the Primastar can get noisy at speed in those models with a ladder bulkhead.

Of the trim options for the Nissan Primastar, the lower end versions are rather basic – they don’t come with electronic stability control for instance.

Anyone wanting ESC should opt for a safety pack which has the feature along with a passenger air bag and fog lights.

Nissan also have several choices for the front seats which include a single and dual passenger seats. There’s also plenty of storage spaces in the cab in the dashboard and underneath the seats.

The driver’s seat and steering wheel can be adjusted to find the most comfortable position.

The vans do come with Bluetooth connectivity with inputs for MP3 players and iPods. There’s also manual air con and a three button key allows the driver to lock/unlock the either single doors or all of the doors.

Get a Quote on a Nissan Primastar 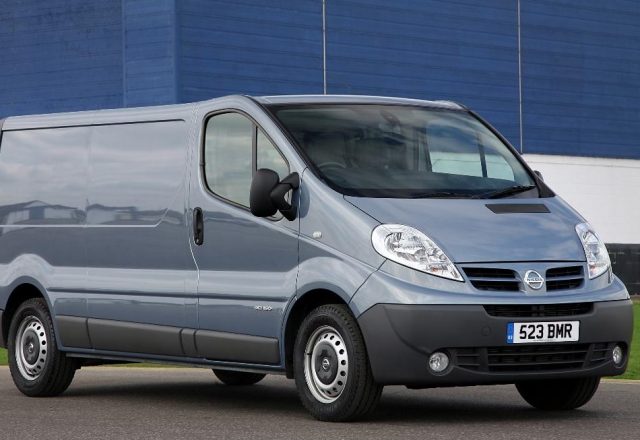 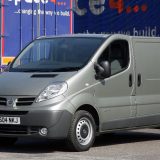 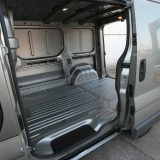 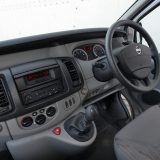 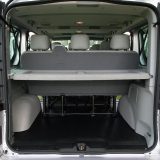 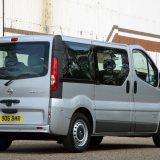