For those who need a small van, the 2017 all-electric Renault Kangoo Z.E. should really attract attention. This is the bestselling small electric van in Europe and its range has been boosted by 50% to 170 miles. It’s a nice vehicle to drive and it has low running costs; it has sold more than 25,000 units since its launch so there’s a market out there for these vehicles. The lack of range has always been an issue to tempt people from vans with engines but the Kangoo Z.E. offers a sound alternative for those willing to try – particularly if you have somewhere secure to charge the vehicle overnight.

The Renault Kangoo Z.E. is a great choice for those who have a short daily distance to cover and are looking for something a little bit different from a conventionally powered van. Plus, what’s not to like about the less-than-2p-per mile running costs? The 170 mile claimed range will prove useful to many couriers and delivery drivers and the van itself is nice to drive; it’s a good performer around town and the Kangoo Z.E.’s environmental credentials are hard to beat. For those potential owners who worry about the range they will get from the van, Renault offers a mobile phone app that will direct them to the nearest public charging point wherever they are in Europe. Essentially, if you are looking for an all-electric panel van, the Kangoo Z.E. is among the best currently available and should be on your shortlist.

If you like the Renault Kangoo Z.E. then have a look at the Citroen Berlingo Electric and the Nissan e-NV200.

The big attraction for an all-electric van is the opportunity to enjoy running costs as low as 2p per mile. Plus, there’s no congestion charge to pay since the emissions are zero.

A battery for the Renault Kangoo Z.E. can be leased on a monthly basis to help keep the purchase price low and it is a higher density 33kWh battery that’s been optimised to deliver better performance than the van the new model replaces. The 44 kW motor delivers 60 HP with the power available from a standing start.

The battery will take six hours to fully charge and a one hour charge will top up the van to cover 21 miles. Previously, the all-electric Kangoo took eight hours to charge and had a shorter range. It helps too that there’s an option of eco-mode which will increase the van’s range by 10% by modifying the throttle and the engine map. However, Renault is upfront about the van’s performance in winter months when the range will drop to 90 miles.

The Renault Kangoo Z.E. has a warranty of 100,000 miles or four years and for the first two years there’s no mileage limit. For those who hire the battery, Renault offers a warranty for it. There’s also breakdown cover, which also includes running out of charge, as well as three years’ European cover and the paint has a three-year warranty and there is 12 years cover against corrosion.

There’s a choice of three variants for the new Renault Kangoo Z.E. with the standard van having a load capacity of up to 3.6 m³ and two seats while the Maxi trim sees that capacity boosted to 4.6 m³. There’s also a Maxi Crew van that will carry a small crew with five seats and a capacity of 1.3 m³. There’s also an innovative multi-position bulkhead. The vans also have six anchorage points in the load area, while the bigger Kangoo Z.E. models have 14 anchorage points.

One of the big changes for the Renault Kangoo Z.E. is the addition of a new heat pump for the climate control system that maintains the van’s driving range without worrying that by using the heater the range will diminish quickly. Safety equipment for the Renault Kangoo Z.E. includes electronic stability control, ABS with electronic brake-force distribution, remote central locking and hill start assist.

It helps too that the quiet nature of the all-electric Kangoo also sees the installation of Z.E. Voice which will alert pedestrians to the fact that there is a (silent) electric vehicle in the area. The van’s option list includes rear parking sensors, a satnav system, Renault’s infotainment system and a body coloured front bumper.

There’s no doubt the Renault Kangoo Z.E. is a great performer around town with silent operation and low running costs; the acceleration is quick with the automatic gearbox performing well. Indeed, it’s a relaxing driving experience and even corners at speed are accomplished without body roll. The cabin has been well-designed and the hard-wearing materials will take a lot of punishment. For those who need to know, the van’s top speed is 80 mph and it will reach 62 mph from a standing start in 22 seconds; so, while it’s great to drive around town, joining a motorway, for instance, will need to be done carefully.

For the money, there is a decent amount of equipment with the entry-level Business trim offering electric mirrors and front windows, the DAB radio and a dashboard with A4 storage. There’s also a full steel bulkhead but not on the crew vans. Options for the Kangoo Z.E. include cruise control, rear view camera, rear parking sensors and air conditioning. 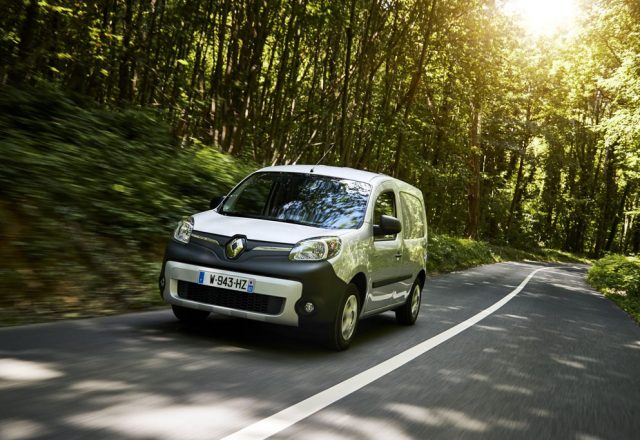 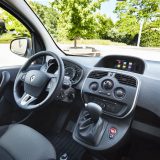 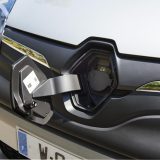 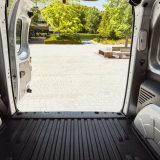 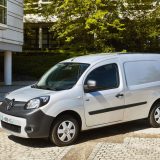 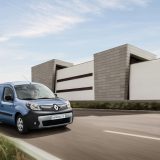 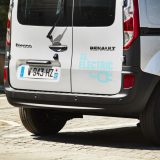 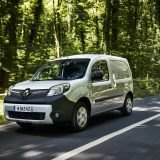