Renault Master is leading the crowd

There’s no doubt that the Renault Master is a great van with lots going for it – decent performance and economy, a stylish cab and an impressive reputation.

But when it’s based on the same platform as the Vauxhall Movano and the Nissan NV400, why would you buy the Master?

The simple answer is that the Renault Master manages to be different in many respects.

Secondly, when sat in the cabin it has the Renault styling which helps make it look a lot more stylish and practical.

Many van makers claim that their cab doubles as a mobile office but in the case of the Renault Master this really is true with a number of good ideas and storage spaces to hand to make this a relaxing place to be.

The Renault Master feels well bolted together and for its sheer range of body styles and uses it deserves closer inspection; there are lots of drivers and firms who are dedicated fans who swear by the van.

It should also be noted that in the face of growing competition and new impressive offerings from rivals, Renault gave its Master a facelift and introduced twin turbo diesel engines which had better economy.

The Renault Master has been popular since it was first launched in 2010 and a revamp two years later really made this into a polished article.

There are three trim levels, though the entry level model is fairly sparse, but the performance and handling of all the vans is very good. It’s also a comfortable place to be with the cab especially well thought out.

Compared with its fellow siblings, the Vauxhall Movano and the Nissan NV400, the Renault Master manages to stand apart and have the edge on its rivals in many respects.

There’s only one engine with several power outputs to choose from but it’s an excellent performer and the van will suit many businesses looking for an excellent and reliable performer but its real talent may be in that it offers a mobile office for any drivers who spend a lot of time on the road.

Remember too that Renault is Europe’s number one van manufacturer for a reason.

If you like the Renault Master, then have a look at the Mercedes Sprinter, the VW Crafter or the Ford Transit Custom.

Pinpointing the actual running costs for the Renault Master capital depend on the body style chosen, but in the panel van version the official figures show the vehicle will return around 41mpg.

There’s also a four year warranty, or 100,000 miles, depending on which comes first though the first two years are an unlimited mileage warranty. The firm has also added roadside recovery for the first four years of ownership too.

There are a variety of load spaces depending on the body style of the Renault Master but all of the panel vans come with plenty of load lashing points and a full height steel bulkhead as standard.

The standard panel van has 22 cubic metres of load space and 2.2 tonnes of payload in both front and rear wheel drive versions.

Renault have also fitted a sliding door on the near side of its vans as standard and the rear doors will open to 180 degrees. Both of these doors are unglazed but there are options for glazed replacements.

The side door is wide enough to take the Europallet and the heaviest loads are suitable for the Master with twin rear wheels.

In a competitive segment, it is surprising that electronic stability control was not fitted as standard on the Renault Master until the middle of 2014 – though it’s an option on the entry level model.

The van also comes with rear parking sensors and a driver’s airbag fitted as standard, it’s an option for the passenger, and there’s a full steel bulkhead fitted to the panel van as standard too

Underneath the bonnet of the Renault Master is an impressive 2.3 litre twin turbo diesel engine with two power outputs to make it one of the most refined and a powerful engines of the market.

Potential buyers have the choice of either a 135PS or 165PS output. Both engines emit around 180g/km of CO2.

Both of these engines are very good and Renault is also supplying single turbo versions with 110PS and 125PS power outputs.

The van handles well under a variety of conditions and with a full payload and there’s a helpful gear change indicator to help improve economy and driving style.

All the engines come with a manual gearbox with six gears and the dash-mounted gearstick is well placed.

Perhaps the pick of the engines would be the 125PS which has the torque and the power to move heavy loads easily and smoothly.

The Renault Master has one of the best thought-out and well-designed cabins of any van around with lots of storage spaces and nice touches to make this a true mobile office.

There’s no need to leave expensive items on view since the passenger seat cushions lift up to provide a large storage area.

There’s also a clever clipboard, an option, which is fitted into the dashboard which can be set vertically to hold paperwork and the middle seat can be folded flat to become a laptop table.

The entry-level model for the Renault Master is fairly sparse equipment-wise but a lot cheaper than the next model up.

These dearer versions of the Master come with remote central locking, hill start assist and the firm’s excellent Grip Xtend which offers more traction on loose surfaces such as snow and building sites.

Options include a passenger airbag, TomTom satnav subscription, a glazed bulkhead and plylined side panels.

Although one of the downsides to the cabin is that many struggle with the van’s infotainment system which is not intuitive but worth persevering with!

Get a Quote on a Renualt Master 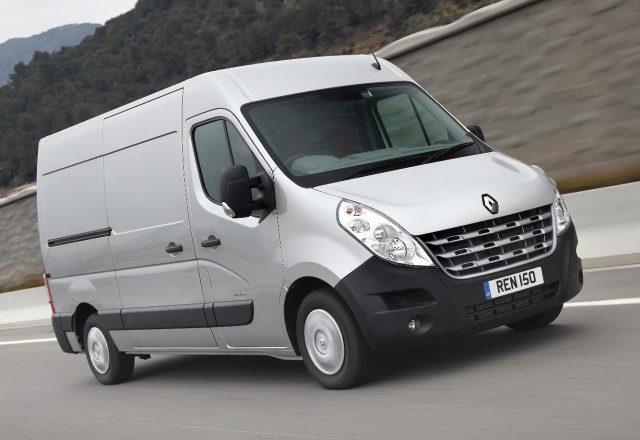 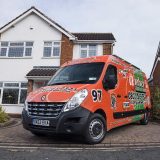 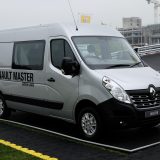 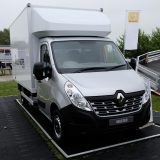 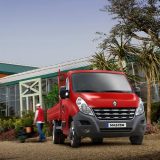