Toyota Hilux lives up to his famous history

With more than 18 million sales since its launch in 1968, the Toyota Hilux has an impressive pedigree that is being maintained by the latest incarnation. For one thing, the running costs are lower thanks to a new improved engine and there is more space in the cabin for passengers. Indeed, the comfort and safety levels also been improved but this is, in part, a move by Toyota and other pick-up manufacturers to meet the growing demand from families wanting an impressive pick-up as their everyday vehicle. Despite this, there’s still a lot to recommend the vehicle for those wanting a workhorse for their business and it’s a sound performer when towing or carrying heavy loads over rough terrain.

The Toyota Hilux will do everything anyone wanting a pick-up is expecting and will do it with style; the car’s running costs are dear for the segment at around 42 mpg but there’s plenty of equipment on board. The refinement levels have been improved and it’s a comfortable vehicle for long journeys – but the economy figures might prohibit this. However, for those wanting it for work purposes, the Hilux is undoubtedly an impressive offering and still delivers one of the best performances off road or on rough terrain. There’s no doubt that a growing demand from families who want SUV-like performance has had an impact on the latest offering and while this doesn’t detract from the Hilux’s previous handling abilities it has made the vehicle more comfortable – though body roll is noticeable now at speed when cornering.

If you like the Toyota Hilux then have a look at the Nissan Navara, VW Amarok and the Mitsubishi L200.

The Toyota Hilux would undoubtedly be more popular if the new engine delivered more impressive fuel economy. As it is, the 2.4 litre engine which replaced the popular 3.0 litre unit will return 42 mpg with emissions of 178g/km though other models have lower figures. For the single cab model, the economy is less than 40 mpg but that’s still better than some rivals. Opt for the automatic transmission, which does not have the smoothest of changes, and the economy will drop to around 36 mpg with emissions of 204g/km. However, for peace of mind, the Toyota Hilux comes with 100,000 miles or five years’ warranty which matches the segment leaders plus the first year warranty includes unlimited mileage.

There are three body styles for the Toyota Hilux to choose from including the single cab with two seats, the extra cab featuring four seats and the double cab with five seats. The most popular choice in the UK is for the Hilux Double Cab which also has a wider range of trims to choose from. The newer model has better towing capacity and a larger load bay than the model it replaces though the vehicle is wider and longer as well. The load bay available ranges from 1,525 mm, for the double cab, to the single cab’s 2,315 mm. However, the new model is around 130 mm wider than previously so it is wider than many of its rivals – a boon for those who need the extra width. The Hilux can carry loads ranging from 1,025 kg and will be able to tow at least 3,500 kg.

The Toyota Hilux has always been regarded as a safe vehicle and there’s lots of safety equipment included in the latest model with some models coming with autonomous breaking which is a system for helping the vehicle to brake when the system detects an imminent collision. There are also lots of air bags, including curtain airbags, and most models offer a seatbelt pre-tensioners. Other safety features include emergency brake assist, hill start assist, ABS and trailer sway control. It should also help that the new ladder frame chassis is around 20% stronger than the previous model’s so the crash protection will be greater.

There’s no doubt that the Toyota Hilux has had its on-road performance boosted and now has car-like handling – a growing preference for buyers in this segment. It’s a nice vehicle to drive on long motorway journeys and is a good performer around town where the engine offers an agile performance. The suspension has also been redesigned and is better at coping with heavy loads though, like other pick-ups when it is empty, the ride can be bouncy. The four-cylinder 2.4 litre diesel engine produces 148 bhp and is coupled to either a six-speed automatic transmission or a six-speed manual box. A more powerful 2.8 litre engine is promised in the future. Fitted as standard is selectable four-wheel-drive plus various systems to help boost traction and stability control.

For those who want to cover the load bay area, there is a good choice of load covers and hard tops. The cabin is a comfortable place to spend time with plenty of space for the occupants. Most British buyers will be opting for the Hilux double cab since this has more space, particularly much more than the extra cab where the rear bench is only designed for occasional use. Other standard equipment includes immobiliser and alarm and some versions have a reversing camera to help when parking what is a large vehicle. 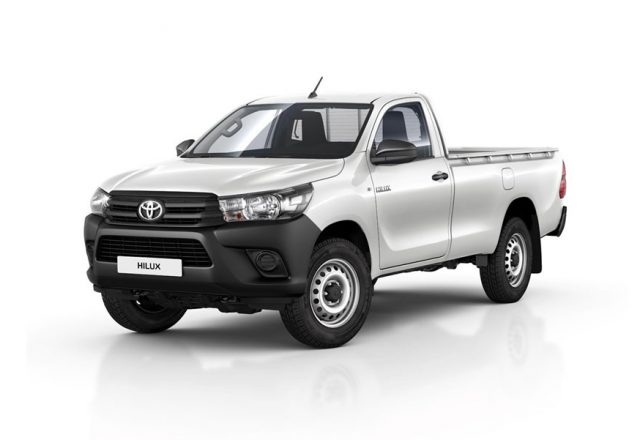 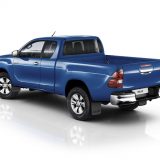 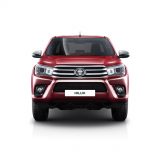 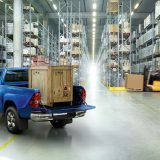 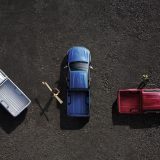 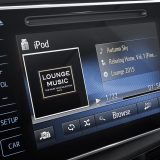 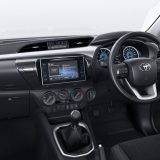 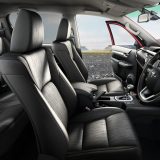 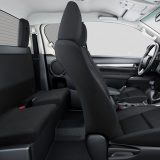