There are three body styles for the Toyota Hilux line-up which is one of the world’s best-selling vehicles – for very good reason.

Those choices include a single cab, an extended single cab and double cab formats.

The single and extra cab Hilux – essentially the single cab with two drop down seats in the rear – are aimed at the working vehicle market so the spec is fairly basic but the double cab is well equipped.

Handling for the Toyota Hilux makes it one of the best to drive in this class though some way find that the seats are quite low to the floor to help counter the height of the vehicle.

There’s no doubt that this is an impressive vehicle to drive off-road with some startling abilities.

However, most people will use it for transporting goods and tools to their workplace and it’s one of the better pick-ups to own.

As stated in the introduction – the Hilux is one of the world’s best-selling vehicles (around 13million since its launch in 1968) which means lots of people have come to appreciate its on-road manners and off-road skills. This is a workhorse that’s worthy of the name.

There’s no doubt that the Toyota Hilux is an excellent pick-up and it’s a great performer on- and off road.

It’s for its off-road abilities, particularly on building sites or rough track that the Hilux will really stand out from the crowd.

The current Toyota Hilux is the sixth generation and is still essentially based on the original version despite a number of a revamps and tweaks, the latest of which was in 2012.

That revamp saw a range of improvements to the exterior and interior but it’s still the same winning formula that Toyota have come to rely on.

Essentially, the Toyota Hilux is one of the better-known and better looking of the pick-ups available in the UK market, and it’s also a much better drive that any of its rivals.

If you like the Toyota Hilux then have a look at the VW Amarok, the Ford Ranger or the Isuzu D-Max.

The first thing to note is that the Toyota Hilux, just like every other pick-up, isn’t very cheap to run with fairly poor fuel economy.

The 2.5 litre diesel engine is a good performer but only returns 38mpg while having CO2 emissions of 194g/km.

In day-to-day running, most owners will achieve similar figures but go off-road, or two a heavy trailer, and the economy will drop severely.

Toyota also supplies its Hilux with an impressive 3.0 litre diesel which is not only powerful but will return around 36mpg but has CO2 emissions of 203g/km – this though drops to 33mpg in the automatic gearbox version.

Another noticeable difference is to fit one of the Truckman hard tops and the pick-up’s economy should improve as a result.

The revamp brought in new high-tech features and some new looks from the new bonnet and radiator grille to a bumper and headlights.

Toyota also brought in new sidebars and new wheels to help prolong the life of this cracking pick-up.

The Hilux also comes with a five year warranty.

With a good range of body styles, there’s also a good range of load spaces. For instance, the single cab offers the longest load space in its class at 2,340mm and in the extra cab version this is reduced to 1,830mm.

Possibly the most practical choice is the double cab model since its load space is 1,545mm though all models are comparatively slim when put next to their rivals at 1,520mm.

In addition to its load space, the Hilux can pull a trailer weighing up to 2,800kg.

In addition to feeling well built and rugged, the Toyota Hilux is also a safe vehicle to drive with passengers and driver airbags fitted as standard though only the Invincible gets vehicle stability control as standard – which is a surprise.

Under the bonnet of the Toyota Hilux is a 2.5 litre diesel engine that produces 144bhp and this power is sent to all four wheels via a standard locking rear differential.

There’s also a 3.0 litre diesel engine, with 170bhp, which is used just for the Invincible double cab which has an automatic gearbox or five-speed manual transmission option.

All Hilux models have part-time four wheel drive but it’s an easy process to engage 4×4 and some might find the cab is noisy at speed.

Essentially, there are a lots of reasons for buying this pickup but most potential owners will be looking at how it pulls and both engines produce around 343Nm of torque. That’s with a manual gearbox, opt for the bigger engine and an automatic transmission and the torque figure improves to 360Nm.

The Hilux is a comfortable vehicle to drive and it’s a great performer regardless of where it is, it’s great out on the open road, it corners well on winding country roads though its turning circle is still rather wide (its more than six metres).

The entry level versions of the Toyota Hilux don’t have a lots of kit but they are aimed at being ‘working vehicles’.

Go up the range and there’s more kit though the best is the Toyota Hilux Invincible which comes with an impressive touchscreen satnav system.

The 2012 revamp also introduced an impressive touchscreen which is in the centre of the dashboard – models fitted with this also come with Bluetooth connectivity.

More importantly, Toyota offers its pick-up with a range of packs and options to suit those who are wanting to personalise their vehicle for work purposes or want to use it for a lifestyle vehicle.

Get a Quote on a Toyota Hilux 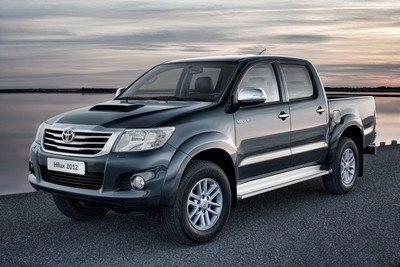 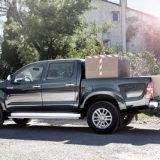 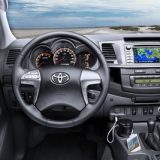