It’s one of the most popular small vans in the UK, and the new Vauxhall Combo-e builds on its sibling’s good points. There is a zero-emissions range of 171 miles and a useful load volume of 4.4 m³. Be aware though that the Combo-e uses the same platform as the Peugeot e-Partner and the Citroen e-Berlingo – so check prices and dealer networks before signing up.

The Vauxhall Combo-e is available in L1H1 or L2H1 lengths and will find an enthusiastic market from those wanting to switch to battery power. The van is also rated to tow 750kg and comes with trailer stability. It is packed with equipment and for any firm or private user looking for a zero emissions van, this one is hard to beat.

The all-new Vauxhall Combo-e is a fully electric variant of the award-winning Combo van. With a WLTP range of up to 171 miles from a single charge, the new Combo-e is an ideal companion for business and private users after a zero emissions van.

Featuring a 100kW (136hp) electric motor and 50kW battery, the new Combo-e supports up to 100kW rapid charging with an 80% charge completed in 30 minutes. Longer, L2H1 variants of the Combo-e feature a maximum load volume of 4.4m3 and a maximum load length of up to 3,440mm.

The 50kWh lithium-ion battery is made up of 216 cells and 18 modules and has been placed under the floor between the front and rear axle, resulting in no compromise in load volume compared to the petrol and diesel variants of the Combo van. The battery position also results in a low centre of gravity, which improves cornering and stability even when fully loaded.

The 100kW (136PS) electric motor produces 260Nm of torque and can accelerate from 0-60mph in 11.2 seconds, with a controlled maximum speed of 80mph – making it suitable for both city use and longer motorway journeys. To improve vehicle range, the Combo-e features sophisticated regenerative braking technology, with ‘B’ mode increasing the regenerative braking for maximum energy recovery.

The Vauxhall Combo-e shares the same capabilities as its 2019 International Van of the Year winning Combo petrol and diesel variants.

There are growing reasons to buy electric vans, but with the new Vauxhall Combo-e there’s just one. It is simply a great electric van based on the award-winning Combo. With a range of 171 miles from a single charge, most van users will find it will meet most of their needs. It also offers car-like handling and comfort levels and thanks to the battery being under the floor, the van’s stability and cornering, even when fully loaded, is greatly improved. In the segment, the Combo-e is a hard to beat offering.

If you like the Vauxhall Combo-e, then consider the Citroen e-Berlingo or the Peugeot e-Partner.

The running costs for an electric van are much lower than they are for a diesel-powered alternative. The Vauxhall Combo-e will cost just a few pence per mile and signing up for a cheap off-peak electricity supply deal will bring those costs down even further.

On top of that, there’s currently no road tax to pay or congestion charge – and the van is able to access those cities with low emission zones.

Add in the fact that there are fewer moving parts so servicing and maintenance costs are reduced, the total running costs for the Combo-e are impressive.

The van also supports rapid charging, the battery will be recharged to 80% of its capacity in 30 minutes which will prove useful for those firms and van owners struggling with ‘range anxiety’.

The Vauxhall Combo-e comes in two lengths, they are the L1H1 and the L2H1.

The L2H1 variant is 4.75 m long with a load volume of 4.4 m³. The van can also carry two Euro pallets in a row, and there are six tie-rings for securing loads on the floor.

The Crew variants of the Combo-e will seat up to four passengers, plus the driver, with equipment and cargo being stowed safely behind the bulkhead. There’s also a flap in the mesh bulkhead that will enable longer items to be carried.

The Vauxhall Combo-e neatly meets the growing demand for small vans to have car-like handling and comfort levels.

Drivers get an eight-inch display with satnav and multimedia radio. The system is also smartphone compatible.

There’s also automatic emergency braking and a 180° rear camera to help when reversing.

Vauxhall has also added its innovative ‘Overload Indicator’ so drivers are alerted when the van’s load is near to its maximum payload capacity.

Drivers will also appreciate the ‘flank guard’ system that avoids costly scratches and dents by using sensors when manoeuvring.

Like its siblings, the Citroen e-Berlingo and the Peugeot e-Partner, the Vauxhall Combo-e delivers a quiet, refined and very comfortable driving experience.

There’s a 50kWh lithium-ion battery that is placed under the floor between the rear and front axles. This helps lower the centre of gravity to boost ability.

The van also uses regenerative braking technology to top up the battery and boost its range.

The Combo-e is a swift mover from a standing start since all of the torque from the motor is available and progress is swift. 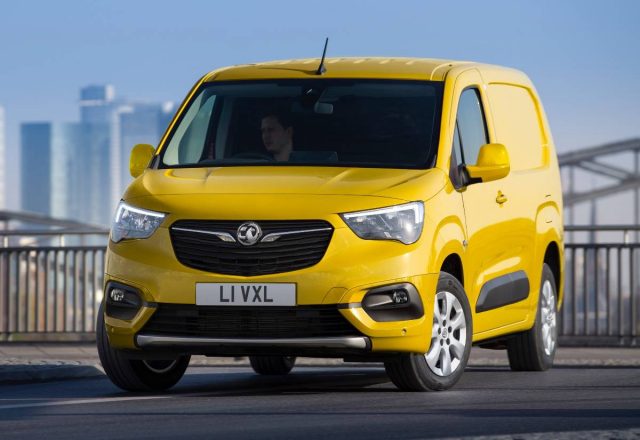 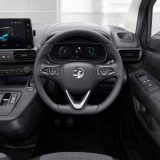 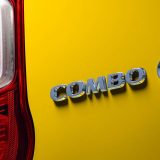 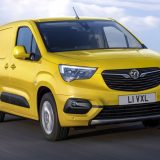 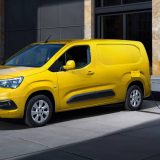 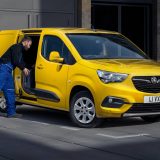