Most owners looking for a nippy van that’s a good performer for deliveries in towns will find the Vauxhall Corsavan meets most of their requirements – but its greatest attraction is the fact that it’s really cheap to run.

There’s a growing demand for car-derived vans and the leaders are the Vauxhall Corsavan and the Ford Fiesta Van which have excellent handling to move small loads efficiently.

However, unlike many of its rivals the Corsvan was designed from the outset to be a van and is not just a small car with the rear seats removed and the rear windows blocked in.

The result is a nimble performer that can carry 550kg and still return an impressive 83mpg.

However, alongside the excellent economy figures is a van that is designed to be worked hard and the cabin is a comfortable place to be all day long. The diesel engines are particularly good though the petrol version requires a lot of work at high speed but it’s a decent performer around town.

As one of the leading small vans, there’s a lot going for the Vauxhall Corsavan which will dominate the sales charts for a long time to come.

There are just two models to the Vauxhall Corsavan line-up but both come with decent levels of kit and performance.

Most people will be attracted to the incredible economy from the ecoFLEX engine which is a strong and responsive performer around town and the car is undoubtedly a good van.

With its car-like handling and strong abilities, the Corsavan is a logical choice for many buyers who get a stylish and rewarding van that can carry a decent amount of cargo in a load space that is easy to access.

There’s little to criticise the Vauxhall Corsavan because it’s such a great product which is the result of a Vauxhall standing back and designing a vehicle specifically for a task and coming up with a great vehicle that is a deserved success.

If you like the Vauxhall Corsavan, then have a look at the Ford Fiesta Van, the Citroen Nemo and the Fiat Punto Van.

One of the biggest attractions for buying the Vauxhall Corsavan is that it’s a cheap small van to run with the 1.3CDTi ecoFLEX engine returning an incredible 83mpg.

That figure is for the combined fuel cycle and many owners should get similar figures when driving around town.

In addition, the Corsvan is also cheap to insure since it is in the Group 1E bracket.

Service intervals are set at 20,000 miles or one year, whichever comes first.

The Vauxhall Corsavan comes with a three-year or 60,000 mile warranty.

The Vauxhall Corsavan has a load space of .92 cubic metres and the ability to carry up to 550kg in a load space that has a full-length solid steel flat floor. There are also plenty of lashing points too.

The Sportiv model comes with a rear tinted windows but both versions also come with an optional extra long load cover to stop prying eyes seeing what’s on board.

Access to the load space is easy thanks to the wide tailgate which is high enough for the driver to not hit their head it regularly – it’s 650mm high.

However, one of the problems of these small vans is that the rear sill is usually quite high which prevents heavy objects being lifted into the load space. This isn’t the case for the Corsavan though the sill is still higher than some vans but lower than many car-derived rivals.

The Vauxhall Corsavan is a safe car to drive and comes with driver’s airbag, anti-lock braking system and seatbelt pretensions though electronic stability control is an option.

Vauxhall have fitted straight-line stability control which will help keep the vehicle under control when braking and there’s also cornering brake control.

Vauxhall have also fitted a half height steel bulkhead and there’s a mesh bulkhead option too.

There’s also emergency brake assist which uses electronic brake force distribution to help that can stop in an accident as well as turning on the hazard warning lights to alert other road users.

Because the Vauxhall Corsavan has essentially the same dimensions as the firm’s Corsa, the little van is a nice handler and enjoyable to drive around town.

It’s also a practical choice which is aimed at being a cheap van to run rather than being a high performance vehicle.

There are two 1.3CDTi engines: the 75PS output is a decent performer but the ecoFLEX version with 95PS will see economy of around 83mpg and CO2 emissions of 89g/km. Those are very impressive figures and help to underline the van’s efficiency and potential economy.

The ecoFLEX engine utilises items like stop-start, low resistance tyres, lower suspension and better gear ratios to help boost its economy and make it one of the most fuel-efficient small vans available.

Even the diesel engines without ecoFLEX will return 72mpg for the 75PS version and 64mpg for the other.

Essentially, the Vauxhall Corsavan is great to drive around town, it’s easy to park and there’s good visibility for the driver.

Depending on the load, the engines are good performers though the 1.2i litre petrol variant struggles with a full load at speed but it will still return around 55mpg.

The Corsavan’s cabin has been well-designed with lots of space and legroom and it’s a comfortable place to spend the day in; it’s also been designed to take a lot of punishment. The seats are also supportive and there’s plenty of storage in the cab to.

It should be noted too that the diesel variants can also pull a 1,200kg trailer.

With just two models to choose from, the Vauxhall Corsavan has a decent spec level with standard kit including electric power assisted steering and driver’s airbag.

Options for both models include a rubber floor mat which should take a lot of punishment and a cargo area load restraint net.

Get a Quote on a Vauxhall Corsavan 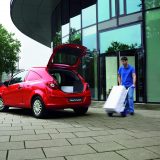 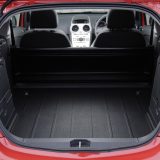