While many pick-up and van makers will claim that their vehicles offer car-like handling, few really do live up to expectations, but the Volkswagen Amarok does deliver on that front. It’s competing in a tough segment and sets itself apart as a premium offering and for the money buyers get a solid build quality and a stylish new look. The interior has the feel of a VW Tiguan and with its nimble handling and good grip on slippery surfaces, it’s a great pick-up for many reasons.  However, it’s not quite as sure-footed as some SUV’s are and potential owners should be aware of this before buying.

With prices starting at £32,493 it’s not the cheapest pick-up available and there are better value vans – but, and this is a big but, the Amarok is stylish and offers great handling. It’s an all-round impressive offering.

If you like the Volkswagen Amarok then take a look at the Toyota Hilux, Mitsubishi L200 and the Nissan Navara.

Boosting the engine size to a 3.0 litre V6 for the 2017 model means drivers will enjoy economy of around 36 mpg with emissions of around 203g/km. It’s a great performer and will power the pick-up from 0 to 62 mph in eight seconds, with the engine producing 237 bhp and coupled to the eight-speed automatic transmission.

The VW Amarok has a variety of servicing packages to keep costs low and owners can pay a monthly fee to cover the service and/or maintenance. There’s also a three years’ or 100,000 miles warranty – which can be extended.

One of the best things about the Volkswagen Amarok is its ability to take a full load up a 45° incline and also deal with ramp and departure angles easily as well. The load bed is just 1.5 m long and 1.6 m wide which equates to 2.5 cubic metres and most models come with a lashing ring in each corner for securing the loads.

This means the load bed is large enough to accommodate a neuropathic and is also durable plastic finish to help protect the bed itself. Options include a range of covers for the rear area including lockable tonneau covers.

However, the Amarok will carry a payload of 1 tonne and towing capacity has been increased to 4.5 tonnes.

The Volkswagen Amarok only has the double cab as a choice and it’s packed with technology and gadgets. Safety kit includes the firm’s award-winning automatic post-collision braking system, rear-view camera, ParkPilot to help drivers park and electronic stabilisation though many owners will also come to enjoy the car’s hill start assist function when it’s necessary.

Volkswagen has rather gone against the grain by upgrading its 2.0 litre diesel engine and for the new model there is a 3.0 litre V6 TDI unit which impresses. Indeed, it’s the only six-cylinder engine in the segment and there are three power outputs, the 221 bhp offers lots of performance and with 550Nm of torque, there’s plenty of pulling power as well, even from low revs so the new model is much better at pulling than the model it replaces. This particular engine will return 37 mpg with emissions of 199g/km. All of the engines sound quiet, even when pressed into high-speed action, and there’s plenty of poke when accelerating. The eight-speed automatic transmission is a smooth and quick changer to help deliver an impressive ride.

Behind the wheel, there’s no doubt that this is a great pick-up that delivers car-like handling, and this isn’t just an idle boast from Volkswagen, though at high speeds the rear end bounce is noticeable when the load bay is empty.

For those who need the extra traction, there’s an easy gear selection for offloading but the hill descent control will deal with most of the issues and the all-wheel drive system is excellent over slippery and rough surfaces.

There’s no doubt many drivers will opt for the Volkswagen Amarok as a lifestyle vehicle and while it’s great to drive on rutted country lanes and steep inclines, it’s also surprisingly refined and nice to drive on roads as well. The suspension delivers a comfortable ride and the steering offers good feedback.

There is a a lot to be said for the height of the car, it’s nearly 2 metres tall and the high ground clearance makes going off-road much easier, it’s also good for wading through water at depths of up to 500 mm; which could be a boon for those who live in areas that flood regularly.

The Volkswagen Amarok is being pitched as a premium offering, hence the price tag, so potential buyers should be looking forward to lots of equipment. In this instance, VW does not disappoint though the entry level model is rather sparse for the money. The interior is impressive and it’s an all-new design, including the dashboard fascia and the seats are comfortable for long journeys. The cabin is a much more comfortable place to spend a long time in than many of its rivals, particularly the Toyota Hilux.

Among the equipment list is Bluetooth connectivity, air conditioning, electric windows, alloy wheels and a 12v socket. There’s also the firm’s infotainment touchscreen system which links up with Apple Car Play, for instance, and DAB radio.

The options list includes rear and front parking sensors, which are highly recommended to help with parking, and a multifunction leather steering wheel on the top models. 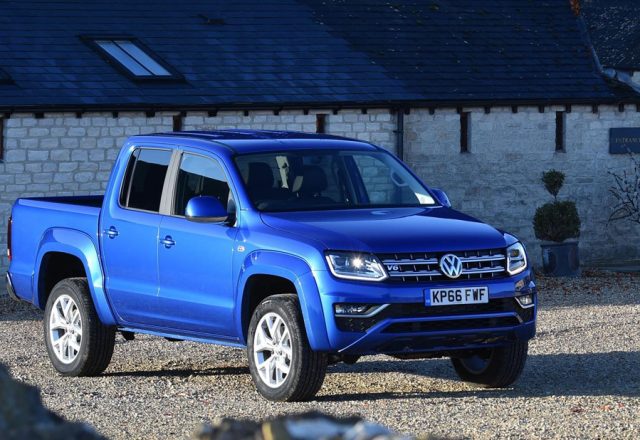 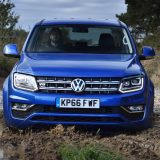 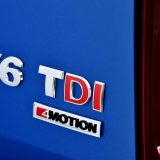 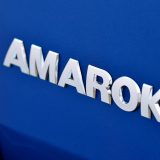 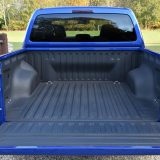 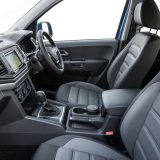 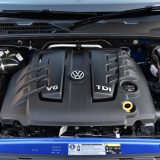