Equipment boost for the Volkswagen Caddy

It’s already won a clutch of awards and the revamped Volkswagen Caddy is a tempting proposition thanks to a big boost in equipment levels. Owners will find higher standard equipment levels and more safety features as well; the lower prices for the range’s petrol engine models is also a key selling feature.

Indeed, after its launch in 2015, the Caddy’s engineering and design won plaudits along with the introduction as standard of a post collision braking system. The 2018 model year will see the fitting of autonomous emergency braking, known as AEB and with city emergency braking which has been praised by automotive research centre Thatcham Research as an important step forward in van safety.

The Volkswagen Caddy has had its prices lowered, VW says it has ‘realigned its price structure’, so the advanced TSI petrol engines are more affordable. There are just three trims available, and the Startline is more than £1,000 cheaper than the model it replaces for the 1.2 TSI 84 PS version. In addition, another good reason to buy the Caddy is for the extra levels of safety equipment and most owners should find that their insurance premiums will be 10% lower because of the autonomous braking system from VW.

If you like the Volkswagen Caddy then have a look at the Fiat Doblo, Mercedes Citan and the Ford Transit Connect.

The 2018 Volkswagen Caddy still retains a wide range of petrol engine options with three fuel efficient TSI petrol units. They include a 1.2 litre 84 PS unit, a 1.0 litre 102 PS engine with three cylinders with the range topping four cylinder 1.4 litre producing 125 PS having the option of VW’s seven speed automatic PSG transmission. There are also diesel engine options for the Caddy with the petrol units returning around 47 to 54 mpg while the diesels return between 56 and 62 mpg. There’s also the option of a BlueMotion Caddy with revised gear ratios and engine tweaks to deliver economy of more than 70 mpg and emissions of around 103g/km. Volkswagen says that because of its autonomous braking system owners will find that the average insurance premium will be around 10% cheaper when compared to those vans who don’t have the systems fitted – which could be a big saving for some.

There’s a good range of body styles for the VW Caddy including a window van and a five seat combo. There’s also a choice of wheel bases and for those who need the extra space, then the Caddy Maxi will meet your needs. The load volume for the Caddy range from 3.2 cubic metres to 4.2 cubic metres with a maximum payload of 857 kg. Access to the load space is by split rear hinged doors and sliding side door – there’s an option for a second sliding door on the opposite side. The load space measures 1,779 mm. There are larger load spaces among competitors but the ease of access, payload and rewarding drive means the Caddy has the edge over many of them.

The technology and safety levels for the revamped Volkswagen Caddy are impressive with equipment levels boosted for every trim. Indeed, the Caddy is considered to be the safest van in its segment. When it was unveiled, VW added a post collision braking system as standard and now they have fitted autonomous emergency braking which has been praised by Thatcham Research as ‘the most significant development in vehicle safety’, in their opinion, since the introduction of the seatbelt. Volkswagen says that its Caddy is now the safest light van on Britain’s roads thanks to its extra levels safety kit. The firm says owners and fleet operators will find that along with lower running costs, there will also enjoy less downtime because they’ll have fewer crashes and scrapes.

Among the new standard equipment is a leather multifunction steering wheel, driver alert, AEB and multifunction display. The higher end of the range comes with climatic air conditioning while the range topper, the Highlight, has the firm’s satnav fitted as standard.

Essentially, the Volkswagen Caddy retains the same car-like handling and nifty performance around town since this is 2018 revamp tweaks a decent offering rather than being an all-new creation. The interior is built to withstand heavy use though it is rather bland as a result. There’s also a good touchscreen infotainment system available for the higher end models and the new safety kit is impressive. Out on the road, the Caddy’s stance means it is a sound vehicle to drive around town and on motorways at speed, the handling is good with engines delivering the performance when necessary. It’s also noticeable that the suspension has been improved which smooths out the bumps on our roads remarkably well and even without a load on board, the handling and stability of the Caddy is excellent. Being a VW, the driving position is firm but it’s a good vehicle to drive over long journeys though the passenger seat is more cramped than rival offerings. The cabin also offers various storage options including a large overhead space for A4 paperwork, a covered glovebox and there is a large overhead shelf as well.

Get a Quote on a Volkswagen Caddy 2018 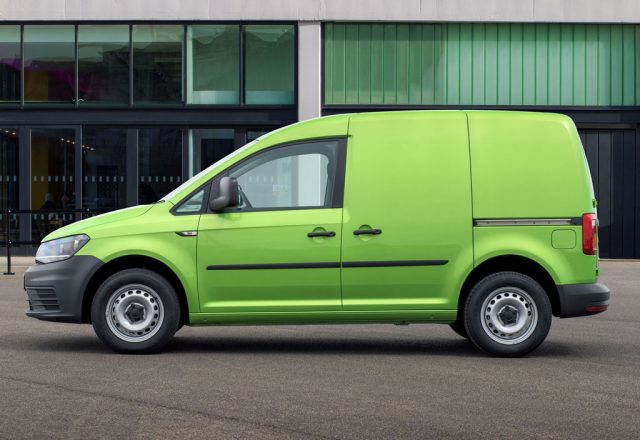 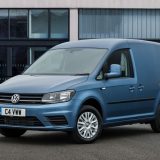 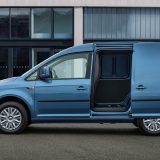 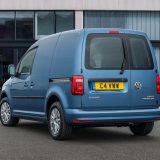 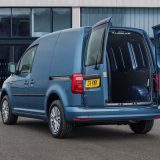