The VW Crafter is one of the best panel vans available, it is on the dearer side and though the vehicle is produced alongside the Mercedes Sprinter, the vehicles are completely different.

The Crafter comes in the dropside and tipper guises as well as other conversions – some of which can be done in the factory and are covered by the firm’s warranty.

Apart from its stylish good looks, VW have put together an impressive package to help people choose this as an impressive van to own and run.

From its excellent residual values to its fuel saving technology, the offering is impressive and underpinned by an unlimited mileage, three-year warranty which also covers add-ons that have been factory fitted.

VW have also made their van offerings impressive by putting together a network of 69 repair centres across the UK (and another 27 authorised centres) which offer fixed service pricing to help keep costs under control.

All of this underpinned by an incredible peace-of-mind offering from VW which covers every new Crafter with three years of roadside assistance, no matter how many miles are covered by the owner in the UK and most of Europe.

So while the VW Crafter may be a tad dearer than some rivals, the build quality and aftersales offering is second-to-none.

With many van manufacturers now revamping their offerings to meet new Euro regulations, the same is also being planned for the popular VW Crafter which will sell its new vehicle from late 2016.

The new van will be built in Poland and it’s likely to be an impressive offering.

Until then, the VW Crafter still offers owners with a workhorse that is capable of meeting just about every need. Indeed, the van is a popular choice for conversions and its GVW is rated at 3,000kg, 3,500kg and 5,000kg which makes it an ideal base to convert from.

Alongside this is the fact that the Crafter is still winning awards and many still believe it’s one of the better panel vans available today.

And even though it shares a chassis with the Mercedes Sprinter, the VW Crafter is probably the better of the two vans and offers a great deal for what is a polished product.

Indeed, VW must be doing something right since sales for the Crafter have rocketed this year.

If you like the VW Crafter, then have a look at the Ford Transit Custom, the Iveco Daily or the Mercedes Sprinter.

Volkswagen has brought out a new 2.0litre TDi engine for its Crafter range: the impressive 114PS and 163PS variants are Euro 6 compliant which are being offered on most models, particularly those with kerb weights between 2,355kg and 2,815kg in the long and medium wheelbases.

This means that the Crafter is among the most refined and cleanest of vans.

The 114PS variants can also be ordered with VW’s BlueMotion technology which will improve fuel economy so that owners should see the van return around 35mpg on the combined fuel cycle with CO2 emissions of 210g/km.

The van also comes with a three years or unlimited mileage warranty which matches its main rivals and helps to soften the blow of costly repairs because there will be no surprise repair bills.

The firm is renowned for the reliability of its products and that’s also true for the Crafter which has been designed to take a lot of punishment.

With such a flexible line-up, the VW Crafter has a wide range of payload and load spaces: the smallest load space available is 2,600mm while the largest will take five Europallets.

Access to the load space is helped by a large sliding side door and there are plenty of tie-down rings and load anchor points in the load space. There’s also an option to add a second sliding door as well as electric sliding doors.

There are three wheelbase is to choose from which are capable of shifting loads of up to 2.9 tonnes and there are four body lengths which enable the carrying of items of up to 4.7 metres in length.

In addition, with three roof heights it means the Crafter can carry up to 17 cubic metres of cargo.

All VW Crafters come with a full steel bulkhead though there’s option to have a glazed bulkhead instead. VW also offers a bulkhead complete with a sliding door for delivery vehicles so that drivers can access the load space easily.

The Crafter also comes with an impressive range of rubber and wooden floor coverings, as well as plywood sidelinings.

Unsurprisingly, the van comes with electronic stability control as standard as well as electronic brake force distribution and a traction control system. All of these are useful systems to have in place when roads are slippery or dangerous to drive upon.

The break force distribution system works by calculating the load weight on the van and its distribution and then applying braking power to where it is needed to prevent skidding and swerving.

Other safety options include a speed limiter and passenger and curtain airbags.

There’s also an automatic system that switches on the Crafter’s hazard warning lights under heavy braking.

The engine is surprisingly impressive and offers great performance at speed, particularly on motorways for long journeys and the six speed manual gearbox is an excellent performer.

The suspension also impresses and it deals with heavy loads very well and when there’s no weight in the load space, the van is still a good performer.

The VW Crafter is rear wheeled and there’s no lean on corners and everything feels sturdy and robust.

Indeed, there’s plenty of power at lower speeds, especially to get a heavy load moving, and the engine is sprightly and responsive.

There’s no doubt that the VW Crafter will impress and it’s one of the best equipped vans on the market. The driving position is excellent gives a great view of the road though the seat can feel rather firm on a long journey.

The seating position itself can be adjusted easily and there’s plenty of space on board including a foldout table in the middle seat which appears when that seat is folded flat.

Standard kit includes electric windows and there’s a range of value for money packs including one that includes rain sensors, automatic lights and headlamp washers.

Other options include cruise control, parking sensors and a reversing camera which is linked to the dashboard monitor. The options list is quite extensive as it is pricey, adding air con, for instance, will add four figures to the purchase price.

Buyers don’t have to go mad for the options because the VW Crafter is well-equipped and the comfort levels and reliability will make up for most of the options available.

Get a Quote on a VW Crafter 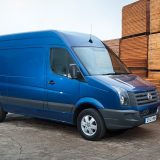 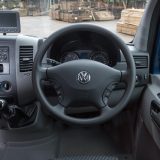 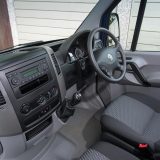 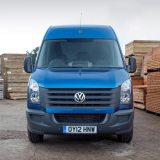