Practicality and tech make the VW Transporter a sound choice

For many, the VW Transporter is the best van currently available and here at commercialvehicle.com we agree. The BlueMotion version offers economy of 52mpg – a tad better than the normal economy of 47mpg. Along with a solid build, the sixth generation of the Transporter is a panel van that is great to drive. The new T6 doesn’t look that much different to the fifth generation but the Transporter is evolving – much like the VW Golf – so while the looks are familiar it’s a new package.

The army of VW Transporter fans won’t need a reason to buy but the latest version and the 2015 relaunch sees the van being better than ever. There’s a lot comfort to be had on board and while many rivals might promise ‘car-like’ handling, the Transporter delivers a composed stance and good road manners around town and on the motorway at speed. There’s plenty of tech on board to make this a sound panel van to enjoy. While Ford will continue to dominate the segment, the Volkswagen Transporter deserves a closer look and it offers a sound alternative that will run for years.

If you like the VW Transporter than have a look at the Vauxhall Vivaro, Mercedes Vito and Ford Transit Custom.

The power for the VW Transporter comes from a 2.0 litre TDi engine producing a range of power outputs from 84PS to 204PS and which returns economy from 48 mpg to 52 mpg. The BlueMotion fuel saving technology is now fitted as standard and there’s also regenerative braking, start-stop and low rolling resistance tyres. Potential owners will also be impressed with the three-year warranty up to 100,000 miles and the first two years have no mileage limit. The warranty also covers the factory fitted additions. One of the big pluses for the VW Transporter is that there should be no surprise repair bills because of the solid build quality which means running costs are even lower.

As vans get more car-like so do the safety technology on board. The VW Transporter comes with automatic city braking, adaptive cruise control and post-collision braking. There’s also high beam assist and VW has also added a feature that attracted attention when the latest model was unveiled and that’s drive alert which is a system to check that the driver is not too tired. Other kit includes adaptive cruise control, hill hold assist and lane change assist. It’s also possible to order the panel van with the firm’s four-wheel-drive system, 4Motion, for those who need the extra grip.

Volkswagen have retained the chassis of the T5 since it offers great road-holding. The performance is smooth and the experience is refined and it’s a great van to drive on long journeys, particularly on motorways at speed. The firm’s seven speed DSG automatic transmission is excellent with smooth changes and in the short wheelbase model, the engine producing 102 bhp offers a nice and enjoyable level of performance. There’s a lot to like about the VW Transporter which is a comfortable vehicle that delivers true car-like handling. The engines are strong and for those in the short wheelbase guise, the 102 bhp engine, which is likely to be the most popular, will reach 62 mph in 15 seconds when mated to the five-speed manual gearbox and then on to a top speed of just under 100 mph. For those who need more power and performance, the Transporter is also available with bi-turbo engines which will bring the 0 to 62 mph time down to 8.5 seconds. It should be noted too, when the load space is empty the advanced driving dynamics are unaffected and the perfectly weighted steering delivers a great ride.

The whole offering of the VW Transporter is impressive and it’s not just about the build quality since the refinements and equipment levels help its popularity. There are two wheelbases, four GVWs, three roof heights and along with the panel van there are the Shuttle and Kombi versions too. The cabin has been redeisgned with new materials and seats and there’s a new infotainment system as well. The touchscreen provides access to DAB radio and Bluetooth conductivity as well as a satnav that will help find parking spaces and live traffic information.

The Transporter has a useful side sliding door that will take a Euro pallet and there are plenty of lashing points in the load area too. However, it is for the interior that VW has made big efforts and it’s a different cabin altogether from the model it replaces. Regardless of the trim selected, the level of basic equipment is impressive and comfort levels are high. The top range models come with climate control, leaving home lighting, heated windscreen, daytime running lights and an auto dimming rear view mirror. 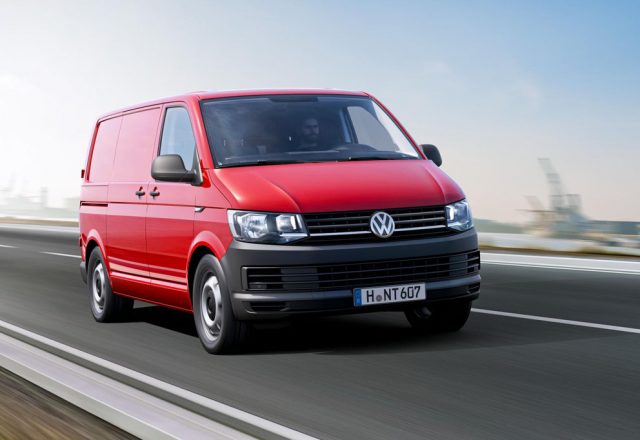 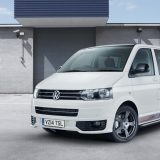 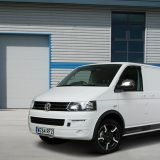 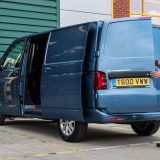 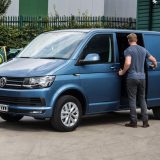 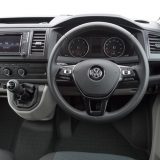 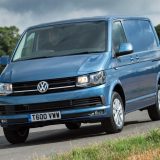 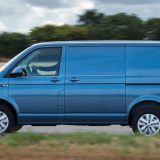