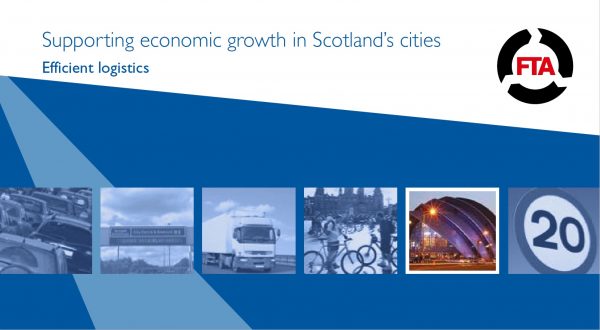 In a policy document, Supporting economic growth in Scotland’s cities, the Freight Transport Association (FTA) has urged commonsense in developing Scotland’s transport policy. 75% of freight in the country is carried by road, and where some road users find HGV’s lumbering beasts with toxic fumes, freight transport in commercial vehicles cannot be ignored without damaging the economy as a whole.

The report, which will be published on the FTA website in the next week or so, details some of the issues that the industry association wants to influence so HGVs and other road users can use Scotland’s roads in harmony. 5% of Scotland’s workforce is directly employed in road freight, and the industry carries 360,000 tonnes of freight every day – as an industry, road freight cannot be ignored.

Though it has a shopping list of nine issues that need to be tackled in concert with the road freight industry, the report looks at three issues in detail – air quality, delivery curfews and cycling.

Much of Scotland’s deliveries take place in the morning rush hour due to delivery curfews that were originally put in place in the era when trucks were noisy and dirty. The FTA policy document suggests that subject to observing a strict code of practice on night time deliveries, more deliveries could take place at night and thereby reduce congestion in the morning rush hour and during the day. This code of practice, developed with the Noise Abatement Society, can be seen on the FTA website here.

It is widely accepted that vehicle emissions are a greater health hazard to people than alcohol and tobacco combined in terms of cost to the NHS. HGVs are no angels when it comes to emissions, with large engines that do produce a lot of particulate and Nitrogen oxides.

Scotland’s government is leading the way with its proposed Low Emissions Zones, that could be in place as early as 2017. All commercial vehicles entering these areas must meet Euro VI emissions standards. The FTA document indicates that the industry as a whole has a lot to fear from this. London’s LEZ will likely follow suit in 2020, giving companies of all sizes the ability to conform around five years.

The document states, “That would mean any lorry older than three years would be excluded, whilst for some van classes those more than one year old would be banned…” Looking at it this way, all road haulage and LCV fleet operators would have to renew their entire fleets in order to enter Scotland’s LEZ’s in the next 24 months to comply! Not every business buys in a new fleet every two years, and this could squeeze out owner drivers and smaller fleets that operate older vehicles.

Since Team Sky and Team GB’s cycling teams’ fantastic year in 2012, cycling has had a major jolt in the UK and large numbers of people are starting to commute by bike. There have been several high profile fatalities of cyclists in the last couple of years, even as the rate of deaths and injury as a proportion of the growing number of cyclists has actually fallen nationwide.

Cities across the UK have been instituting cycling policies that are making the roads safer for cyclists, but may end up impeding the work of road haulage companies. Where when a cyclist tangles with a truck or van the cyclist always loses, often enough the cyclist may have taken a risk such as going past the offside of the vehicle at a junction. On this point, the policy document suggests, “not only do companies take steps to make their vehicles safer and to train their drivers, but that there is increasing awareness and education for cyclists about how to behave around large vehicles.”

Efficient logistics are core to a strong economy, and Scotland isn’t exempt from this basic rule of running an economy. Chris McRae, Head of Policy in Scotland for the FTA said, “Scotland’s cities are its economic power house and vital to its economic development. Efficient urban logistics are a key determinant of this, so facilitating the correct policies to enable this is essential.”

The increasingly confident nation needs to remember freight as part of its wider economy if it is to flourish in the coming years.