As a commercial vehicle, there’s a lot to like about the Land Rover Defender Hard Top.

The commercial version will be in showrooms later this year and available in 90 and 110 variants.

Land Rover has now confirmed the full specification, and there will be a choice of three diesel engines and all of the off- and on-road abilities of their standard Defender.

There are more powerful versions available of the same engine which can be specced for the 110 Hard Top.

Each engine has a mild-hybrid 48V electrical system

Fitted as standard is an eight-speed automatic gearbox, and there is intelligent all-wheel-drive, an independent coil spring suspension and a twin-speed transfer box.

Each of the commercial Defenders feature a full-height partition that will separate the front passengers from the flat rear load space.

Land Rover is also fitting heavy duty rubber floor mats to their cars as standard, and there are six lashing points.

The new Defender also features 58-litres of underfloor lockable storage – with the 110 having an extra 155-litres of storage hidden in the rear foot wells.

Defender Hard Top is named after a Land Rover model 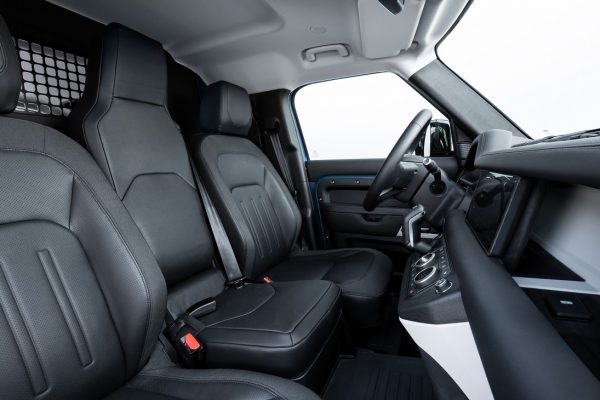 For those who are wondering, the Hard Top is named after a very early Land Rover model and the rear storage space has been maximised.

There’s also the option of a front jump seat to make this a three-seater.

Personalisation options include for the cargo area to be toughened with various materials and clever storage solutions can be added.

The option list also includes electronic air suspension for the 110.

There is a rear-hinged tailgate for easy access, and the payload capacity sees the 90 model capable of pulling 670kg, while the 110 can haul up to 800kg.

For many buyers – farmers especially – the Defender Hard Top will deliver years of hard wear in a stylish and well-built commercial vehicle.