The impressive all-electric Citroen e-Berlingo van has been officially launched by the van maker with a promise to shake up the UK’s compact electric van market.

The e-Berlingo is already a multi-award winner and was the country’s bestselling compact vehicle last year.

The new electric van is available in two body lengths and in panel and crew van variants.

It’s available in M and XL sizes, with the Medium model measuring 4.4 metres, and the XL is 4.75 metres.

The new e-Berlingo van offers a tight turning circle of 10.8 m, except for the XL crew van which is slightly larger.

Drivers of the new e-Berlingo XL have a maximum load length of 3.44 m, and a payload maximum of 751 kg.

Power for the new compact electric van consists of a 50kWh battery and an electric motor producing 136hp.

There’s torque of 260Nm, and a single charge will offer a range of 171 miles.

That figure makes the Citroen e-Berlingo van a sound choice for business and fleet users. 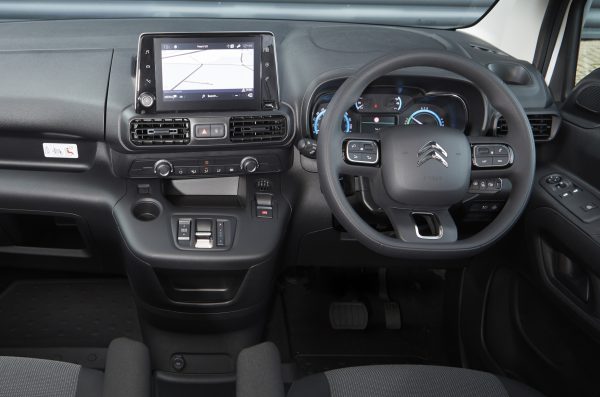 It’s also capable of supporting rapid charging with the battery being recharged to 80% of its capacity in 30 minutes.

Citroen says that the crew van variant is capable of carrying five people when necessary and users will enjoy low running costs in whichever guise they choose.

Part of the savings will come from the ultra-low emissions zones and congestion charges vans in some cities will not be paying.

There are three operating modes for drivers to suit on-road conditions and their loads.

They are Normal, Eco and Power and there’s a regenerative braking system to help optimise the van’s battery range.

The new offering is available with a choice of two trims – Enterprise Pro and Driver pro.

The range-topper is the Driver Pro which features black alloy wheels and body-coloured door handles, side rubbing strips and a rear bumper.

The battery features a 100-000 mile or eight-year warranty to bring peace of mind motoring.