The British-built Vauxhall Vivaro is proving to be a huge success with the van-maker announcing it has built one million models.

In addition, 52% of Vauxhall’s output is for export to help make it a van-making success story.

The one millionth model has been handed over to BT Fleet which is the biggest customer for the Vauxhall Vivaro.

So far this year, customers have snapped up 24,500 Vivaro vans and Vauxhall has shifted nearly a quarter of a million of them since its launch.

The Vauxhall Vivaro is successful 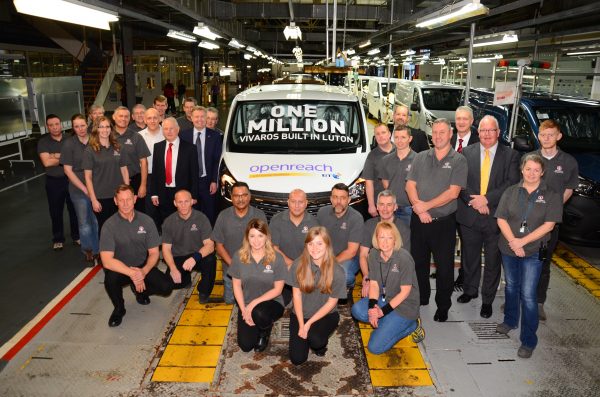 Vauxhall’s managing director, Rory Harvey, said: “Our workforce produces vehicles of exceptional quality so it’s no surprise that the Vauxhall Vivaro is successful and we are proud to celebrate this milestone.”

BT Fleet’s manager, Mike Langford, said: “The Vivaro has evolved to meet our workforce’s changing needs and I believe these vans are the best yet.”

With around 30,000 commercial vehicles in the BT Fleet, Mr Langford said that they work closely with vehicle manufacturers as well as their workforce to find the right product that meets their needs.

Launched in 2014, the new Vauxhall Vivaro secured 1,500 jobs at what is the UK’s last remaining manufacturing plant for vans.

However, the van’s success also boosts other UK manufacturers since 40% of the van’s content comes from local suppliers who have benefited from around £600 million of business.

Since Ford closed its Transit factory in Southampton in 2013, Vauxhall is now the number one UK van manufacturer.