It will also, claims Ford, set the standard for the UK’s one tonne van segment with an all-new cabin and enhanced fuel efficiency from the Econetic engines.

Indeed, the new cabin is aimed at creating an ideal mobile office so there’s improved comfort and   ergonomics as well as lots of storage. There’s also easy connectivity to the firm’s Sync3 infotainment system.

Under the Ford Transit Custom’s bonnet is the firm’s EcoBlue 2.0 litre engine which has been re-engineered to offer better fuel efficiency and emissions of 148g/km.

Among the technology added to the Ford Transit Custom is a first in the commercial vehicle segment with intelligent speed assist which will enable drivers to remain within legal speed limits and there’s also blindspot detection and cross traffic alert.

The new Transit Custom will begin production soon for deliveries starting early next year and the promised new plug-in hybrid will be launched in 2019.

The new hybrid promises an all-electric range of more than 30 miles with the range being extended by the firm’s 1.0 litre eco-boost petrol engine.

The trials for the new plug-in hybrid will begin with fleet customers from December in parts of London. 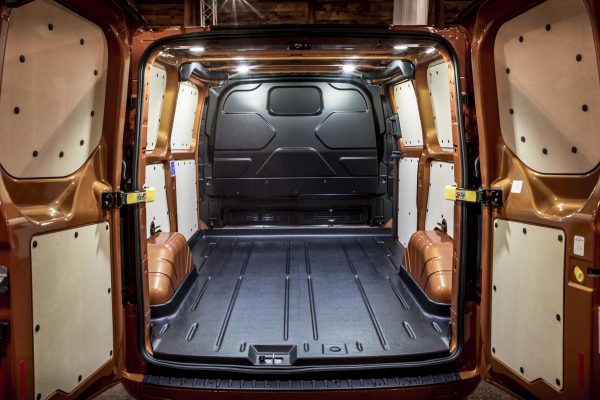 Ford has also revealed that its new Transit Connect and Courier vans will join the bestselling Transit family from the middle of next year.

Details of the new vans also coincide with Ford’s revelation that it is about to revamp its entire commercial van line-up for European customers over the next 18 months.

It helps that the Ford Transit Connect and Transit Courier are the UK’s bestselling commercial vans in their segments.