In a bid to meet the fast growing and for plug-in hybrid electric vehicles (PHEV), the new Ford Transit Custom van is likely to be a bestseller.

Ford have unveiled its new van which will be available from 2019 to customers around the world and there’s a 20-strong fleet currently available which is being tested.

Ford says that the van has been designed to improve local air quality and will run solely on electric power for most of its city journeys.

The testing is taking place in London to see how hybrid electric vans can help contribute to cities clean red targets and boost productivity for city users generally considered the toughest working environment for fans. 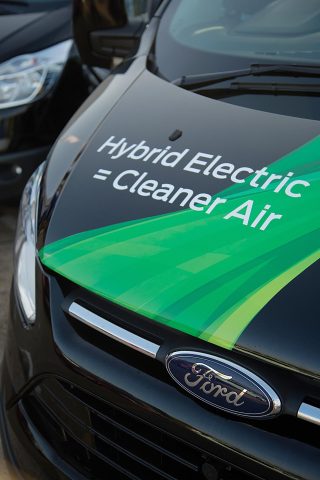 The plug-in hybrid Ford Transit Custom has an advanced hybrid system that will travel for 31 miles on electric power and have a raging range extender in the shape of the firm’s award-winning eco-boost 1 L petrol engine.

The engine will recharge the on-board batteries to help owners of the transit custom PHEV enjoy outstanding flexibility and efficiency.

The testing taken place in London should deliver interesting results since commercial vehicles make 280,000 journeys every weekday and rack up around 1,000,000 miles doing so.

However, the vans represent 75% of all peak freight traffic with central London seeing more than 7000 vehicles every peaktime hour.

A spokesman for Ford said: “clean vans, such as the plug-in hybrid Ford Transit Custom, being used in the trial, will help the fleet freight sector reduce emissions and place parking tackling a quality. We will use the data from the trial as a resource to encourage commercial firms to use green vehicles.

Ford says it’s the first volume manufacturer to offer PHEV technology to van buyers in this segment. In addition to the all-electric range, the Ford Transit Custom PHEV will have a total range of more than 310 miles and increased payload capacity than would be offered with battery only vehicles.

Alongside the London project, for is also looking to produce electric delivery vans, known as the vans, in a project with Deutsche Post DHL Group. They are predicting to build more than 2,500 vans by the end of the year.