The order books have opened for the latest version of the Volkswagen Transporter – the T6.1 as it will be known.

With prices starting from £21,635 for the panel van, interest will be keen.

The T6.1 has seen upgrades to its technology and connectivity features and there’s a new sharper look.

Initially, the firm is offering Highline and Startline models with plans to introduce the Sportline range later.

Engines for the Volkswagen Transporter 6.1

The engines for the Volkswagen Transporter 6.1 include a 2.0 litre turbocharged diesel engine producing either 90 PS, 100 PS or 150 PS.

The Highline model is also available with a 2.0 litre engine delivering 199 PS and is mated to a seven-speed DSG automatic transmission as standard. There’s also all-wheel drive available for some T6.1 combinations. 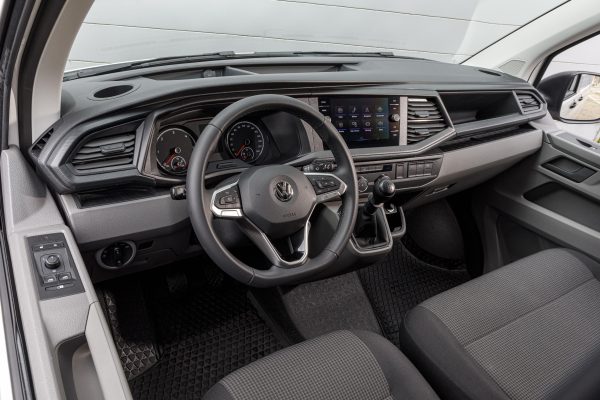 One of the big differences with the Transporter 6.1 is the new infotainment system featuring satnav and smartphone connectivity.

The T6.1 comes with an integrated eSim card

The services include breakdown call, eCall so the emergency services are contacted in an emergency, along with driving data and a vehicle health report.

Options with the ‘We Connect Plus’ system delivers speed alerts, an online anti-theft alarm, online route planning and a voice control system.

There’s also, for the first time, on those passenger-carrying T6.1 models, a digital cockpit with a 10.25-inch touchscreen with personalisation options.