The prices for the new Nissan Townstar compact van have been revealed and there’s a lot to like about the petrol or fully electric variants.

The van is the replacement for the very popular e-NV200, and the van maker says that it has been future proofed for businesses as growing numbers look to electrify their fleet.

The big appeal for the Townstar that it is offered with a choice of two powertrains, along with the latest driving technology.

For those firms wanting to enjoy zero emissions, the short-wheelbase Townstar offers a range of 183 miles with its 45kWh battery and will cost from £29,945.

When driven in urban areas, thanks to the regenerative braking system, the van will deliver 269 miles in ‘city cycle’.

Some models also feature an 11kW onboard charging system which will be the segment’s leader.

This will see the battery being recharged to 80% of capacity in just 40 minutes.

For those who still want a great van, the variant with the 1.3-litre petrol engine complies with the latest Euro 6d regulations. 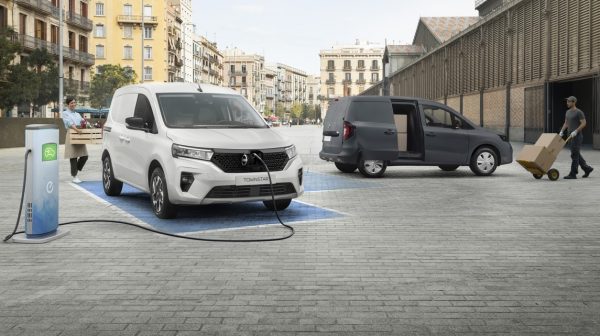 That’s not all, the new Townstar has more than 20 technologies fitted, including advanced driver assistance and safety technology.

There are four trims: there’s Visia, Acenta, Tekna and Tekna+.

The new van also offers a payload in the short wheelbase versions of 600 kg or, for the long wheelbase, 800 kg. The towing capacity is 1,500 kg.

Townstar has a 100,000 mile or pan-European five-year warranty

Nissan is also offering its Townstar with a 100,000 mile or pan-European five-year warranty, for the petrol version, while the EV offers 100,000 miles or eight years for the battery.

There’s also a bumper-to-bumper protection offering, and the petrol van will go on sale from 1 October, while the battery-powered town staff will be available from 1 December.

The impressive new Nissan Townstar is available to order now.