The Citroen e-Relay electric van is an interesting addition to the segment. Unveiled in 2021, the e-Relay, which is also known as the e-Jumper in other countries, has two battery choices and a range of either 73 miles or 139 miles. It’s the firm’s largest van and completes their bid to have electric choices for all of their models. It should meet a range of business and fleet needs, and the Citroen e-Relay is a comfortable and stylish van to drive. However, it is fairly identical to the Vauxhall Movano-e and the Peugeot e-Boxer since they are all built on the same platform.

The Citroen e-Relay is an all-electric offering that is worth considering. It’s also a pricey van, which will put potential owners off, but it offers an excellent EV for multi-drops around town and it’s also a smooth and comfortable cruiser. It’s available as either a chassis cab, window van or panel van so should meet most needs. The 37kWh battery offers a range of 73 miles, while the more powerful version offers 139 miles and delivers more torque across the rev range. It’s obviously designed at those firms who carry out lots of deliveries in a city with a large load space and low running costs being the most attractive features.

Citroen’s biggest and most capacious van is now available in the UK with a choice of two all-electric drivetrains. The introduction of the e-Relay fulfils the brand’s electrification commitment to offer 100% electric versions of each Citroen LCV by the end of 2021. Basic prices for the new battery-powered e-Relay start from £49,335 (after the Government Plug-in-Van Grant is applied, excluding VAT).

The new e-Relay is available exclusively in the well-appointed ‘Enterprise’ trim, and can be ordered as a panel van, window van or chassis cab – to suit a wide variety of fleet and business needs. Panel vans are available in L2 (5,413mm), L3 (5,998mm) and L4 (6,363mm) lengths, while the window van is offered exclusively in L4 form. Chassis cabs come in the most popular L3 length only.

The Citroen e-Relay offers low running costs and Citroen says that the total cost of ownership is much lower than an equivalent diesel-powered offering. Not only will owners find lower tax and servicing costs, but their fuel bills will also drop with this battery-powered van.

If you like the Citroen e-Relay, then consider the Mercedes eSprinter or the Fiat e-Ducato.

There are two choices of lithium-ion battery packs for the Citroen e-Relay. The 37kWh battery is mated to an electric motor producing 120 HP.

There’s also a 78kWh battery that has the same motor, and both offer lots of grunt.

The running costs for the e-Relay should be much lower than the diesel Relay model and using a wall box, the batteries will take either six hours for the smaller battery, or 12 hours for the larger battery to recharge.

However, both battery packs can support rapid charging which should see the battery being recharged to 80% of its capacity in 60 minutes.

The e-Relay also benefits from regenerative braking to top up the battery.

It helps too that along with lower maintenance bills and servicing costs, the batteries are covered by a 100,000 mile or eight-year warranty.

First, the Citroen e-Relay is the firm’s largest electric van and there’s a payload of 1,150kg. Citroen has worked hard to deliver a van with the same internal load volume as its diesel siblings so there’s no compromise on capacity and capabilities. The load volume ranges from 11.5 m³, to 15 m³. The payload, depending on the length and height of the e-Relay ranges from 740kg up to 1,150kg.

It’s worth noting that for those owners who want more space, the Renault Master ZE offers 1,490kg of payload.

The Citroen e-Relay is only available in the Enterprise trim, but this is a popular choice with many businesses and fleets. That means there is a lot of equipment onboard including a five-inch colour display with DAB radio and satnav.

Drivers also get a perimetric alarm and air-conditioning and there are rear parking sensors.

We also like the interior rear-view mirror that contains information about the e-Relay’s drivetrain including the battery charge, the voltage and current readouts as well as the current gear selection.

The Citroen e-Relay is a comfortable large van to drive, there’s no gear lever and drivers have three buttons to select which are either drive, neutral or reverse.

And while this is a big vehicle, the battery packs are located underneath the load floor which brings agility, and the body roll is contained.

There’s torque of 260Nm so there’s plenty of performance from a standing start.

There’s also noticeable difference in performance, however, when travelling at speed on motorways between the e-Relay and the diesel-powered sibling.

The van has single-speed transmission and progress is swift and the handling is cosseted. 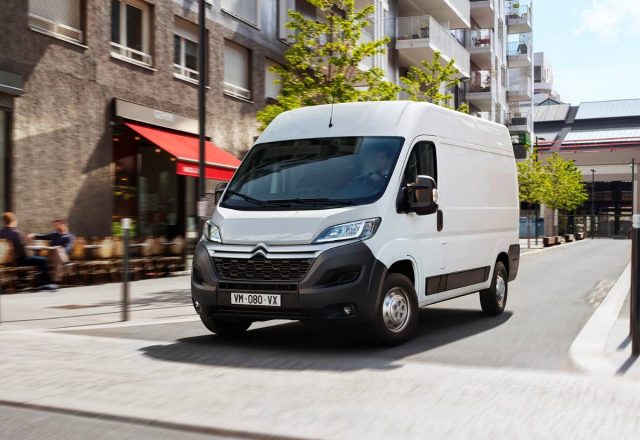 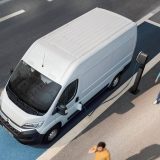 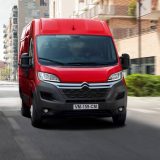 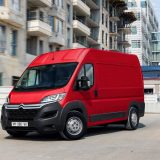