OK so it might not be best the best-looking van currently on sale but the Citroen Relay really does offer an incredible package.

Leaving first impressions aside for a moment, the biggest attraction for having a Relay is the sheer size of its load space though one of its biggest drawbacks for such a sizeable vehicle is its turning circle which is 2.2 metres.

This is a big van with an extra high roof that offers lots of practicality and it’s also a wide van at just over 2 metres.

In other countries the Relay is known as ‘Jumper’ and while it is very similar to the Peugeot Boxer and the Fiat Ducato (they are made on the same production line in Italy), the Relay manages to be different and offer a real alternative for the sector.

Obviously the load space is its biggest attraction and it’s a keen and able load carrier but it’s also suitable for being a mobile workshop.

A new Citroen Relay is due to hit the showrooms this autumn and until then the current model will continue to impress.

Essentially, the Citroen Relay is a great choice for those who are looking for a workhorse and prefer function over style. It’s also very well priced and comes with a decent spec list for the basic model and it’s a comfortable van to drive over long distances.

If you like the Citroen Relay, then have a look at the Vauxhall Movano and the Fiat Ducato.

The official fuel consumption figure for the Citroen Relay is around 39 mpg though in everyday use it will struggle to reach that; the average will be around 35mpg. The CO2 emissions figure is 195g/km. The van comes with a speed limiter and cruise control which may help fuel economy though driving style will probably be the biggest influence.

Servicing costs will depend on what the Relay is used for; service intervals can be up to 25,000 miles. For those running the Citroen Relay for high mileage duties or lots of stopping and starting will find those service intervals much closer though there’s an on-board computer to remind the owner when a service is due.

As we have already pointed out, the Citroen Relay is an incredibly large van: the biggest version is 3705mm in length and 1870mm wide. It’s also 1932mm high and the loading height is a useful 530mm from the ground.

The doors for loading are also big and wide to help make things easier and there’s a footstep on the rear bumper to help gain access into the rear. Three Euro pallets will fit easily sideways.

Access into the van is easy for both loading and access into the cab with a footstep beneath the wide doors help. There’s a useful side door as standard (though it differs in width depending on the model) and the cabin itself has a high floor over the gearbox and engine to help make things comfortable.

One thing to remember is the width of the Citroen Relay which may not be suitable for some and even with the door mirrors folded, this van is a touch over 2 metres wide.

While the overall package of the Citroen Relay impresses, that’s not quite the same impression for its safety features. The van comes with ABS and emergency braking assistance though there is just one driver’s airbag and the driver’s seat has an anti-submarine design to stop the driver sliding under the seat belt.

However, the Relay comes with the firm’s TrafficMaster Smartnav system which is easy-to-use and effective; it’s also fitted as standard and it can be upgraded. The system uses live traffic updates, has stolen vehicle tracking and emergency breakdown support. Citroen say the satnav is so useful that owners will save 10% in fuel costs alone! Interestingly, the siblings of the Relay, the Peugeot Boxer and the Fiat Ducato, don’t have this fitted.

The Citroen Relay is incredibly popular with van drivers around the UK for a number of reasons and one of them is for its comfortable ride. The interior is well laid out and the cushioned seats are very excellent though the suspension set-up is geared for dealing with rough roads. In addition, the width of the van helps to bring stability.

While the 2.2 litre four-cylinder turbodiesel engine may comply with Euro-5 regulations, it’s not the quietest of engines though the noise/rattle is not intrusive.

The engine is available in a variety of outputs, though the most popular is the 130 bhp version and Citroen also produce a 180hp variant. The bottom line is that there’s enough torque to pull the heaviest of loads and it’s a decent performer in low gears too.

All Relays come with a slick six-speed gearbox – there is no automatic option.

The cab for the Citroen Relay is also impressive with lots of space and comfort – the seats are excellent and supportive. The steering wheel and seat can be adjusted for rake and there’s a useful arm rest too. There are few good design ideas in play here: apart from lots of cubbyholes and slots for storage there’s also a dropdown box in the dashboard which will suit a laptop computer (there’s a built-in USB connector already fitted).

Citroen have also added a tray and cupholders to the rear of the central seat which will fold down to create a ‘picnic’ table in the cab and there’s also a clipboard on the dash for lists and instructions.

There’s a decent kit list for the basic version of the Citroen Relay which makes it an attractive option though there are extras which can be added including Bluetooth connectivity, air con and reversing sensors. There’s also the option to have a full height steel bulkhead.

Perhaps the only niggles with the Citroen Relay is that the handbrake is on the right hand side of the driver’s seat which means that the knuckles are sometimes caught on the door and there’s a shelf above the windscreen which protrudes enough for occupants to bang their heads on it.

Get a Quote on a Citroen Relay 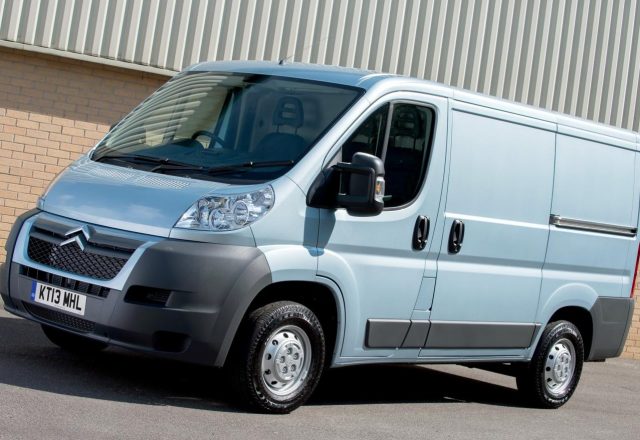 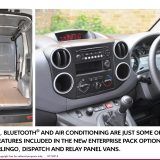