The Fiat e-Ducato is the firm’s first foray into electric van manufacturing, and they have done a decent job. Considering how competitive the segment is becoming, there’s a lot to recommend the e-Ducato with a driving range of either 113 or 230 miles. Perhaps the strongest consideration is the best-in-class payload the e-Ducato offers at 1,885 kg.

The Fiat e-Ducato offers an interesting big van in a competitive segment. It’s a rival to the likes of the Peugeot e-Boxer, the Citroen e-Relay and the Mercedes eSprinter. It’s not a cheap van to buy but it is a cheap big van to run. It’s also offered in a full range – another issue that sets it apart from most rivals – with chassis cab, panel van and passenger minibus versions available.

Richard Chamberlain, the head of Fiat Professional in the UK, said: “The Ducato will be 40 years old next year, but its success shows no signs of slowing down, and in fact we are now leading with new powertrain options.

“Everyone at Fiat Professional is so proud of Ducato and what it continues to achieve, particularly at this challenging time when it’s playing such an active role with our emergency services, local authorities and logistics companies operating on the frontline.”

He added: “We are all incredibly excited about the arrival of the new e-Ducato in showrooms because we know what a brilliant vehicle it is.

“It’s no exaggeration to say the e-Ducato is going to be a game-changer for many thousands of our customers looking for an electric van that’s more than a match for real-world jobs, whilst also making a positive step towards reducing their impact on the environment.”

Once a business gets over the potential price tag when compared to the diesel equivalent, there’s a lot to recommend the Fiat e-Ducato. The firm has tried hard to retain the same range of variants, the maximum payload and a load volume that ranges from 10 to 17 m³. The motor is powerful and there’s enough torque to deliver a rewarding and comfortable drive, particularly on long journeys. If your business is looking at investing in a big electric van, then you must certainly shortlist the Fiat e-Ducato.

If you like the Fiat e-Ducato, then consider the Renault Master ZE, or the Mercedes eSprinter.

One of the big attractions for running an electric van is for the low running costs. This van will cost a few pence per mile to run, that’s around half of what a diesel-powered van costs. The amount can be reduced further by signing up to a cheap off-peak electricity deal when most firms will be recharging their e-Ducato.

Fiat says it has looked closely at the total cost of ownership for its e-Ducato and along with purchasing incentives, they say that the van will deliver real-world savings on fuel worth £13,000 over 95,000 miles of running, when compared with the diesel.

In addition, with fewer moving parts, the e-Ducato is around 40% cheaper to service than a diesel-powered variant.

The new e-Ducato offers a large van for just about every need. Indeed, the best-in-class payload is up to 1,885 kg, with volumes ranging from 10 m³ to 17 m³.

There are two trim levels for the Fiat e-Ducato, they are the Standard and the eTechnico. Plus, there are three configurations, the chassis cab, the goods van and the passenger van.

Opt for the eTechnico and the van’s features include a seven-inch display that is smartphone compatible and has satnav. There’s also reverse parking sensors with a rear parking camera, rear cross path and blind spot detection, LED running lights and there’s a leather steering wheel.

Fiat also gives a year’s subscription to a connectivity service so there is 24-hour support for crash assistance that will identify the level of the impact and send the van’s GPS position to its operations centre.

There’s also theft assist that will detect and alert the van owner to the tampering or unauthorised towing of the van.

Essentially, the Fiat e-Ducato offers similar handling to the diesel-powered version but it’s a lot quicker from a standing start. That’s because all of the battery’s power is available immediately and it will go from 0 to 30 mph in less than six seconds. The top speed is 62 mph and the charging time for the battery is two hours 25 minutes for the 47kWh battery.

Opt for the more powerful 79kWh battery and drivers get a range of 230 miles with the battery recharging time taking four hours.

There are three driving modes that deliver a nice balance between economy and performance. There’s also an Eco setting that will restrict performance to boost battery range though drivers can switch to ‘Power’ mode to deliver the battery’s full power. There’s even a ‘Turtle’ mode when the battery reaches a low level to activate a specific driving mode to extend what remains of the battery range. 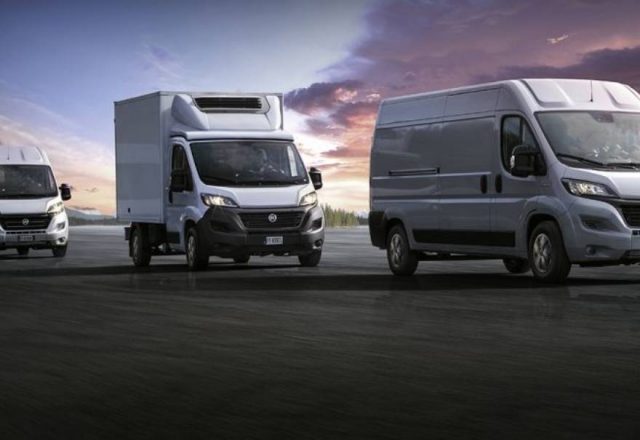 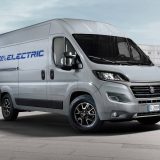