The ever-popular Ford Transit is a staple of van fleets around the UK, and the latest model is a great van to drive, packed with equipment and delivers impressive efficiency. It’s following in some big footsteps but with a wide range of payload weights and body styles, plus the no-nonsense abilities, the Ford Transit still sets the bar in an increasingly competitive segment.

The Ford Transit will still meet most needs from those wanting a very large van that is capable and suitable for a wide range of needs. The downside is that the latest Transit doesn’t quite match the technology and advanced safety features that many rivals now feature. Take a look at the Mercedes Sprinter, for example, and there’s a van maker responding to the growing need for car-like technology and driving abilities. A revamp of the Transit range in 2019 delivered some up-to-date additions including selectable driving modes.

The Ford Transit is the most intelligent, fuel-efficient, capable and productive two-tonne Transit van ever – developed to help businesses thrive in a modern operating environment.

More than 4,600 upgraded components, alongside advanced powertrain and driver assistance technologies, contribute to a Ford Transit that can carry more, uses less fuel and is easier to drive and operate.

Enhanced versions of Ford’s sophisticated EcoBlue diesel powertrains help reduce operating costs by delivering up to 7% fuel efficiency improvements, with up to a further 8% fuel saving offered by the Transit’s EcoBlue Hybrid powertrains – the first 48-volt mild-hybrid technology to be introduced to the segment.

“Ford is also setting the pace in electrification, with segment-first mild-hybrid powertrains ideal for deliveries.”

The Ford Transit has established itself as a popular van for decades now by offering a value for money creation that will meet most needs. There’s also a wide range of Transit centres so servicing will be easy for keeping the Transit on the road. It’s up against stiff competition such as the Sprinter, the Volkswagen Crafter and the Vauxhall Movano. One of its strong points is the large number of configurations available and along with the panel van, firms can enjoy minibuses, crew cabs, chassis cabs and tipper trucks. It’s also up against increasingly well-made electric vans and Ford is in the process of testing a battery-powered Transit which may be available in late 2022.

If you like the Ford Transit, then consider the Mercedes Sprinter or the Vauxhall Movano.

The latest Ford Transit uses the firm’s 2.0-litre EcoBlue diesel engines which are more fuel-efficient than the versions they replace. There’s also a selective catalytic reduction system to meet Euro 6 emissions. All Transits now have an AdBlue tank that will last for 6,000 miles before needing to be refilled.

Ford has also added automatic start and stop for boosting economy, along with a gearshift indicator and regenerative braking to deliver efficient driving. The Transit should return around 45mpg with the mild-hybrid version using a starter/generator to boost the economy up to 50mpg – though driving style will have an impact. For higher mileage runs, those impressive fuel economy figures should be achieved.

It helps too that the service intervals of 36,000 miles or two years, will reduce running costs.

There’s no doubt that the Ford Transit range is huge with a choice of panel vans, minibuses, chassis cabs and crew cabs. Ford also offers the Transit with gross vehicle weight that ranges from 2.9 tonnes and up to 5.0 tonnes.

The load volumes for the range extend from 9.6 m³ to 15.1 m³ – though some rivals offer 17 m³ which means the Transit may not meet every need.

The Transit has an improved load area with Ford adding tough plastic floor covers, a wider step into the load area and bright LED lighting.

It’s also an easier van to load and unload, particularly with larger items, and the rear doors open wide.

The latest Ford Transit underwent a rigorous testing regime covering hundreds of thousands of miles across a range of weather conditions and surfaces. That’s quite obvious when spending time behind the wheel.

The Transit is a reliable and rugged performer for everyday use and safety features include electronic stability control and there’s side wind stabilisation to deal with crosswinds.

And should the driver begin cornering too quickly, the ‘curve control’ technology will step in and help with braking to control the van before the driver loses control of it.

Handling is sound when the load area is full or empty and with a heavy cargo, the ‘load adaptive role stability control’, plus trailer sway control, brings confidence.

The safety features include intelligent adaptive cruise control that has traffic sign recognition, hands-free parking assistance aids and there’s a blind spot information system that covers up to 10 metres so will monitor a trailer.

Ford has also added its pre-collision assist that has pedestrian and cyclist detection to monitor for an impending collision and then prepare the van for impact.

Drivers will also enjoy the reversing camera with a colour screen, cornering headlights and lane-keeping assist.

The infotainment system uses a four-inch display which is much smaller than most rivals, but some models feature an eight-inch touchscreen which is more suitable. Bluetooth is standard, as is smartphone compatibility and the Ford Sync 3 system offers live traffic info, onboard Wi-Fi and remote locking using a smartphone – from any distance.

While there’s just one engine for the excellent Ford Transit, the 2.0-litre EcoBlue diesel unit, there are three engine power choices. There’s also the choice of rear or front wheel drive, and all-wheel drive.

The most powerful engine produces 182 bhp with torque of 415Nm. This power delivers a fine performance when at the van’s payload capacity and it’s a good performer around town and for motorway driving.

Ford also offers an engine producing 168 bhp that delivers a reason reasonable performance with a heavy load on long journeys.

The most popular choice is the engine delivering 128 bhp and torque of 385Nm. When fully loaded, the engine needs to be worked harder though the cabin noise becomes louder but for most users, this engine will meet most needs. 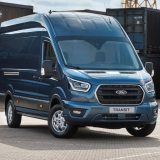 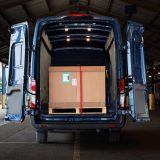 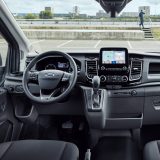 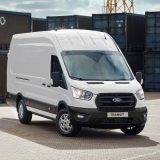 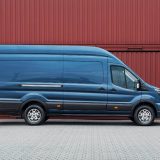 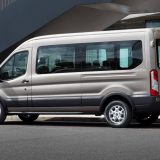