The new Ford Transit Custom PHEV offers a way for van drivers to bridge the gap between having full-electric and diesel performance. This petrol-electric hybrid still has a payload of more than 1,000 kg. It also a reasonable all-electric range that will be particularly attractive to fleet owners and urban van drivers. This was the International Van of the Year in 2020.

One of the big attractions for the Ford Transit Custom PHEV is that it is an ideal step for businesses or van drivers considering switching to an electric van – but without having the hefty price tag. This is a plug-in hybrid electric van with a small petrol engine and an electric motor so there’s the potential for zero-emissions driving but for short periods. The van has been extensively tested in the real world by Ford and it’s a clever and capable plug-in van worth considering.

Trials by Ford across Europe have shown how PHEVs offer a practical every-day solution for van owners and businesses working in the city, enabling them to complete longer journeys when required.

As the vehicles aren’t reliant on charging infrastructure there is no range or charge anxiety, meaning vehicles such as the Ford Transit Custom PHEV can deliver the best of both worlds: zero-emission driving capability with no compromise on getting the job done. There is no reduction in payload or load volume compared with a conventional diesel model.

Mark Harvey, director of enterprise connectivity, said: “With their zero-emission capability with no range anxiety, PHEVs offer a practical, flexible alternative to diesel, making them ideal as general-purpose vehicles for work in and around cities.”

Among the reasons to buy the Ford Transit Custom PHEV is that it is in a marketplace of one. Other than the LEVC VN5 – which is based on the London taxi – the only real rivals to this petrol-electric hybrid are other electric vans. It’s a nimble performer around town, there are zero emissions from the exhaust when using battery power and it has the same payload as the diesel-powered sibling. While this van does not have the range of all-electric rivals, for example, the Vauxhall Vivaro-e, there’s still a lot to like for those who want the best of both worlds to meet changing legislation and customer demands.

If you like the Ford Transit Custom PHEV, then consider the LEVC LN5 or the Vauxhall Vivaro-e.

While the Ford Transit Custom PHEV is more expensive to buy than its siblings, it does offer the potential for very low running costs. For those who are working on multi-drops around town, for example, then you may well find that the all-electric range of 35 miles is adequate for your every day needs. The 1.0-litre EcoBoost petrol engine can then be used as a backup to offer a combined range of 300 miles – and you may not need to tank up regularly.

The Transit Custom plug-in hybrid has a 13.6kWh battery which takes just over four hours to recharge from a standard wall socket, or around 2.5 hours from a wall box. This means that you could sign up to a cheap off-rate electricity deal and find your running costs are just a few pence per mile.

It’s also worth mentioning that the Transit Custom PHEV is exempt from congestion charging zones and ultra-low emission zones, for example, like the ones in Birmingham and London. For those driving in central London, there’s a potential for saving money every day. However, the van uses Geofencing so will switch to battery power when driven in these areas.

The maximum load volume for the Ford Transit Custom PHEV is 6 m³, while the payload has been reduced (slightly) to 1,130 kg. There’s just one size of van available for drivers, it’s the standard height L1 H1 with three trim levels. This means the maximum load length is 2,554 mm and it has a width of 1,775 m.

The interior for the Ford Transit Custom PHEV is similar to the siblings and it’s a car-like offering. Vision is good from the driver’s seat, there’s a low dashboard, lots of storage and there are two-part mirrors. There’s also plenty of equipment, depending on the trim, with heated front seats, air-conditioning, a heated windscreen and heated door mirrors fitted as standard. Among the options is an eight-inch display and the instrument display consists of two fuel gauges to highlight the battery charge and petrol level.

There’s also more security on the Transit Custom PHEV with an improved central locking system and a warning sent to a smartphone with the FordPass Connection should someone break in and start the vehicle.

The big difference for driving the Ford Transit Custom plug-in hybrid is that it is much easier to drive. You simply get in, start the van and drive off. There are no gears, so you simply select the drive mode and settle back into a comfortable and refined drive driving experience. There’s also plenty of accelerating performance from a standing start, unlike the diesel sibling that can be a slow-moving when fully loaded.

And since there’s a heavy battery pack underneath the load floor, this is an agile van to drive with light steering. And even when fully loaded, it rides well. 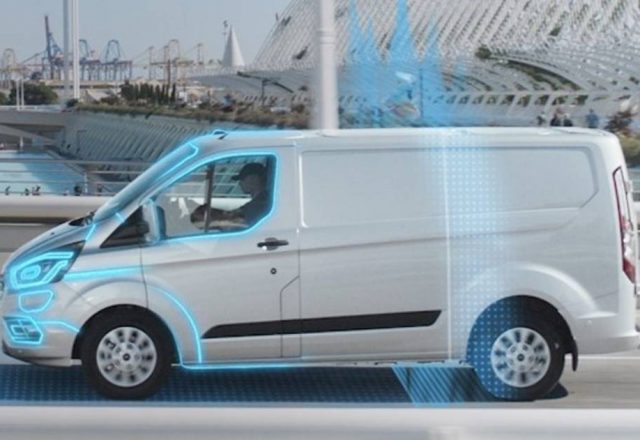 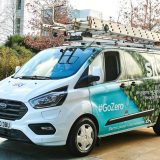 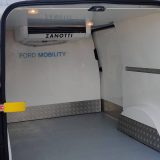 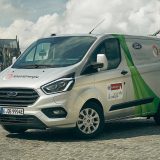 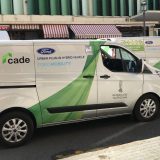 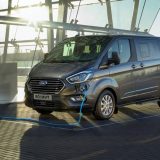 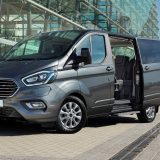