The Toyota Hilux has been around for decades now and it’s still one of the best pickups available to buy. It’s not only durable and tough, but the latest version also delivers a car-like cabin and a comfortable ride. It’s not a cheap pickup but the Hilux does have a solid build and great driving dynamics. A revamp in 2021 so the introduction of a powerful 2.8-litre diesel engine.

While it’s one of the best-known pickups, the Toyota Hilux has not been resting on its laurels and the carmaker has been regularly updating its offering to be one of the best. It still has a go-anywhere ability, and the double cab Hilux is worth considering for those who need to work during the week but have a decent family car for the weekends.

The new Toyota Hilux brings a striking new frontal design, a more powerful 2.8-litre engine option, new equipment features, added comfort and improvements in performance both on- and off-road. The mid-life changes will strengthen the world-famous pick-up’s appeal with a growing number of customers who need a vehicle that’s right for both their business and leisure needs.

At the top of the new-look range, the Invincible X grade comes with additional strong styling elements, a high-quality interior and premium equipment features, combined with all the toughness and go-anywhere capability that have made Hilux one of the world’s best-known and most popular pick-ups.

Since the original model was launched in 1968, Hilux has time and again proved its unstoppable character, conquering the North Pole, Antarctica and Icelandic volcanoes and, in competition form, winning the gruelling Dakar rally in 2019.

The new 201bhp 2.8-litre turbodiesel engine is available for Invincible and Invincible X models, along with six-speed manual or an upgraded six-speed automatic transmission.

A revamp in 2021 added more technology and comfort to the Toyota Hilux. There are still tax breaks for those company car drivers wanting a commercial vehicle with an impressive one-tonne load. There’s also a very good warranty to bring peace of mind and businesses and private owners should be looking at enjoying many years of use.

If you like the Toyota Hilux, then consider the Isuzu D-Max, or the Ford Ranger.

The engine produces 201 bhp and impressive torque of 500Nm. With the manual gearbox, the torque is 420Nm.

The 2.4-litre diesel engine is a more powerful offering with the 0 to 62 mph sprint time reduced by 2.1 seconds, in the automatic transmission version, to 10.7 seconds.

Fuel economy for this engine is around 33 mpg with the manual gearbox, and slightly less for the automatic transmission.

Running costs can be lowered with a new ‘Drive mode’ switch so the driver can choose between power and Eco settings. With the latter, power consumption is reduced to boost fuel economy, while ‘Power mode’ delivers a sharper throttle response.

Fuel emissions are 263g/km for the two-door Hilux, and 250g/km for the extra cab versions – which means the Benefit-in-Kind rate for business owners will not be cheap.

The Toyota Hilux is also available with a 100,000 mile, or five-year warranty with the first year being unlimited mileage.

The Toyota Hilux comes with a choice of either single, extra or double cab variations which have an impact on the load carrying abilities.

The payloads are at least 1,000kg for every model and up to 1,030 kg on the top versions. Every model is capable of towing 3.5 tonnes.

The load bay length is similar to most rivals, but the Hilux really sets itself apart for the width – it is now 130mm wider than before. That means of you are carrying wider loads, this might be the pickup for you.

As one of the market leaders, the new look Toyota Hilux is packed with equipment.

The firm’s latest infotainment system has been fitted with a touchscreen display with the Invincible X offering satnav.

The system is also smartphone compatible and there’s an impressive onboard sound system.

The Toyota Hilux features all-wheel drive as standard on all models sold in the UK.

The off-road performance is still second to none and has been enhanced with an electronic limited-slip differential.

On the road, the suspension delivers a comfortable ride and for the 2021 model, the shock absorbers have been retuned.

Indeed, the rear suspension offers what is near SUV-like stability and comfort, while driving with impressive road manners. There’s little in the way of body roll when cornering.

And when taken off-road, the Toyota Hilux is still an impressive vehicle.

All-wheel drive can be activated quickly, and the system will brake the slipping wheel should it detect a loss of grip. There’s also active traction control which operates when in all-wheel drive.

Unlike some rivals, the Hilux has a pitch and bounce control system that will adjust the engine’s torque automatically to suit road conditions so there’s less body pitching to deliver better handling and a more comfortable ride. When in use, it is a noticeable and great feature.

For the money, there’s a lot to like about the Toyota Hilux pickup and it’s an impressive offering from a carmaker that really is delivering what drivers and owners are expecting from a vehicle that is renowned as being ‘unbreakable’. 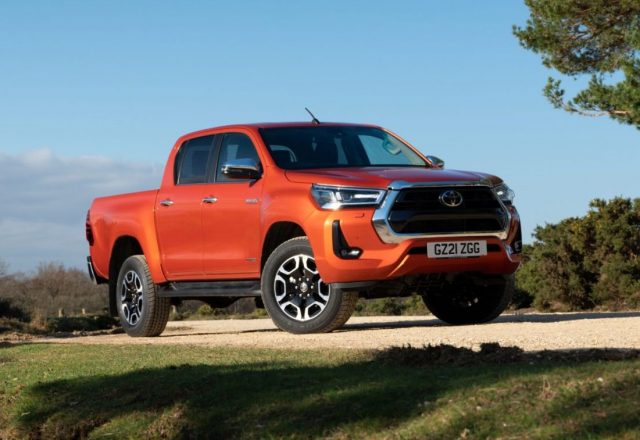 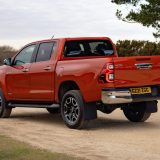 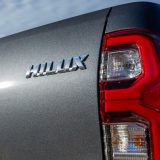 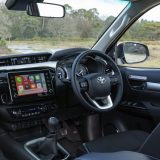 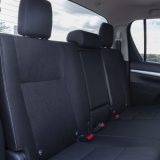 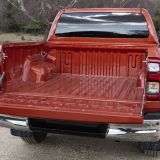