The latest version of the Toyota Proace panel van has gone on sale with more equipment and some styling tweaks.

The first deliveries are expected in October and the panel van now features the firm’s Smart Cargo system as standard.

This adds a load-through flap to the cargo bay bulkhead, so the Proace’s maximum load length increases by 162 mm.

The system also offers a lift/folding function on the passenger seat so the maximum load length can be extended by 1,162 mm, and the overall load volume for the van increases by half a cubic metre.

There’s also extra lumbar support for the driver’s seat, plus an armrest, with the folding passenger seat now doubling up as a worktop. A boon for drivers on the road.

The entry-level Toyota Proace features manual air-conditioning and an alarm, and there’s an inbuilt satnav system fitted as standard.

There is still a choice of four diesel engines – like the current line-up.

For those Proace models with a 1-tonne payload, there’s a 1.5-litre four-cylinder diesel unit developing either 100 bhp or 116 bhp.

And for those models that have a 1.4-tonne payload, there’s a 2.0-litre turbocharged diesel unit developing either 119 bhp or 172 bhp. 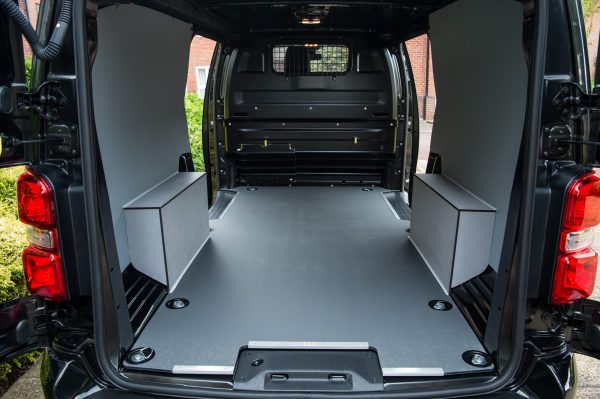 The entry-level Compact model still retains its tight 11.3m turning circle, so it is easy to manoeuvre in built-up areas. It too has the Smart Cargo system and offers a load capacity of 5.1 m³.

They all feature right- and left-side sliding doors, as well as side-hinged rear double doors that are capable of opening to 180°.

For the Medium and Long versions of the Proace panel van, the side door is wide enough to allow Euro pallets to be loaded easily.