The Ford Transit Connect is a small van that’s getting on now, but a new replacement is scheduled to be unveiled and available in 2022. Until then, drivers still get a cracking small van that delivers a great driving experience and is fairly cheap to run.

The Ford Transit Connect is a small van in the Blue Oval’s van line-up and this model was unveiled in 2013, revamped in 2018 and again in 2020 which saw the addition of the Active Lifestyle version. A new model will be unveiled in late 2021 and available the following year.

The Transit Connect features a six-speed manual transmission as standard for all engines. Customers who prefer an automatic gearbox now have the option of Ford’s eight-speed automatic transmission, offered with the 100PS and 120PS 1.5 EcoBlue engine variants, and engineered to further optimise fuel efficiency and deliver responsive performance.

Features for the Transit Connect include:

Faster, more precise shifts are enabled by a Casting-Integrated Direct-Acting Solenoid, and fuel efficiency is enhanced with ultra-low viscosity oil. The transmission has been tested to Ford’s ultra-tough commercial vehicle durability standards.

The new Transit Connect continues to offer commercial vehicle operators an outstanding breadth of capabilities, with short and long wheelbase options providing load volumes up to 3.6m3, payload capacity ranging from 410kg to 900kg, and body styles including van, kombi and double-cab-in-van.

If you are looking for a small van that offers a car-like driving experience and lots of practicality, plus a cosy cabin (that is vastly improved from the original version), then the Ford Transit Connect is the small van for you. The Transit Connect Active range is worth checking out, though it’s really geared towards those wanting a lifestyle vehicle for outdoor adventures, but it may also meet a wide range of commercial vehicle needs.

If you like the Ford Transit Connect, then consider the Volkswagen Caddy or the Vauxhall Combo.

One of the big attractions for the Ford Transit Connect is for its running costs. It enjoys reasonable mpg though the EcoBoost 100 petrol engine returns just 46 mpg and lacks torque when the van is fully loaded.

The 1.5-litre EcoBlue diesel engines return a more impressive 64 mpg in both L1 and L2 body guises, though the fuel economy drops with the eight-speed automatic transmission versions to around 57 mpg. There’s also a stop-start version to boost fuel economy and a speed limiter to reduce fuel consumption.

The Ford Transit Connect is a reliable van with low running costs and the service intervals are every 24 months or 18,000 miles.

The Ford Transit Connect in the L1 guise offers a load volume of 2.9m³ and the payload ranges from 579kg to 718kg – depending on the gearbox and engine chosen.

It’s worth noting that some rivals who have larger payloads, for example, the Citroen e-Berlingo, can carry more than 1,000kg.

However, the L1 can carry two Euro pallets, and the L2 has the option of a load-through bulkhead.

Access to the load space is easy with 50:50 split backdoors that will open to 180°, and there’s a sliding side door to make things easier too.

Since the Ford Transit Connect is getting on, there’s a reasonable amount of equipment, though there’s a lot of optional kit that some rivals will add as standard.

Options include the active city stop system that will apply the brakes automatically to avoid an accident.

There’s just one driver’s airbag, the passenger airbag is an option, while some models also feature side-impact airbags.

There’s a lot to like about the Ford Transit Connect, it really does deliver on what most van makers are searching for and that’s car-like handling.

It’s a rewarding van to drive around town, and it’s a smooth motorway cruiser too.

Overall, the handling is composed with little body roll, and the steering gives good feedback.

It is undoubtedly one of the best vans to drive in its class, though the suspension does deliver a harsh ride on rough roads and when there’s no cargo, the ride can be firm.

There’s a good choice of engines, and most drivers will be happy with the diesel unit producing 74 bhp with a decent torque range and an impressive six-speed manual box. 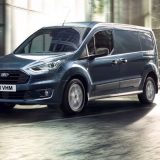 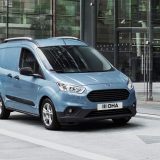 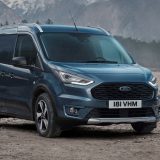 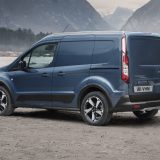 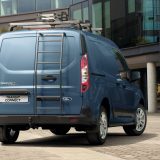 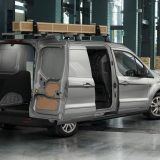 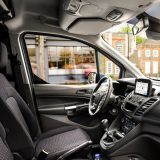