The Mercedes Citan is based on the Renault Kangoo but is a much better van – the three-pointed star has polished the original offering and pushed up the quality to warrant the price tag. A new Citan is planned for launch in 2022 but the latest model still has a lot to recommend it.

The Mercedes Citan was launched with much fanfare, and it’s based on the Renault Kangoo – Europe’s bestselling van – and is made in the same factory. And that’s where the issue is; Mercedes has effectively redesigned the entire van, put their badge on the front but they have never really managed to claim the premium price for it. Is the Citan worth more than the Kangoo? We don’t think so, but you should road test both versions.

The Citan may be the smallest van in the Mercedes-Benz range, but it really is big on the things that matter. Available in two different lengths with impressive loading capacity, fuel consumption of up to 62.8 mpg, and ECO start/stop functionality, the Citan is designed to be your perfect business partner.

Because there’s no such thing as too safe, Mercedes-Benz has an enviable and justified reputation for the emphasis placed on safety. The Citan comes with a range of standard and optional safety features to protect one of your business’s biggest assets: the person sitting behind the wheel of the van.

As prestigious small vans go, the Mercedes Citan offers a lot of potential. It’s the firm’s smallest van and made in partnership with Renault. It’s a versatile and comfortable van to drive with three models and three body lengths. The new model will have two body lengths – the smallest version has been dropped. There’s also a crew van version available too. There’s a lot to recommend it but perhaps the price tag needs careful consideration and a new model is in the pipeline.

If you like the Mercedes Citan, then consider the Renault Kangoo or the Volkswagen Caddy.

There’s a 1.5-litre diesel engine under the bonnet producing 90hp and an alternative produces 110hp. Both have front wheel drive and are mated to a six-speed manual gearbox.

The new model will retain the turbocharged 1.5-litre diesel unit, plus there’s the option of a 1.3-litre petrol unit that’s also turbocharged and an electrified version (along the lines of the Kangoo ZE) will also be unveiled.

The most powerful petrol engine produces 129hp which makes it a great choice to drive around town.

The new model also features the option of a seven-speed automatic transmission on some engines, though it is likely the manual will retain its popularity.

Another positive for the Citan is that the service intervals are every 24,000 miles and the insurance grouping is reasonable.

With a range of body lengths, the load space available for the Mercedes Citan will appeal to a wide range of buyers. The smallest van is 2.4 m³ and the passenger seat folds flat to extend the floor length. Other load volumes are 3.1 m³ for the long model, while the extra-long version delivers 3.8 m³.

A Euro pallet can be fitted between the wheel arches width ways, and the larger Citan delivers a load area that’s 1,753 mm long.

The Citan has asymmetric rear doors fitted as standard and the option of a top-hinged tailgate. Also fitted as standard are four, six or eight load lashing rings – depending on the model, and other options include roof racks, towing equipment and a roof flap fitted at the rear.

The Mercedes Citan comes with electronic stability control fitted as standard and will help keep the van in control when driving on slippery surfaces. The system works by compensating for the van’s load and intervening to help when necessary.

However, the Citan scored a disappointing three stars when crash-tested by Euro NCAP – something Mercedes says it will improve for the next model. Safety kit also includes a driver and passenger airbag with side airbags as an option.

Mercedes has also fitted an immobiliser as standard, and an alarm system is an option. There’s also a full-height steel bulkhead with the option of a folding bulkhead.

Other options for the Citan include a reversing camera, a DAB radio and a satnav.

One of the bonuses for the Mercedes Citan is for the comfort levels and it’s a nice van to drive with car-like handling. The engines perform well and it’s no slouch on motorways either.

On the new model, the suspension has been retuned with improved damping and spring rates to deal better with rough roads, particularly when carrying a heavy load. It will be even more car-like for its driving experience.

When fully loaded, the ride is refined and the weighted steering gives good feedback. 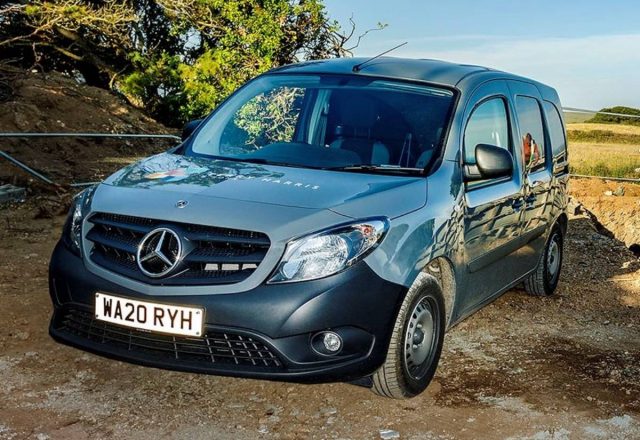 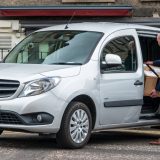 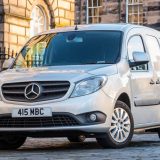 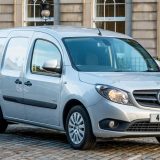