The Renault Kangoo ZE was one of the first all-electric vans available and lots has changed since its launch in 2011. The latest version appeared in 2021 with better comfort and an improved battery range. This is Europe’s best-selling small electric van with the firm shifting more than 50,000 units. It’s still an interesting van for those who want to switch to battery power and it’s worth shortlisting. If you can wait, the Kangoo e-Tech with a range of 164 miles is scheduled to appear in 2022.

With growing numbers of firms looking at switching to battery power, there’s a lot to recommend the Renault Kangoo ZE electric van. The newest model was unveiled in 2021 and for many reasons, it’s the best version in the Kangoo range. It’s a quiet and refined offering with the same load volume you’ll find in the standard van, though it is starting to look dated now.

The all-electric Renault Kangoo ZE is Europe’s best-selling electric van, it delivers a car-like driving experience and levels of comfort, a practical load area of up to 4.6 cubic metres.

The 100% electric, zero-emissions-in-use Renault Kangoo ZE has a potential range of up to 143 miles (WLTP) and can be charged to 100% in six hours when using a 7kW wallbox.

The Business+ specification adds extra equipment, such as electrically operated and folding door mirrors, one-touch driver’s electric window, metallic paint and rear parking sensors. Depending on the model, it offers a load area of up to 4.6 cubic metres.

The Renault Kangoo ZE costs from £19,380, excluding VAT, after the Plug-in Van Grant.

There are several reasons to buy the Renault Kangoo ZE, including the fact it is the best model in the range and it has very low running costs. The latest model has a completely redesigned exterior and there’s a more upmarket feel – that’s down to the new materials and improved equipment. It’s still a versatile and practical van but this is becoming an increasingly competitive small van segment and the update keeps the Kangoo ZE fresh but there are slightly better alternative choices.

If you like the Renault Kangoo ZE, then consider the Nissan e-NV200 or the Citroen Berlingo.

Since the Renault Kangoo ZE is powered by a battery, the running costs are low. They will be lower still if you sign up for a cheap electricity deal because most firms will be recharging overnight.

The battery choices are either 33kWh or 44kWh, and one big issue with the Kangoo ZE is that there’s a claimed range of 143 miles, but most firms will find a single charge will deliver around 124 miles. In cold weather, that will be lower still with a potential of 75 miles.

Using a three-pin socket, the van will take 17 hours to recharge – use a wallbox and the time is six hours. The Renault Kangoo ZE does not have facilities for rapid charging – which will do little to reassure firms with ‘range anxiety’.

The Kangoo ZE also comes with a 100,000-miles or five-year warranty, along with a 100,000 mile or five years’ service plan. There’s also Renault assistance breakdown cover.

The load space for the Renault Kangoo ZE is the same as its non-electric sibling. It’s available in two lengths with load volumes of either 3.3 m³ or 3.9 m³ for the standard version. Opt for the longer version, and the volume increases to 4.2 m³ and 4.9 m³. The 2021 model features a more powerful battery which takes up the same amount of space as its predecessor underneath the load floor so load volume is not compromised. The Maxi Crew adds a rear bench for three people, while the Maxi Crew Cab offers a multi-positional bulkhead to carry more cargo on more passengers.

The Renault Kangoo ZE has a limited list of standard equipment for the Business trim but there is the option to preheat the cabin, or cool it, to help boost the battery’s range. The Business+ model has a £600 premium, but Renault says it features equipment worth more than £1,000 over the Business trim. Owners get body-coloured rear and front bumpers, a central armrest, metallic paint and powered folding door mirrors. There’s also a rubber floor for the load area and an overhead parcel shelf. The trim also comes with rear parking sensors and one-touch electric front windows.

The interior is fairly functional with lots of parts found on the Renault Clio. Everything is within reach and is easy-to-use and the small infotainment screen has the option of satnav.

As with most electric vans, the Renault Kangoo ZE delivers impressive speed from a standing start and it’s a nice van to drive around town, particularly for multi-drops. The power output is fairly modest and when heavily loaded, the motor is put to the test at speed. This is a zero-emissions van, and the new, larger battery and punchier electric motor are better than the model it replaces but the electric running gear is fairly basic for a commercial vehicle. 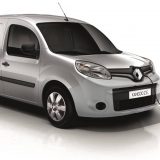 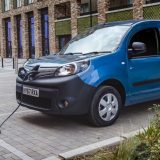 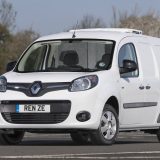 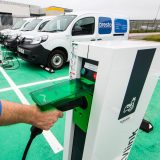 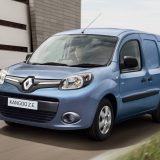